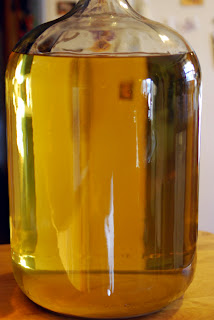 Last May I set out to make dandelion wine again. I shared my initial experiment in 2009 and what I was doing in 2010 with my windfall of fresh VT dandelions in my post "For The Love of Dandelion Wine" early that month. This time I was making a full 6 gallon batch which would net me about 30 bottles. I knew from the first batch in 2009 that it would take some time to clear and patience was a virtue in letting it do so. So it is now almost 1 year later and it is as clear as it is going to be and ready to bottle.

Two weekends ago I cheated and took two bottles off the top of the resting carboy and served them at our charity wine tasting. It was a hit and something most of the guests had never had before.

If you have never had dandelion wine before, and it can be made in many variations, it is difficult to describe. It is part leafy greens and part citrus, and mine has just enough sweetness to blend the bitter elements into a light fruity and refreshing warm weather wine. In the glass it has a light straw color and a pungent aroma that you know must be some type of plant.

During this past week's #winechat I was given the link to a source of a video about dandelion wine. It is the story of a woman who lives off the grid in Wyoming and amongst other things she does to sustain herself, she makes dandelion wine. Her ingredients, process and passion are on display during the 7 minute video. Her process is not all that different than my own and it made me smile. I noticed she used raisins in her wine. I haven't done that in my dandelion wine, I have in other fruit wines, and I know exactly what that would do and must try it the next time. The additional body and grape wine characteristics would certainly take it up a notch. She also used ginger and a combination of orange and lemon, which again seems like a worthy experiment for this year. 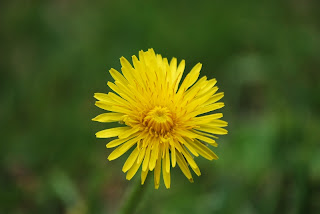 We will be up at the house in VT several times again this spring and I sincerely hope I can bring home at least some dandelions to make another batch. I look forward to trying some recipe alterations and continue what is becoming an annual tradition in my little New England home winery.

Here is the video about Miss "V" and her dandelion wine.

It's Time for Dandelion Wine


This video came from the Wyoming 2011 Short Film competition. Make sure to check out the other entries and vote for your favortie at the contest web site.

Jason
Posted by Jason Phelps at 8:28 AM

My mother used to make rhubarb wine every year and one year she made elder blossom (not elder berry, but blossom) wine. They were all great - a bit dry, a bit strong.... She never did dandelion, tho. We had 500 vines at our last house - that cured me forever from wanting to make wine LOL

Chris raves about dandelion wine, but sadly, I've never had the opportunity to try it. Hope it comes out fabulous! I'm sure it will!

Everytime I write about dandelion wine I find more an more people with a story of their own for it. In an earlier time it was made out of practicality, dandelions were everywhere and were food, so many people have family stories about it. I will be attending a family reunion sometime soon and can't wait to share my version of dandelion wine with relatives who have told me about their memories of crocks of it in the basement of a family home.

@Amy - we'll have to plan that get together so I can share some of ours with you.