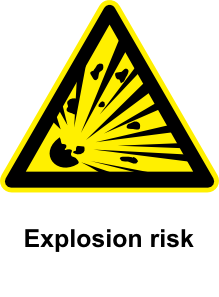 I think I’ve always been a little put off by red wines that trend to and beyond 15% alcohol. I'm not a fan of whites like that either, but I don't feel I come across them as much. Most often I get in this mode when wines are driven by the aromas and textures of too much fuel. In most cases the wines are otherwise sound, balanced and enjoyable. Until recently I casually dismissed the alcohol as just a consequence of a warm growing climate where super-ripening is just business as usual.

Not this week! During a recent Boston Sommelier Society tasting I experienced three wines in a row (our whole red flight and second half of our blind tasting) that were all 14.5% or higher as stated on the label. Factoring in the +/- margin allowed in alcohol labeling in the US (and they were all domestically made) they could all have been well over 15%, with one potentially reaching 17.1%!!! I was offended at how the wines screwed with my nose and palate. One of the wines had enough wood in it for a genuine fear of fire!

The wines were again laden with fruit, earth, noticeable tannins, healthy acidity and otherwise enjoyable characteristics, but I had trouble getting past the alcohol. Frankly, the wines didn’t need all of it to be enjoyed. For me that meant they weren’t well balanced. There was healthy confirmation of the alcoholic strength of the wines at the table, but varying opinions on the balance of the wine despite this fact.

My wanabe rant ends here. The subject of high alcohol wines is not new. As a hobbyist winemaker I understand the processes at work here and figured a different take on the issue would be required to make an attempt at a rant a worthwhile read in the end.

I began writing this post on the bus ride home after the tasting and got the first three paragraphs out before I had thought much about where to take it. The next day I read "In Pursuit of Balance" at Steve Heimoff’s blog, which kicks around the same topic. The link was shared on Facebook by Andrew Murray (AndrewMurray Vineyards) and the comments from both he and Adam Lee (Siduri Wines) got me thinking.

How should consumers react to a wine when their final impression is that it is unbalanced. Is high alcohol a singular issue with a simple remedy? 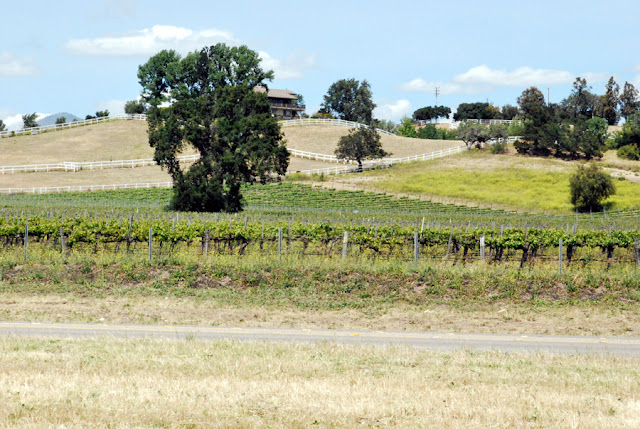 The comments to the original post were most useful fodder for the consideration of how to make my argument meaningful. The final product here is the combination of vineyard fruit in concert the winemaking staffs' decisions and actions. The alcohol level is part of that. The need to take action to balance wine must pre-fermentation for any reason, sugar and the resulting alcohol being just one, is nothing new and is the charge of the people tasked with making the best wine they can. The decision not to intervene then becomes a corresponding creative choice, a choice with the same risk to that of action; that if the final wine is out of balance in some way it may be presented to customers in that form.

In one comment on the Heimoff post Adam provided harvest numbers for fruit from Hirsch Vineyard in the years 2009 through 2011. I've summarized that information here.

In 2009 when the Brix (sugar level) of the grapes was at its highest, thus more alcohol, the acidity was also the strongest eliminating the need to add acid to balance the must they fermented the wines from. The Brix trend in 2010 and 2011 was down (by 1.2% potential alcohol from 09 to 11), yet these were the recent vintages that required an acid addition. From the winemaker’s perspective Adam makes it clear that the 2009 grapes came in from the vineyard better balanced, requiring less intervention. Fair enough. Adam didn’t mention any objective differences he observed in the products, and without tasting them myself it would be hard for me to really say what difference this could make to the consumer.

I wondered would the 2011 wine with 1.2% less alcohol offer the same fruit character, acidity and tannins as its older sibling from 2009? If so, I might prefer the wine at 13.3% alcohol and would see the intervention as a positive act, producing what I thought was a better balanced wine. Or I might not.

The point being made was that when action was needed based on the balance of sugar, pH and strength of the grape’s acid content, it was NOT the year the sugar was the highest! The lingering question which Adam left the reader with was “So in which vintage was the juice more balanced and in which vintage will the wine be most balanced?”

Good point. The sweet spot in any year for what a winemaker might be seeking in fruit could naturally contain the potential for higher alcohol. Will the final wine be any better or worse balanced in this situation? A winemaker’s decision to act or not should tell us something. They think the final product is going to be made best with or without a particular intervention. We indulge their passion and experience because we want to enjoy the outcomes right?

The ultimate perception of balance is on the palate of the consumer though, and exactly what that means in any one situation is just as dynamic as the choices made to produce a wine. It is likely that between two wines made from the same fruit by different winemakers, making different decisions that neither would be consistently labeled balanced or unbalanced by a panel of tasters. From this I conclude that there is no objectivity in discussing what someone should have done to make a “better” wine. Unless a wine is universally flawed, all impressions of it are personal and in some case may be unique enough that they can’t be reconciled by others. 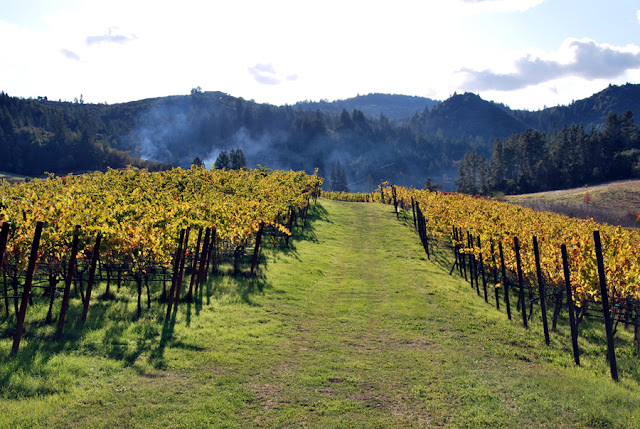 ( Vines at Michel-Schlumberger in Sonoma )

I exchanged a series of e-mails with Adam as I was trying to coalesce the ideas bouncing around in my head on this topic. Some of my initial thoughts were tangential or were narrowly developed and didn’t make good sense. Adam called me on several and offered his experience and opinion on others as requested. Yes, typically warm growing regions experience high levels of ripeness in grapes, but the balance of those grapes should be our primary concern. And as Adam pointed out, you get what you get and a lot of that is out of your control. Yes, there are people who claim that interventionist winemaking is some new demon and that there is a historical context for consistently high-quality natural wines not made with all the fuss. Actually there isn’t. Interventions in winemaking have been around since the origins of the craft (thanks again for the reminder Adam!), and producers have adopted lots of technology in the last several hundred years to actually improve their wines. Once again we benefit here, because their prior practices didn’t produce pleasant wine as frequently.

Ultimately Adam indentified a couple of considerations in how vineyard practices and winemaking decisions are a big risk mitigation puzzle, and you have to start over each year.

{Adam}
In 2011 we had two sections at two different vineyards (Keefer and Rosella’s – both 115 clone coincidentally) where the yields were so low, due to poor weather at set, that the vines never fully shut down, even after coloring up.  So we had active shoot-tips and laterals all the way up until harvest.  We discovered that these sections, even with a tiny crop, needed to hang longer to truly taste ripe.  It was odd…but much more of a vineyard/vine thing than it was a grape thing, even.

In 2010 we had fairly small crops across the board in California.  Despite an incredibly cool growing season, we had two tremendous heat spikes – one in late August and one in early September.  These, combined with the small crop load, pushed sugars up dramatically in Pinot Noir (however, not in later ripening varieties such as Cabernet or Syrah).  The heats spikes didn’t noticeably change acids, however, nor did they change the YAN numbers (yeast available nutrients)…thus we ended up with high alcohol, high acid, fast fermenting Pinots.

My point is that sometimes it starts with the physiology of the plant and other times with the grapes and sometimes things are out of your control but other times you can do things that help the situation (we prune 2 months later now at Pisoni than we did years ago….hoping to delay ripening.  That seems to help in most years).

{Jason}
Detailed examples of where weather and growth of specific vines in a particular season presenting new and different challenges to the winemaker before, during and after harvest. The change in pruning regimen in one vineyard is a great example of learning to work with the plant to push it to a balanced place at harvest. Note that it isn’t expected to work every year.

{Adam}
As far as the sacrifices of intervention go….any intervention has potential positives and potential negatives.  Any non-intervention has potential positives and potential negatives.  Choosing not to do something is making a choice with potentially negative implications.  The winemakers’ job is, in part, weighing the consequences of any decision or non-decision and deciding which course make the most sense.  In my opinion, a dogmatic approach (we always filter, we always fine, etc.) is just as problematic when it is equally dogmatic about not-intervening (we never chaptalize, never add water, never add acid, etc).  Both instances are occasions where listening to and learning from the plant and the grapes is a more prudent course than making wine based on safety or philosophy.

I think these statements bring closure to what I’ve learned after thinking about this subject. As wine drinkers we can describe whether we personally think a wine is balanced or not, can share what our sensory feedback is telling us to support out assessment, but there is no way (unless we are the winemaker) that we can be positive that the out of balance attributes were because of or in spite of any one potential choice by said winemaker.

Many such assertions could be the a cause, or it could be the weather, the shipping and storage of the wine, or personal taste. Assuming a fair taste at every turn, it may be that I personally find I don’t like high alcohol wines because they too often seem out of balance to me. If that is the case then I would need to take that as a personal reminder of what wines to buy for my own enjoyment. I would also need to keep that in mind when I reviewing wines that trended towards higher alcohol. Being fair to readers and expressing a sensory bias would at least make me look honest. Thankfully this is not currently the case and I expect I will be seeking out some tasty high alcohol wines to enjoy real soon. Who knows if I will find a three-peat like the wines above in my travels again!

Thank you to Adam Lee of Siduri Wines for taking the time to answer my questions and share his winemaking experience for readers.

In this pursuit of balance it is clear that both the producer and the consumer will benefit from better understanding each other, keeping the focus on the shared goal and not forgetting the new challenge to making great wine each year.

Jason
Posted by Jason Phelps at 11:55 AM