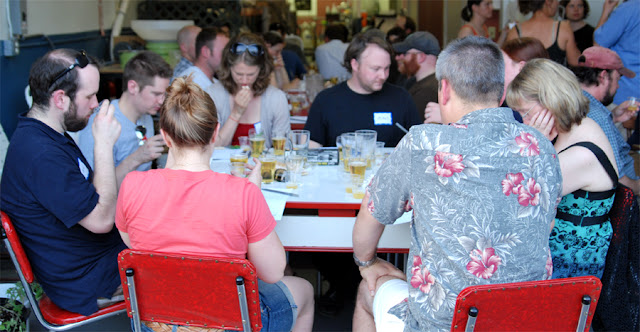 ( Look at all the serious beer lovers working those flawed samples over! )

I recently attended a beer flaw seminar at Throwback Brewery in Hampton, NH. I hadn’t yet visited the brewery so the class became a two-fer for me, a first visit AND additional education about beer flaws.

The seminar was organized with a short social hour at the beginning over beers and pizza. I ran into several members of BFD, the brew club I belong to, and met several new craft beer fans, including members of the Throwback team. I enjoyed tastes of four different Throwback beers including, Minime, Campfire, Maple Wheat Porter and the Rhubarb Wit. 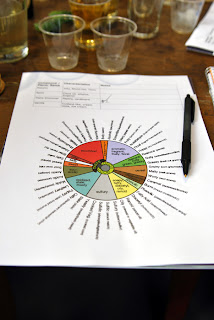 The Rhubarb Wit was my favorite, and I think the heat and humidity might have also had a part in that. The beer was crisp and refreshing with a hint of fruit. I found the Campfire a bit too smoky for my palate. The Maple Porter was familiar from my own maple beers in how the maple is really subtle and you have to focus to pick it up. Minime is a session IPA which is a pretty cool concept. It drank well, again most likely due to the weather, but it didn’t seem much like a true IPA as it was.

All of that said, let me put my feedback into context. Experimentation is the lifeblood of a brewer so me being mixed on any beer is truly a personal assessment. With small production comes pretty frequent rotation at the taps so my recommendation is to visit Throwback with some frequency to check out the regular and specialty beers.

The seminar was assembled in two flights of four samples, with PBR used as the control beer and the base for the doctored samples.

So what did I learn? PBR is a pretty neutral beer and for this type of application it works. I also learned that some flaws are easier to spot than others, mostly due to their prominent orthonasal (smell through the nostrils) identification, where some are a combination of orthonasal and retronasal features in concert with tastes.  Acetaldehyde (green apples), Diacetyl (buttery) and Trans-2nonenal (corked) are all dead give-aways from just the nose. DMS is still escaping me and combinations of flaws that have acetic, sour, buttery or sulfury aromas are hard to discern without more practice. 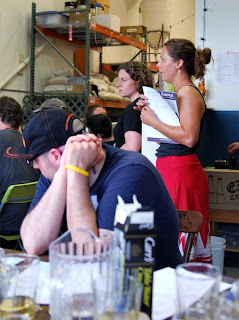 And practice we must. Both the positive and negative organoleptic properties of beers, wines, ciders and meads are learned; and continuous learning is the only way to keep your skills fresh and sharp. I wasn’t at all disappointed that I only picked out four of the eight flaws, and that was because the experience I gained in trying brought me farther along.

Thank you to Annette Lee and Nicole Carrier from ThrowbackBrewery for hosting this session. They were inspired by a similar session they participated at a recent homebrewers conference and clearly they knew the value of sharing it.

Thanks also go out to Ryan and Sean of 2beerguys and Andrea Stanley from Valley Malt for providing technical descriptions of the flaws and where in the brewing process they might be expected to show up.

Great review of the event!

The heat was a killer but everyone seemed to have a great time.

It was a fun class to co-host the class with Throwback. We expect to do more ...

Hope to see you there.

P.s. Please note that Ian was not able to attend, but Ryan was there :)