The World Champions of Chili Come to Manchester, NH What do you do when you live in New Hampshire and love chili cookoffs? You pitch the Mayor of Manchester on submitting a bid to host the World Championship Chili Cookoff!

And that is just what Mike and Mary Alice Kropp of Londonderry did. Their pitch led to Manchester beating out Las Vegas to host the 2010 International Chili Society (ICS) event. When Margot and I spoke with Mike & Mary Alice at the VIP Reception there was considerable excitement in the air. Although Mike didn’t win a shot in the red chili competition from the Last Chance cookoff, there isn’t much cause for sorrow; he will be cooking in both the Salsa & Chili Verde competitions on Saturday. Mary Alice is going for the “three-fer” qualifying to cook in all three competitions this weekend. 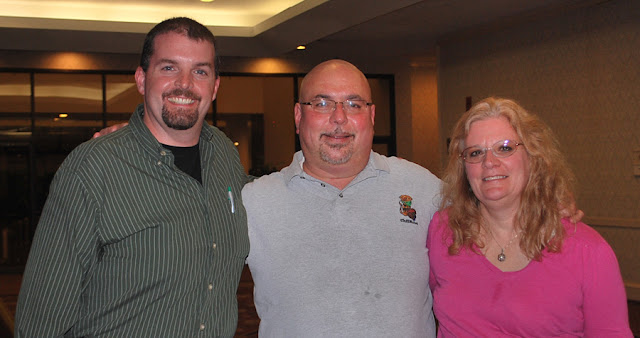 ( Jason, Mike Kropp, Mary Alice Kropp )
Earlier in the year we worked with Kiersten Stevens from Foodbuzz to get connected with Chris Wellington from the Manchester Economic Development office who is organizing the event. Chris arranged press credentials for us and invited us to the VIP reception for a chance to talk with city officials, organizers, competitors and judges about the cookoff.

Before the reception started we struck up a conversation with David & Alicia Garcia this year’s Idaho State Champions for Red Chili. They have been competing for over 10 years and “have won lots of second places until this year”. They shared a secret to their success with us. Alicia said that “constructive criticism has helped build a winning chili”. She confided that while she is very comfortable and enjoys cooking that “he (David) often says it needs a little of this or a little of that” and trying those things has helped them get better each year. This year they were especially proud of the chili tastings they held at local farmstands, drawing in big crowds, resulting in being asked to come back for three additional weeks because it was such a boost for the markets. This is their first time competing in the World Championship Cookoff. We wish them a lot of luck and will check in with them on Sunday during the competition and see how things are going 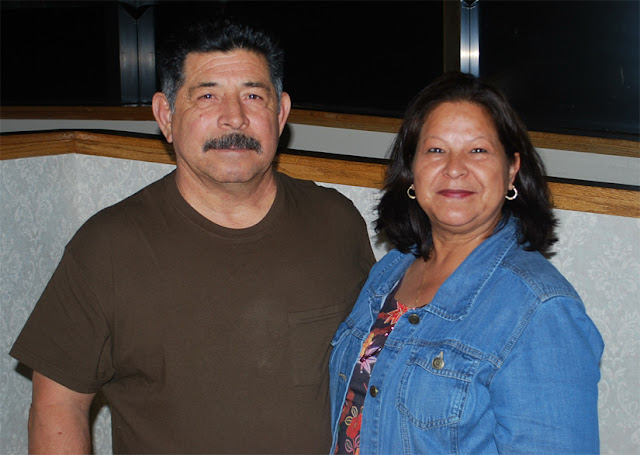 ( David & Alicia Garcia )
We next met up with Ron & Dolene Michel and Sharon & Ralph Wilkinson from Calgary, Alberta. Ron & Dolene will be judging this year and have been involved in organizing or competing in ICS cookoffs since the early 1980’s. Sharon & Ralph are competing in the Salsa competition on Saturday. Both couples will be spending some time in the area after the competition with plans to travel along the Maine coastline before heading back to Montreal to fly home. I’m sure we’ll run into them again before the last winner is announced on Sunday.

As the room filled up and we continued to talk with different folks we began to get a sense that there was a real family here. More than once we were told that the World Championship is a reunion of friends from all around the country that most likely don’t see each other but this one time each year. This feeling is worth exploring and so we had to seek out more excited people to find out more.

Next up was LeeRoy Watson and his daughter Michelle from Arizona. LeeRoy started competing in chili cookoffs in 2004 after friends pushed him to enter a competition being hosted by a local bar. Michelle used to help with the dishes for her father, but now she competes with him in the same category, Chili Verde!! Both LeeRoy and Michelle use similar recipes and share ideas, but have their own tweaks that they employ to personalize their submissions. Leroy explained that his basic recipe for a Chili Verde contains pork, Hatch green chiles, onions, jalapenos and of course spices. Chili isn’t all about heat and finding the right balance of spices and heat is the key to winning. LeeRoy is the 2010 Arizona State Champion and he and Michelle have been lucky enough to finish first and second together more than once! LeeRoy and Michelle said something we also heard from the Garcias, that they drove from home to the competition so they could bring the equipment they needed without any travel restrictions. LeeRoy said he has been feeding his coolers of chili meat with ice since they left on Sunday. A World Championship Cookoff can be overwhelming, and both Leroy and Michelle said “we were surprised at how many people there were” at their first World Championship visit in 2007. Since then they have found that the “chili community is very welcoming” and that being here is a lot of fun. LeeRoy made sure we knew that we had to stop by for a sample on Saturday. You don’t have to tell us twice!

We had a few procedural secrets shared with us that we found interesting enough to pass along. Competitors will have samples available for the public during the event Saturday and Sunday, but many could be serving canned chilis that they may or may not alter. LeeRoy and Michelle believe that they will be one of the few, or maybe the only, Chili Verde competitors serving their own homemade chili. The other item, and this one is even weirder, is that the competitors that choose to participate in the People’s Choice event must put beans, rice or other filler in their samples; something not allowed for judged entries. Pretty technical if you ask me.

We were lucky enough to meet and talk to Carol Hancock the current president of the International Chili Society. Everyone knows Carol and the “family” element came out in all the hugs and greetings she was getting. We asked Carol “why Manchester.” Her response, “the people were fabulous.” She also indicated she was taken with the beauty of Veterans Park when she first saw it and that the commitment made by the city to raise the funds to host the event was very strong from the beginning. Carol introduced us to several other people including her husband Dave, her son Greg and Fred Parker founder of the Hard Times Cafe chain of restaurants. Thanks for helping us meet more of the family Carol!

Fred and Dave filled us on some ICS history, notable figures and further defined what the chili family is all about. Caroll Shelby (yes, that Caroll Shelby for you car geeks) is the last living founder of what is the current International Chili Society and is credited by the society for his unending vision and support of mission of the ICS. What started as a showdown between two men for who had the better chili has now turned into an event that brings in competitors from around the world.

Fred mentioned Ormly Gumfudgin, another ICS founder who passed away in 2009, as having had a considerable influence building the family we were enjoying time with. He attributed a quote to Fred Wieland a long time chief judge for the ICS who had planned to be at the World Championship but unfortunately passed away earlier this year. “If you don’t have fun today, it’s your own damn fault!” Dave explained that “competitors help each other out” and that the chili community spans “all age groups” and “all kinds of people.” Both Fred and Dave cheerfully answered our question about how much money has been raised for charities through the ICS. Since starting 45 years ago the ICS has raised nearly $90 million for local charities all over the country. The family gives back! 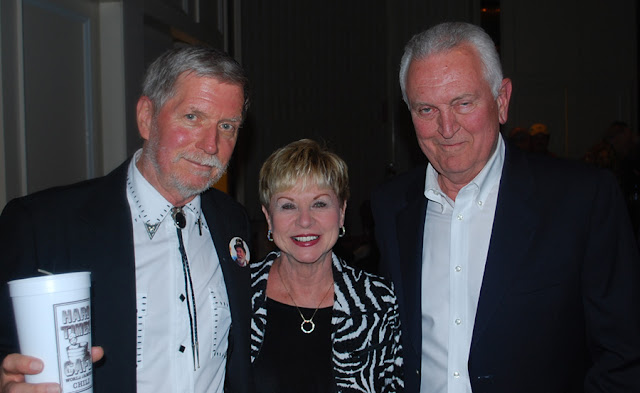 ( Fred Parker, Carol Hancock, Dave Hancock )
Margot caught up with Audrey Falkowski who with her husband Steve has been competing in chili cookoffs since 1989. Originally from California, but now living in New York State they are elated that the championships are being held in New Hampshire this year. In 1997 Steve was the first World Champion from east of the Mississippi River, something Jerry Buma from Massachusetts also did 10 years later. Audrey recalled how crazy the crowd at the Northeast Regional Cookoff went in May when the Manchester location for this event was announced. That’s right, we know how to party! Audrey demonstrated the family ideal almost as if on cue, searching out Mike and Mary Alice Kropp so that she could introduce us. Thanks Audrey! Steve also made a point to Margot that we should come by the judging booth so we could get another view of the cookoff. That is one invitation we will be sure to take.

We talked with Mike and Mary Alice Kropp for a while. They shared funny stories about their cookoff adventures, some inside scoop on how they search for ingredients and they even laughed about Mike’s lucky spatulas; but we will save those nuggets for our next installment. We hope to have good news to share about their salsa & chili them when we do.

Thank you to everyone who spoke with us, Chris Wellington for working out logisitics and Carol Hancock for helping us learn more about this wondeful and fun event. Come back tomorrow and Monday for competition reports and our thoughts on the sights, sounds and food of a World Championship Chili Cookoff.

Check out theses links and news reports about the cookoff.

Have you been to the Henniker chili cook off? They have one every year at pats Peak and I think it is the third Sunday in August.

I am a huge chili fan. Hopefully someday I'll get around to going to a cook off like this--for now I'll just live vicariously through your blog. Great insider info on the competition. Sounds like you guys are having a lot of fun!

I've always wanted to go to a chili cookoff!! What a fun evening.