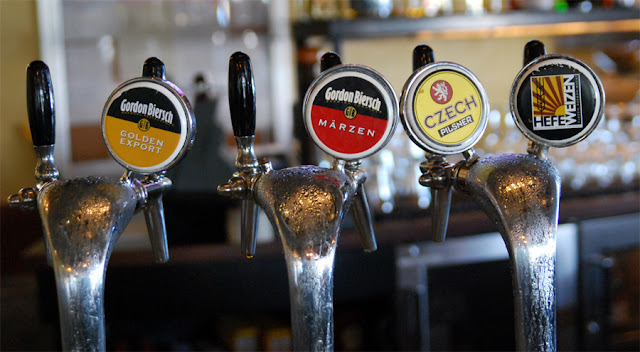 I continued my day one beer quest at the Harrison Street location of Gordon Biersch. Last week when I was judging for the NERHBC several of the example beers for the Oktoberfest/Marzen categories were from Gordon Biersch. One of my fellow judges suggested they might be one of the few others, Spaten also being another, that I might find domestically. Seeing the name come up in a brewpub search locked in a visit. A visit means a new chapter of learning for me, of trying several beer styles that are held out to represent the style so well that they are used to train BJCP judges.

I sat down in front of a sampler again, a very nice broad survey again, and got to work expanding my palate.

Light gold color with a slight haze. The aromas of rising bread was what I first noticed. The beer is surprisingly sweet, lightly but sweet, with a subtle hop influence and a clean finish. This is not a style of beer I am that familiar with, but this particular example has me thinking more about it.

A yellow gold color, unfiltered and cloudy. Pronounced aromas of banana and clove. This is very much a typical Hefeweizen. It is highly carbonated and very crisp. I found a touch of sweetness  in this beer as well. This is drinkable, almost to a fault. I could go way wrong with too much of this!

Golden color with hints of orange. Light malt aromas in the nose. The light malts come back in the mouth and are met with a bold, but pleasant hop bitterness. The hop flavor is in good balance with the malt.  Finishes dry and crisp.

I recommended to Margot that she consider this style of beer for her educational lineup in 2012. While it is boldly bitter I still think it would be a worthy beer to learn how to make. With the hop flavor being well balanced it doesn’t come off as a hop bomb which is one style she isn’t the biggest fan of. 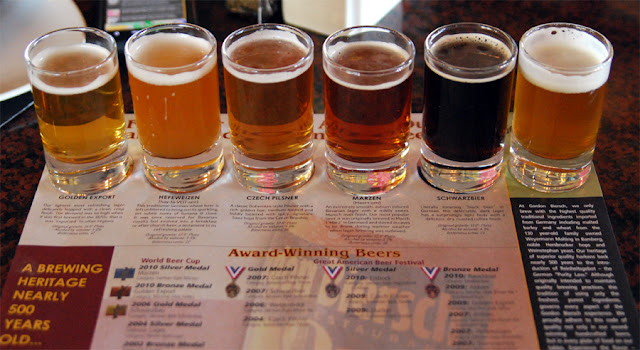 Light amber color. Aromas of toasted bread. The toasted bread translates into flavors as well, paired with hints of dried fruits. This beer is ever so slightly sweet. Immensely drinkable. This is definitely beer I would like to experiment trying to make. When made well I can see how the balance and generally moderate aromatics and flavors can result in a hugely drinkable beer.

This was the seasonal beer during my visit. Orange/gold color. I didn’t get a lot of aromatics, some light and mildly sweet malts did come through. The bit from the hop bitterness is noticeable. Another gently sweet beer. I would characterize this as whole grain bread. There were hints of tart dried fruits. I preferred the Marzen over this, but can understand this style a little better now having tasted one of the classic examples.

The Marzen was the favorite for me with the Hefeweizen being one I think that would appeal to a wide audience. All of the beers were tasty and clean, something that will clearly draw in lots of repeat drinkers.

So far I am digging my survey of some of the beers from San Francisco. I came across several styles in cans from 21st Amendment at the day one Foodbuzz Festival reception. I’ll share my thoughts on the evening’s drinks in an upcoming post.