My friends at WineMaker Magazine are having some technical difficulties with their blog software that has resulted the majority of my pictures from this post not being rendered when they upload them. The pictures are part of the story so I am reposting here so readers can have the full effect. 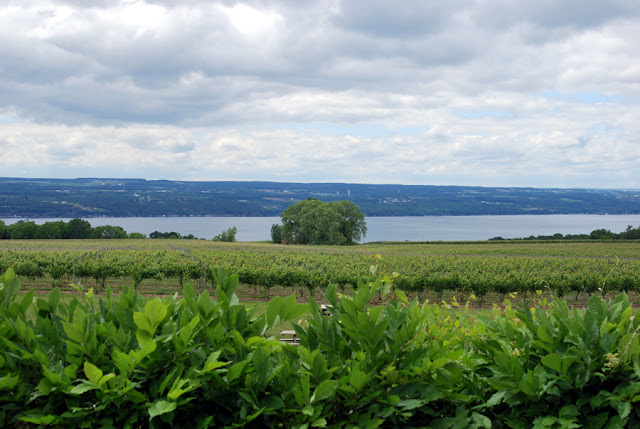 This was the third year that my wife and I took a “working vacation” for the WineMaker Magazine Annual Conference. Each year has been a different trip, three diverse locations does make up a good part of that, but together the location, themes, people and the regional juice all get  mixed up to create a complex conference blend. There is plenty to take in for all skill levels and interests during this event. The local wine tastings and experience with how the regional producers are getting along is always the most valuable for me. Conferences attendees can get that local exposure through specific sessions, pre-conference boot camps and both pre-and-post-conference tasting trips that are independently organized. The Finger Lakes provided an interesting place to study yet again.

My initial share from the conference was a fifty-three snapshot photo album, entitled ”What I Learned Out On The Road”, looking back over the three years of trips, including the most recent in conference in Ithaca, NY.

After my first visit to the region in 2011 I posted “Finger Lakes Riesling”, a summary of my experiences with the region’s Riesling up to that point. Dry Rieslings in the Finger Lakes do often have a small amount of residual sugar to balance the high acidity. You come to find that to be a non-issue in classifying the wines as dry. Ask about the IRF scale. For me the best balance of style differential AND drinkability can be found in the dry Finger Lakes Rieslings. The very best are those that present as absolutely clean and focused, no matter the range of fruits in both the aromas and nose. If the wine is spicy or tart neither of those elements will be overly aggressive. I have found the Ravines Dry Riesling in the years of 2009 through 2011 to have a particular finesse, despite being different in aroma and flavor each year. 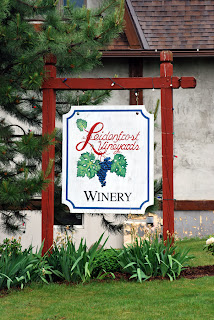 I do also love sweeter Rieslings, but without a measure of noble rot or unique character I don’t think they differentiate themselves as well as the dry style. The Leidenfrost 2008 Semi-Dry was a particular standout on the most recent trip. The petrol and minerality really had this wine singing. The late harvest and ice-wine Rieslings are generally unique and always worthy of a try even with the non-Riesling competition. Hermann J. Wiemer makes an exceptionally deep and rich Late Harvest Riesling. We end up buying more than a representative share of these types of wines when we find good ones. As a social wine, a well made and unique dessert wine can add just the right spice to a party. 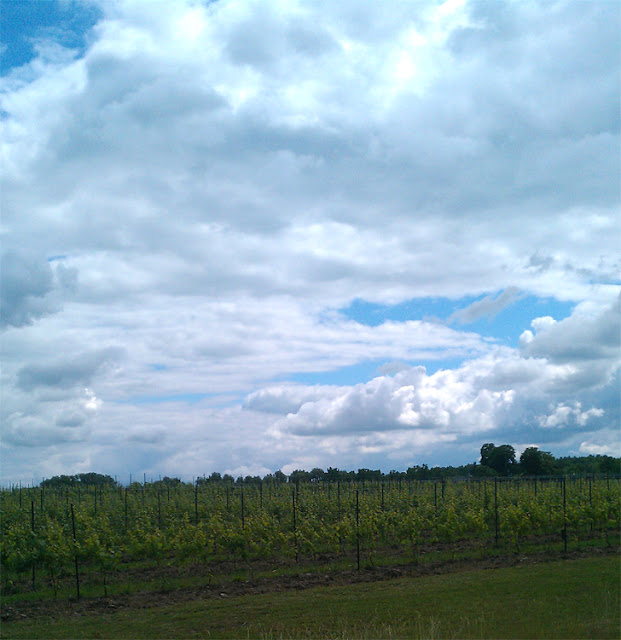 A second visit in February provided more Riesling tasting opportunities and I most certainly continued to experience the trend of variation in the recent back to back vintages. This is a trend I like because of the way it is expressed differently between producers in the same vintages where the vintages are different themselves overall. It really becomes an adventure that you have to get out and experience. After the two trips I was pretty confident by experience that Riesling and the other aromatic whites were the lead story as other wine writers had been covering it. I shared tasting notes on Rieslings from both Wagner and Sheldrake Point in posts after the second trip.

During the 2012 annual conference a panel of winemakers from the Finger Lakes region talked about their experience with Riesling. On the panel were Peter Bell of Fox Run, Sayre Fulkerson of Fulkerson Winery, Steve DiFrancesco of Glenora and Dave Breeden from Sheldrake Point. The winemakers who hosted the Riesling Roundtable spent a good deal of time talking about how Riesling works in varying conditions and expresses the vintage variation well. This was a great lead off from the first question of “What makes the Finger Lakes and ideal place to grow Riesling?” Nobody said there was a distinctive Finger Lakes Riesling profile, and each contributor shared information about the vineyard differences and locations that they were actively learning the differences of in each new year. 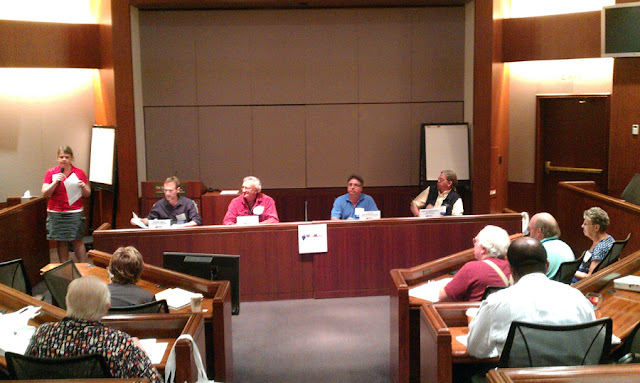 ( Sorry for the grainy picture, my good camera was on the road with friends! )

Here are some of the more interesting responses during the 75 minute Q&A:

In response to the next question, “Describe the microclimate of your vineyard or vineyards within the bigger picture of the while Finger Lakes Region and how this affects your finished wines.”, Peter Bell offered a clarification that we were talking about mesoclimates and not microclimates. At first this seemed slightly picky but after looking it up I found that the industry-wide term for the climate restricted to a vineyard or vineyards of tens or hundreds of meters is in fact a mesoclimate. A microclimate is more often used to describe a smaller area, such as a block or a row of vines. Thanks Peter! Sayre Fulkerson said “We’re still working on trying to learn and define the unique differences in the Finger Lakes” in response to the same question.

When asked what the winemakers looked for in grapes at harvest and how they measured and/or experienced the grapes to decide there was both technical and sensory oriented feedback. Dave Breeden said “What I look for at harvest is ripeness.” He also indicated he isn’t “interested in the numbers themselves”, brix, pH, TA, but the trend up to harvest. All of the winemakers talked about the physical attributes, browning seeds & seed/membrane separation, and the lack of unripe flavors they were looking for in grapes in the vineyard before picking.

“If you could give advice to a someone looking to grow Riesling grapes in the Finger Lakes, what would the most important points be?”, got a great and succinct response from Sayre Fulkerson. “Have a good spray program.” His premise is that if you don’t keep leaves on the vine you will lose your fruit and then the vine. Disease pressure due to the typical climate was discussed by all four panelists. 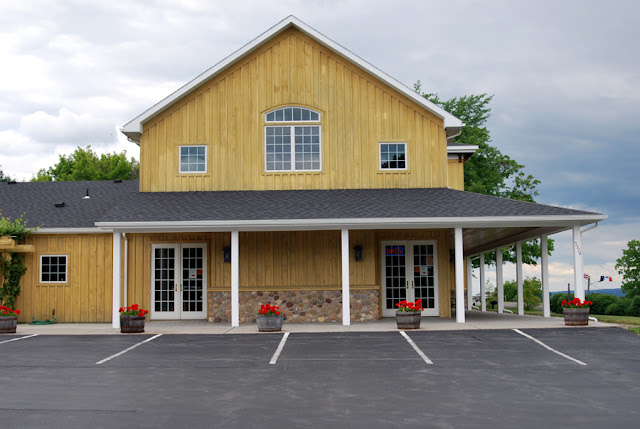 ( I stopped in a Fulkerson on my last day of tasting. Great diversity in types an styles! )

When asked about their personal style in making Riesling there was a nearly unanimous agreement that creating the illusion that you haven’t done anything in the winery was the goal of their programs. Steve DiFrancesco contrasted low acids in a hot year with high acids in a cool year, when neither must needed adjustment to make a great wine. Dave Breeden said “I don’t like to do work” to sum it up. Minimal adjustment and effort make the best Rieslings based on the feedback.

During the audience question portion I asked about how each winemaker judges the success of their dry Rieslings based on the bar and restaurant sales. Each panelist acknowledged that they continue to see increasing demand for the Dry Rieslings where they are likely going to be enjoyed with a meal . Fulkerson added that the dry style is easier to compare and more expressive of the grape which likely appeals to people who are pairing them with food. I can’t disagree with that and am pleased to see that the efforts of these producers are paying off.

Well, I hope that by sharing a bit of what I learned you also learned something you didn’t already know about Finger Lakes Riesling. Did you come to the Ithaca for the conference? If so, did you get out and try any of the local Riesling?

Staying on course with the organized conference events for a moment, I wanted to share a unique experience that I shared with several fellow winemakers and conference attendees. In 2010 I told tales of my homemade strawberry wine to quite a few conference goers. I took home a gold medal for the most recent batch of that wine during that trip, something I also did this year again which I say with a smile. Strawberry wine has been a special project for me. I’ve spent seven years trying improvements to recipes looking for the sweet spot. I haven’t found it yet. I shared the original recipe via email and my blog in 2010 and had several conversations with folks trying it the next year at the conference in Santa Barbara. 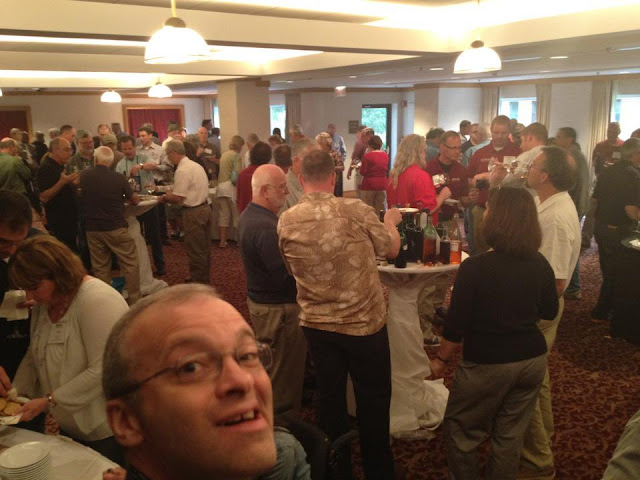 ( The strawberry winemakers are assembled and at work! Photo with permission from Tim Vandergrift. And yes that is Daniel Pambianchi photo-bombing us. I love that guy! )

This year three of that group got together again and luckily had all brought a bottle of the most recent vintage to share. So we sat down in front of our “conference family” vertical and shared what we thought. There were two styles, a sweet (1) and a dry or medium-dry (2) depending on how you want to gauge it. The medium dry versions were nearly identical in color and the intensity of the aromas and flavors. They WERE different, but in a very subtle way. The difference in the sweetness between the medium dry and third bottle sets up an unbalanced comparison, but what it did represent being different was no less exciting. The sweeter wine tasted like prickly fresh strawberry preserves. Not too sweet, and all fruit sweetness too boot. We could have sat there for hours talking just about strawberry wine! This was by far one of the most unique experiences I have had in my winemaking years.

Many thanks go out to the WineMaker Magazine staff, the Statler Hotel, vendors, sponsors and the bars, restaurants, wineries, breweries that all hosted us and our peers for the weekend. We had a great time and really enjoy getting together with our crazy winemaking family!

In part two I head back out on the road in the Finger Lakes uncovering new wines, beers, spirits and food!