Not all the major wine media outlets are predictable and boring, or at least not every month! 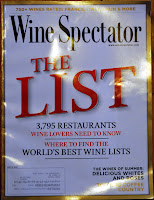 The August 31st issue of Wine Spectator was sitting on the table for a couple days before I picked it up. It is “The List” issue, containing the annual Wine Spectator restaurant awards. The close-up profiles on new Grand Award winners are generally interesting, as is some of the other story-driven content that surrounds the complete list which largely fills the remaining pages. It is a dedicated offering from the folks at Wine Spectator and I’m not trashing the restaurant content.

As I searched the magazine’s pages for something to counter balance the lengthy restaurant index I strolled passed the section entitled “Wines of Summer”. My first thought was, here we go again. Rosé and crisp whites, and mostly likely California Sauvignon Blanc. Bingo! Predictable and boring. Is that all there is to summer wine enjoyment? This was made worse by a sense of déjà vu. Didn’t they do this a year ago AND in the same issue? I dug out the August 31, 2011 issue and sure enough there was also an article on California Sauvignon Blanc within its pages. Using some kind of formula Wine Spectator? Shouldn’t we be mixing it up a little bit?

Don’t get me wrong. I have nothing against Rosé or Sauvignon Blanc. But even in my little garage-project of a blog I don’t write about the wines of summer in such a predictable and totally been-there-done-that kind of way. I feel like shepherding readers into such a tight space can’t possibly promote as much as excitement as trying on something new.

What about BBQ joints that offering solid wine pairings to go with the smoked and spicy fare? A quick web search and I found the web site for BBQ Smokehouse that actually has a page specifically on the restaurant’s pairing philosophy with more detailed pages describing pairings with reds, whites and a recipe for sangria. And guess what? They aren’t that far from Healdsburg and Sonoma wine country, and they aren’t the only place!

Austin, Texas would be another place to go looking for just this kind of mashup. Austin also has a vibrant and growing wine community! Dare to be different! They also have Tex-Mex and spicy fare to experiment with.

I’m already scheming up the pairings I am going to throw at pulled pork that I will be smoking at home for an end of summer celebration over Labor Day weekend. I suspect I will pull out a range of wines and use the table and my friends as a laboratory for find some worthy matches. All you guys out there might want to set the beer down after you are done cooking and see what a little red wine can do with your prized meats fresh off the grill!

Looking around the other media channels known for their seasonal wine articles I found a mix of both tired and more creative suggestions. Food & Wine Magazine’s web site offered some depth off of the well travelled trail. Moscofilero and Juliénas were two that jumped out for me. I couldn’t find anything intriguing after sifting through the Rosés for summer articles at Wine Enthusiast. A Decanter article from 2008 also offers a bit of adventure. Several searches at their site didn’t turn up the typical Rosé summer taste off so at least they don’t seem to play the same tune as the others.

How about Pinot Gris, Verdejo or Vermentino for whites? When going red why not try Cotes du Rhone, Rioja or something typically considered pedestrian like red blends with a little native or hybrid grape influence such as those I found in Finger Lakes recently? These suggestions are exciting alternatives with plenty of open road for you to drive them down. 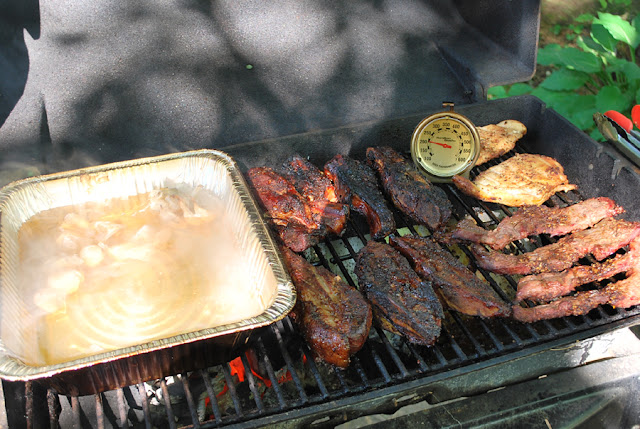 ( This makes me think of red wine, how about you? )

If you want to go beyond the traditional backyard party fare, burgers and dogs, you can open up a lot of pairing possibilities. Steak tips, sausages, ribs, grilled pizza, fish tacos, the sky’s the limit.

If I can offer any advice worth repeating regarding summer wine enjoyment though, it would be to keep the wines cool. This is a slam dunk for whites for most wine lovers, but red wines can take a chill as well. If you consider serving red at 55-60 degrees, they are going to seem quite cool on a hot day, so don’t be afraid to put them on ice!

I’d like to expect more of those wine media outlets that draw in big advertising dollars and claim to have considerable visibility within the wine community. Why be boring and predictable? Throw the formulas in the trash and get out and live. Those experiences will be worth sharing!

Jason
Posted by Jason Phelps at 8:58 AM

I would add that bloggers should also heed that advice. I have seen too many bloggers do the same, push the same, tired old wine suggestions for summer, for holidays, etc. People need to step up their game and think outside the box.

I'm still a subscriber, I will admit, but for years now, it has mostly been to monitor the mainstream push, and what high end wines the uber wealthy are buying to make one another jealous. I have to take WS with a grain of salt too...the credibility of 'The List' process took a hit when a phantom joint sneaked through.
Rich is right, members of the digital wine tribe have a real opportunity to share information and experience about wines that are not the same-old. There is a lot of tasty and AFFORDABLE wine out there...if the wine-stream media won't go there, someone else needs to.