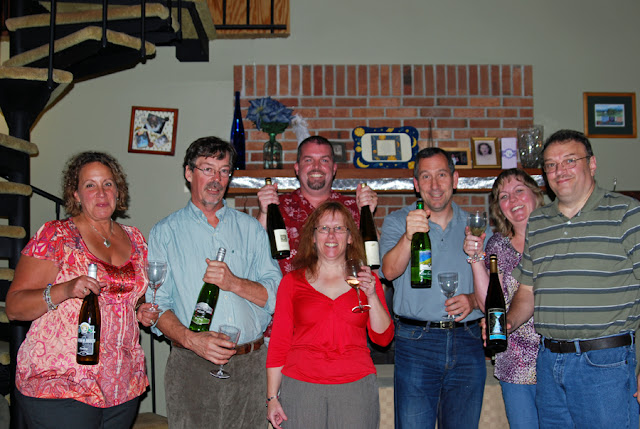 ( We all had veins full of Riesling after this tasting! )

If one could overdose on Riesling I'd bet I have made a pretty good run at it in the last year. After three trips, samples from several producers and four virtual tastings of Finger Lakes Rieslings I must have tasted at least 150 different bottlings from several dozen producers. Add to that the Rieslings that have shown up in the Empire State Cellars club shipments and I've been drinking Finger Lakes Riesling AT LEAST monthly since this time back in 2011.

All of that experience doesn't make me an expert though. My Finger Lakes Riesling vintage experience only spans 2008 to 2011, with the majority of my tastings from the 2009s and 2010s. While 2009 and 2010 were definitely different growing seasons, the limited perspective a focus on just these two these years offers is very much a place to start. I have learned a few things however.

Structural acidity is a term you might hear bandied about for some types of wines, with well made dry Rieslings being one of those types. I've had a few German Rieslings in my wine drinking life, but never enough to really understand what this term could mean. Try enough dry Rieslings from the Finger Lakes and guarantee you will get it firsthand. A robust thread of acidity is a hallmark for the best Finger Lakes Rieslings, even the sweeter styles that benefit from the balancing affect it has. These wines are great because the acidity defines, structures and holds the fruit and minerality in place as well as giving purpose to the finish. With food the acidity in many of the Finger Lakes Rieslings really allows the wines to shine. Paired with cheeses, savory dips, salads, chicken, pork as well as moderately sweet desserts, these wines can help make the sum total greater than the parts. Just last night I was enjoying the Keuka Lake Vineyards Falling Man 2009 Dry Riesling with Ocean Spray gummy fruit snacks. As silly as this sounds, you'd be surprised at how the acidity provided an excellent counter balance to the sugar, making the fruit flavors pop.

The Riesling grape is a freaking chameleon! This statement comes from tasting experiences where I came in contact with many different flavors and textures but also from listening to growers & producers from the region talk about how Riesling rides the waves of the weather better than other grapes. As I tasted through the region I came in contact with Rieslings that project lemon, orange, pineapple, apple, pear, peach, melon, apricot, plum, tropical fruits, flowers, herbs, petrol and several types of minerality. That pretty much runs the gambit for white wine aromas and flavors, and it really speaks to the diversity that is available in fruit and the different winemaking approaches being applied in the region.

These Rieslings shouldn't take crap from anyone. Riesling has a mixed perception in the wine world. So what of it? Yes, there still are many volume produced sweet Rieslings out there that are often a gateway wine for new drinkers. These wines aren't typically flawed, but aren't overly exciting either. I've had them, and I have good memories from my early consumption days when these wines were the drink of choice. Maybe these wine make up some of the light beers of the wine world. Some people graduate. But marring a whole segment of wine because of a few homely examples is ridiculous, and the Finger Lakes Rieslings prove this. The best of these wines are well made, delicious, offering plenty of nuance for wine lovers AND simple pleasure those who just drink wine casually. So next time somebody mentions Riesling make you sure you listen long enough to find out which ones they are referring too. You might be pleasantly surprised!

The most recent opportunity I had to taste Rieslings from the Finger Lakes was a virtual tasting organized to celebrate Riesling Hour, the official launch of the 2011 vintage.

My wife and I hosted a tasting at home before the Twitter event began, providing both some background education and a tasting opportunity for friends. In addition to the four sample bottles I received I also lined bottles of Riesling from France, Germany and two non-2011 bottles from the Finger Lakes. The way I saw it the style and vintage comparison would add dimension for my friends who for the most part are new to wines from the Finger Lakes region. 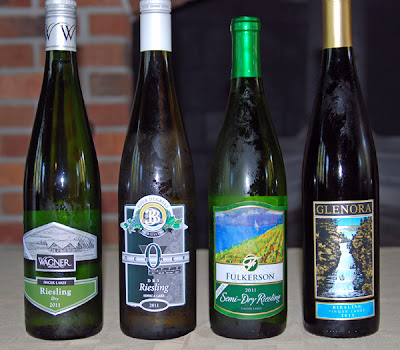 A big thank you is due the Finger Lakes Wine Alliance for the media packet, samples and for organizing the Riesling Hour tastings again this year.

I started off with a review of some of the materials from the media packet, including bits on the geography, climate, history, styles and the IRF scale, all from the slideshow that I played on the big TV. As my friends got to tasting the wines I could see the neurons firing. Approaching wine tasting educationally and with your senses peeled isn't something that non-wine aficionados really do. Consumption of any foodstuffs with a focus on sensory experience seems like a lost art in America, but like so much else there are plenty of excuses offered why people don't have the time or energy to be that engaged. That makes me sad, but it's not how I live so at the end of the day I'll keep doing my thing and sharing the possibilities with anyone who cares. My friends were getting it though and I was happy to see them taking the time to pick out aromas, flavors, textures and finally sharing what they liked and didn't.

We started with the four 2011 bottles. Comments about the range of fruits present in the wines were first to surface. The racing acidity of the Wagner selection was the next thing to spur conversation. This wine needs food to be complete in my opinion. I don't feel like the acidity was out of balance, but it was pronounced and the wine tasted best with a fruit & nut cheese spread, on crackers, one of our friend brought.

The Glenora Riesling was the sweetest of the bunch and garnered plenty of comment on the breadth of the fruit that was perceived at that level of sweetness. This wine carries along enough acidity to keep things well balanced, although as the wine warmed it trended a bit flabby. 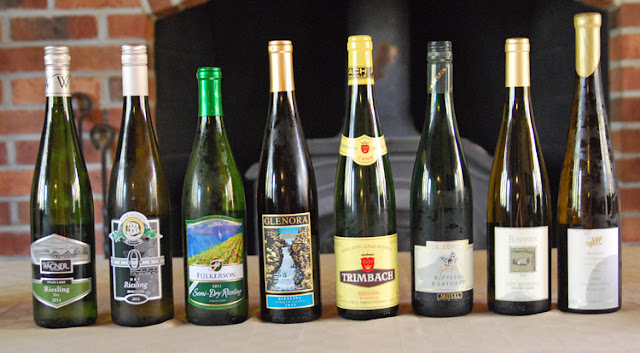 In comparison to the Trimbach the Finger Lakes Rieslings were clustered in a tight zone around it. While there were differences, nothing significant or detracting stood out. The Dr. Zenzen was oxidized from a bad screw cap so we dumped it. When we got to the Ravines 2009 Dry Riesling I prefaced the tasting with an explanation of why I liked this particular wine so much. I feel it is an example of a finesse player from the Finger Lakes region. Everything is focused, in the right place and the wine just exudes polish. The Three Brothers bottle was compared to the Ravines the most, although everyone did agree that the Ravines wine was indeed specific and distinct.

The Anthony Road wine was one I hadn't had yet but did have some qualified recommendations behind my anticipation. This is a another finesse wine. Everything about it is focused and clean. It isn't as sweet as I would have expected from the reported residual sugar (which I can't find in my notes), but that didn't take anything away from its enjoyment. There wasn't really any comparison to be had here, more of a broadening of one's understanding of the range of Rieslings produced in the Finger Lakes region. I finished the night sipping on this little gem!

At the end of the tasting the Fulkerson & Three Brothers wines were the winners amongst the 2011 bottles, with the decision between the two was split. Our friends cheerfully thanked us for the education and the opportunity to taste wines new to them. Those thanks weren't one sided. I feel like I learned a few things from putting on my "teacher" hat in preparation for the tasting. Observing the others digging into the different wines was also instructive, proving to me that I should continue to host these types of tastings.

Disclosure of Material Connection: I received one or more of the products or services mentioned above for free in the hope that I would mention it on my blog. Regardless, I only recommend products or services I use personally and believe will be good for my readers. I am disclosing this in accordance with the Federal Trade Commission’s 16 CFR, Part 255: “Guides Concerning the Use of Endorsements and Testimonials in Advertising.”
Posted by Jason Phelps at 8:29 AM

Jason, so glad to hear you and your tasting crew enjoyed the Fulkerson 2011 Semi-Dry Riesling. Thanks for writing this article about Finger Lakes Rieslings. Cheers! Brittany, Fulkerson Winery