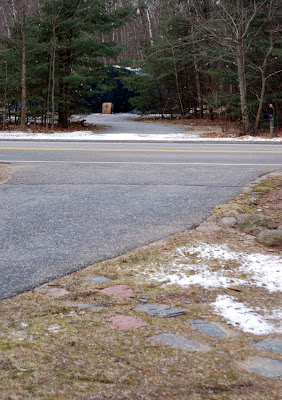 It’s funny how things work out. A nasty cold creeps up on you the week before Christmas and doesn’t let up entirely until after the holiday, a date yet to come... Your wife ends up feeling the effects of that cold over the holiday weekend itself. My cold killed some of my late week motivation for Christmas food & drink that I had hoped to share here at Ancient Fire. Such is life. My steady recovery and Margot chilling quietly on the couch this weekend gave me time to spend time in the kitchen on Christmas having fun.

I made the Figgy Pudding and Christmas Cake prior to leaving to visit family for the first part of the weekend, but just didn’t get to sharing them. I enjoyed the experience making these two recipes for the first time. There was plenty to be learned about where they come from and what they mean to us at Christmas time. I’ve got the leftovers soaking in rum or cognac right now. New Year Day treats! Some lore, recipes (at the bottom) and photos are below.

Figgy pudding comes from 16th century England and is largely considered a version of Christmas Pudding. The diversity of its ingredients and cooking methods speak to it being a very local, or house to house specialty. The Christmas connection is from the carol “We Wish You A Merry Christmas” and the lines "Now bring us some figgy pudding" and “we won’t go until we get some” indicating that figgy pudding might have been given to carolers at Christmastime. In the larger realm of Christmas Pudding you find even more diversity, gift giving, prizes baked into them and many traditions in vast locales where it was made. Steaming the pudding is a very popular method, although not the clear majority winner amongst methods. 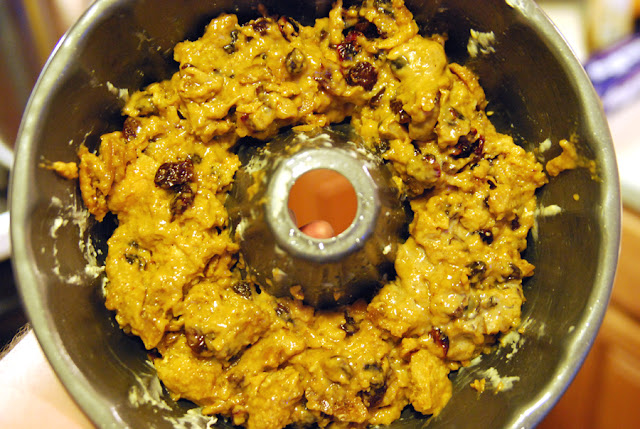 I also made a Christmas Cake using figs and a similar spice complement to the figgy pudding. Both cakes are dense and very flavorful, something a bit of citrus, sugar syrup or spirits can add life to. Why not all three? Like a cocktail in your dessert! House style Christmas cakes are as old as baking and Christmas, so everyone has their own type of recipe they like. I trend toward the big flavors and baking spices this time of year, but that isn’t certainly the only route. Light colored cakes with whispy frosting and mint or vanilla flavors certainly bring visions of the winter-time Christmases of New England where I live. 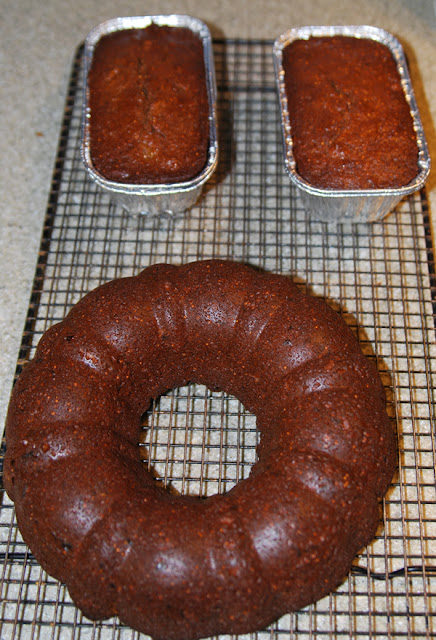 We started Christmas Day with Squash Laced Cinnamon Buns from page 220 of the November 2011 Cooking Light issue. I got up early to make the dough, went back to bed, and then rose to cook them for the obligatory watching of A Christmas Story. We’ve watched this movie in Jamaica on Christmas, and it never fails to make us laugh about Christmases past. Back to the buns. These were my finest bread baking experience ever. Repeating it will be an epic struggle with luck I fear. Baking good bread takes a lot of time, and even with that success is not assured.

The Starbucks hot cocoa mixes that I snagged last month made mochas that wound up the day pretty good. We’ve enjoyed them again several times since. Merry Christmas indeed! 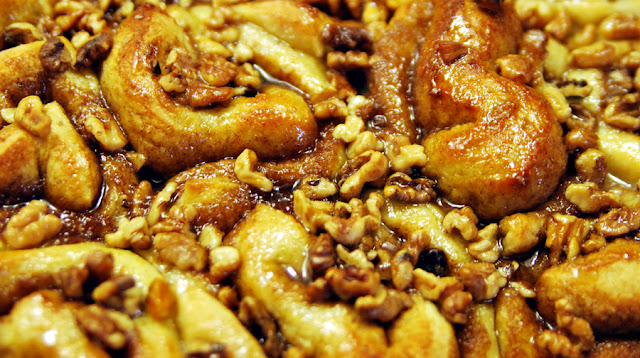 I also made one of my favorites, mulled wine, on Christmas Day. This turned out to be the right treat for the bands of flurries and snow showers we had all day. It was beautiful at times and I hope I caught some of it in photos. We took walks with Pete (our dog) several times to enjoy the beautiful day. 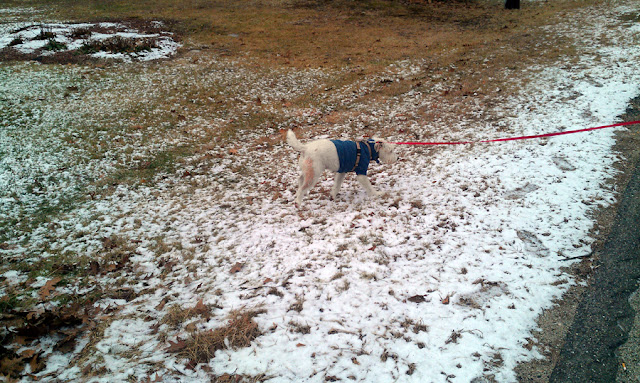 The recipe for the wine is a simple one, but mulled wine is special that way. You can make a little or a lot, but you have to make sure you drink what you make when it’s warm and first ready to drink. Letting it cook for too long isn’t a recipe for success. Too much acid, citrus pith, cooked flavors, etc. Some batches do better than others, but avoid it if you can. 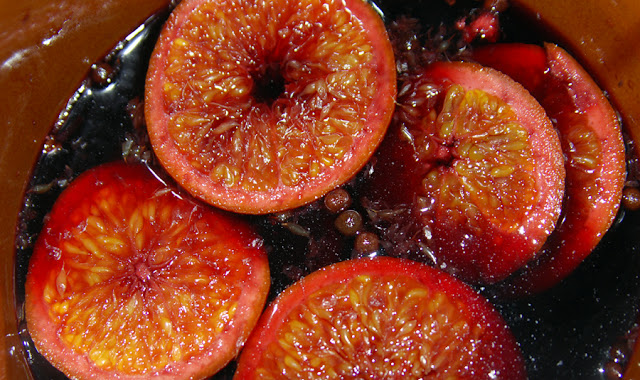 Heat a crock pot on high. Add spices and orange slices to the bottom of the cooker. Allow aromatics to build. Pour over the wine and add the sugar. Mix until the sugar is dissolved and the wine is hot. Do not
allow to get to a simmer or boil. Ladle into punch cups or mugs. Multiply the recipe as needed.

While I was making ginger syrup earlier in the week I ended up with the “spent” ginger in the fridge. I immediately thought of candied fruits, and from there candied ginger and orange slices were made. I wasn’t dreaming of sugar plums, I made them! 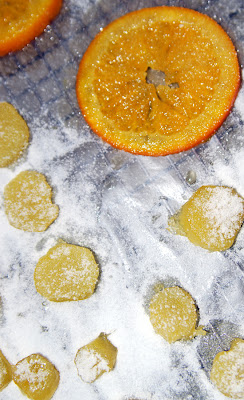 Other than the mulled wine I drank a few additional beverages over the weekend, including a bottle of Rose Regale with family on Friday and wines from Virginia (Barren Ridge and Tarara) on Saturday over Chinese food and snacks. After Christmas I went back to the open wines from the holiday open house and enjoyed the white blends from the Finger Lakes (Lamoreaux Landing and Hunt Country Vineyards) that we opened at that event.

I received a great gift in the form of a bottle of Jefferson’s Straight Rye Whiskey. I haven’t cracked it open yet, but that time is not far off. I had bottle of their 10 year old Bourbon open earlier in the week and I can’t say I would let it stray too far if it was mine…

I can’t complain about how my holiday weekend worked out, I had lots of fun. I would have had different fun perhaps without the cold, but more fun? That might not be a slam dunk. With New Years coming Margot and I are looking forward to going out and having a bit of a party before we ring in a new year and have to get back to the rat race!

Optional: 1/3 cup brandy, cognac or rum, to flame the pudding

You will need a 8+ cup Bundt pan and a stock pot large enough to contain it and water for steaming.

Bring the figs and water to a boil in a small saucepan. Lower the heat and simmer until the water is almost gone.
Add the rum, cognac raisins and bring the pan back to a boil.

To flambé the figs:
Remove the pan from the heat, make sure it’s in an open space, have a pot cover at hand and,
standing back, set the liquid aflame. Let the flames burn for 2 minutes, then extinguish them by closing
the pan with the pot cover. For a milder taste, burn the rum and brandy until the flames die out on their
own. Set the pan aside uncovered.

In a large mixing bowl beat the eggs and brown sugar together with a whisk. Stir in the bread cubes, the melted butter and the fig mixture.

Add the dry ingredients and mix to make a thick batter. A final mix with the cherries and cranberries and you are ready to steam it!

Spray the Bundt pan with cooking spray, then butter it liberally. Give the center a good coating.

Spread the batter into the pan and seal the pan tightly with aluminum foil. Lower the pan into the
stock pot and fill the pot with enough hot water to come one-half to two-thirds of the way up the sides
of the pan. Bring the water to a boil. Cover the pan and lower the heat so that the water simmer gently.
Steam for 1-2 hours. Add water if necessary.

The finished pudding will have lots of steam trapped inside the pan. Caution should be exercised opening the pan.

When a knife emerges clean from the pudding it is finished cooking.

Removing the Bundt pan from the pot can be tricky. Where the oven mitts and use tongs if you can. Dump out onto a rack and allow to cool a bit before serving.

Use the optional spirits to douse the cake for a tableside flambé before serving. Be careful, this can go wrong too easily. Be prepared with a cover, water and quick wits.

You can serve it with whipped cream, marshmallow fluff, ice cream or just eat it as is!

Preheat the oven to 325 and liberally grease a Bundt (tube style) pan.

I liked the preparation of the figs for the Figgy Pudding, so I am going to repeat that here with the figs & water, then adding the rum over a light simmer for 5-10 minutes. No flambé to finish this time.

In a work bowl whisk together the flour, baking powder, baking soda, spices and salt. Set aside.

In a large bowl cream the butter with a hand mixer. Add the eggs and molasses and mix well.

Slowly add the dry ingredients to the wet and blend until smooth.

Fold in the walnuts, if using.

Spread the batter evenly in the pan. Bake for 50-60 minutes. A toothpick or skewer into the center should emerge clean to test if it is done.

Cool on a wire rack.

The recipe I riffed off here of has the setup for a glaze or sauce. I would have opted for whipped cream, but ran out of steam before I got there.

Check out the Dorie Greenspan inspired post that guided me at http://www.mygourmetconnection.com/recipes/baking-desserts/other-desserts/figgy-pudding-cake.php

I have never had figgy pudding, but from the ingredient list I think I would love it. Did you flame yours?

I hadn't ever had it either. It is kind of like fresh fruitcake flavored bread pudding. Warm the leftovers up and it's on!

The cakes look fab! Sorry you two had a sick holiday, that generally happens to me :( It sucks!