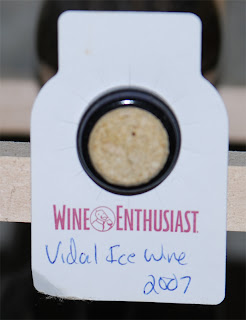 Before we get into this, I must define old wine as it pertains to my homemade wines. My first batch of wine went into the bottle in 2004. For the first 2-3 years thereafter most of my wine was consumed by year’s end and the few bottles that were given away were returned to me, likewise empty. As my annual production increased wine got to see shelf time for longer, I started giving split batches as gifts and friends would scurry a bottle or two away as a novelty. That last part is despite telling them not to on most occasions, but we will revisit that later. So when I say an old wine, it will be magical if it is 3-4 years old when I uncover it. I should be able to try some 5 and 6 year old homemade wines in the next couple of years.

Over the 2011 holidays I spent several days in Connecticut with my parents. My parents are very vocal supporters of my wines, as well as the beers, ciders, meads and other projects, so they’ve been the recipients of them on many occasions. In 2007 my brother and I went in together on a batch of Vidal-based dessert wine made to be reminiscent of Ice Wine, although not produced in any such way. We gave the wine to our mother as a birthday gift that year. It was, and still is one of the finest batches of wine I’ve ever made. Mom was elated and has enjoyed it many times since. I knew she had several bottles left, and I also knew I could be gambling not saying anything about drinking them yet. I hadn’t considered the storage conditions at play, after all the wine was a gift and how it was used was out of my hands.

Mom expressed an interest in pouring the last two bottles at an upcoming dinner party. I took a look at one of the bottles and it clearly had experienced a protein degradation. This is a flaw of some older white wines and is likely when you see white fluffy stuff floating in the wine. In the first few years I made wine I focused on learning how to do it better, but there is a lot to learn and by 2007 I had yet to use cold stabilization and long clearing regimens to ensure my wines were clear and would stay that way. This is why I often told friends to open the wine I gave them as gifts soon, and why I purposely opened and shared it at many parties we attended. These wines were not fined and prepared for any long term life!

I was immediately suspect that Mom’s Ice Wine would be drinkable. I suggested she open one right before serving it and have a backup wine ready. She opted to open one right then and there, my mother rarely drank before I started making the stuff by the way, which of course peaked my interest. Ignoring the floating particles, the wine was still clear, had retained the caramel/orange hued color and smelled fantastic, if not a bit hot. In the mouth the wine reminded me of Madeira wine. It had flavors of nuts, dried fruits, it was oxidative and a bit reductive. The dried fruits I expected and found in the nose had masked the other elements, but they were easily found with each sip. The final vote was that the wine was quite drinkable, but would certainly not be best described based on its original making.

This was a very curious outcome for me because I had never experienced it in older wines of mine I had come across. Earlier in 2011 friends of our found a bottle of a 2006 Pinot Gris I had forgotten I had made. I don’t know how they stored it, but it was oxidized, brown and totally undrinkable. Younger homemade wines that have passed their peak have typically been completely dried out, slightly tan or brown and not pleasant to drink.

The room my mother had stored the wine in sees a lot of sunlight and during the warmer months gets quite warm. Effectively my mother had raised the wines up to the top of the hothouse and let them cook a bit. My mother was making Madeira in her office without even knowing it! Well done, is all I could say. It was remarkable to drink it and consider how unlikely it would be for what I was drinking to come from where it did.

I have one bottle of this wine left that has been stored in different conditions. I’m hesitant to crack it open without an occasion to enjoy it, because if it is has survived it will undoubtedly be one of the best homemade wine tasting experiences I will ever had.

In the last several years I have made enough wine that some of it will get to 5 or more years old allowing I and others to enjoy many more peak wines and continue to come across interesting twists with how some of the wines age. It is exciting to think that with age wines of mine that have been well cared for could reach heights I’ve never imagined.

p.s. Happy New Year! I shared some project ideas for the New Year at the WineMaker Magazine Blog this week.
Posted by Jason Phelps at 9:19 AM

Fascinating. My palate understood that Madeira was different, but didn't know the temperature change in the aging was responsible. Happy 12 2 U GREG