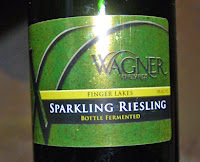 I opened several different sparkling wines over the holidays. Knowing my guests would be in the mood for something celebratory, I used the bottles in that very stereotypical way. I'll raise a glass of bubbly anytime, but not everyone has evolved to that sensibility.

One of the bottles we opened was the Wagner 2010 Sparkling Riesling, part of an order I placed with Wagner Vineyards during my last visit in 2011. I had only tasted it once, but being a great value AND something a little different in the sparkling category I knew the right moment to share it would come along soon enough.

It pours the color of dry straw with abundant carbonation. It is very gently sweet and I believe the restrained sweetness is a huge asset. It is unmistakably Riesling from the first fruity whiffs coming off the glass. Citrus is the driver, and felt both lemon and orange were present.  Some ripe peach comes through in the mouth and overall it does have a subtle fruit salad characters to it. The whole package is crisp and clean and the gentle sweetness fades through a lengthy, tart finish.

Margot, my mother and I finished this bottle off with cheeses and snacks on Christmas Day. The balance of fruit and sweetness was fitting for a lazy day, actually the first day of that holiday weekend where we neither had to go anywhere nor host a house full of people!

If there is one thing I've learned from my wine-making activities, it's patience.

I've had mixed feelings about this wine since it went into the bottle in 2011. It was my first 100% grape wine using the full process of cold soaking, crushing, pressing, malo-lactic fermentation and extended bulk aging. The press cake from the first half of the batch is in the pic to the left. Up until I inoculated it with the malo-lactic culture the wine had been trending much like many others I had made. I have always felt like something took a turn after that, and not only because of this batch of wine. I made Cabernet, Syrah and a couple blends at the same time, with the same method and the same grape source. The Cabernet fermented fine but then continued to bubble into a stinky mess that ended up getting dumped. The Syrah and Cab/Syrah blend turned out OK, but the Cab/Syrah blend and Malbec always seemed a little acetic (vinegary) to me. The Syrah was the best of the bunch and I think we've succeeded in drink all of it already! I believed I had come in contact with some type of spoilage bacteria and when an unrelated new batch of wine went south I proceeded to replace all my plastic and hard-to-clean equipment in hopes of getting rid of the bugs.

I was pretty happy when I opened a bottle of the Malbec recently and found that the acetic component had faded considerably and a measure of earthiness was now detectable. It still has some mild flaws, but I'm alright with that. The fruit and non-fruit facets of the wine are balanced fairly well, and the additional body in this wine when compared to some of my juice based wines is nice to be able to identify. It is unmistakablely a Malbec, but I don't have enough experience with Chilean Malbecs to compare it to those wines from the region where the grapes came from. I didn't immediately pick up any other funkiness so I am hoping that the time I allowed this wine to sit around undisturbed has been beneficial. I hadn't been making enough red wine up until 2010 to really know what a year or two (and more) of aging would do to homemade wine firsthand. Finally being able to have that experience does bring a reward in knowledge and considerations for future projects.