I'm going all wine this week. I'll circle back on a few other items folks who were at my house might (or might not) remember. I'm without power as I write this, but with the generator humming away I can both work AND share my beverage adventures in the wonderful ambiance that is New England weather!

Before Christmas Lori from Trione reached out to me to ask if I was familiar with the wines from Trione Winery, a relatively new winery (7 yrs) from a family of long-time grape growers and farmers in Sonoma County, CA. I replied that I was not and a few weeks later I got a TastingRoom.com sampler with six different wines to sample. Thank you Lori! 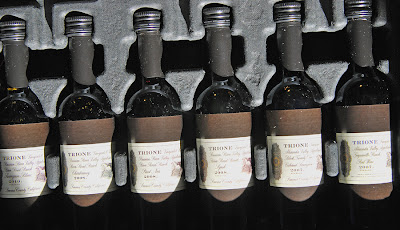 The sampler included whites and reds which were organized in the following order:
My favorite red was the "Red Wine", a Meritage/Bourdeaux style blend that is put together nicely. It was rich and full and plenty earthy. While a very tart wine, the long finish was slightly sweet. The fruits trended from bright red to purple/black and the nose was slightly herbal.

Both the Chardonnay and Pinot Noir were notable for the lighter style wines. The Chard is oaked, but does have a nicely balanced grilled fruit palate. The Pinot is tart, abundantly fruity with a smooth finish.

All the wines were well made, and any of them would be expected to show well in more recent vintages, something needed by the taster to help sharpen focus and understand of the house style.

The spiced wine I made on a whim in the Fall has turned out to be more versatile and interesting than we thought. My initial review didn't have say a whole lot, and certainly nothing that would get a reader to jump at trying it unless no other options existed. The tartness in one of the bottles I sampled had me worried that I was going to need to doctor this wine for service. Well, that is sort of the point to how it came to be in the first place, so why did I mention this again?

Because a second and third bottle were sweet, spicy and exactly what I was hoping for. But that doesn't mean doing something even more "non-traditional" with this wine shouldn't be attempted.

But "non-traditional" where and to whom? Maybe to some people in parts of the United States, but what I'm about to do isn't non-traditional in many places around the world (Spain for example) and since it is also so good I highly recommend it! Let's drink us some red wine and cola!

I first saw the concoction on an episode of No Reservations when Anthony Bourdain was tracing his family roots to Uruguay.

Ancient Fire Spiced Wine Soda
Spiced wine on tap is the first thing that comes to mind. It really is delicious. I wouldn't do this with expensive wines, unless they had been open a couple days already, and wines that aren't balanced on their own might not  blend well with the Cola.

Disclosure of Material Connection: I received one or more of the products or services mentioned above for free in the hope that I would mention it on my blog. Regardless, I only recommend products or services I use personally and believe will be good for my readers. I am disclosing this in accordance with the Federal Trade Commission’s 16 CFR, Part 255: “Guides Concerning the Use of Endorsements and Testimonials in Advertising.”
Posted by Jason Phelps at 9:48 AM