From the last post you can get a feel for the mission we were on to experience some of the distinctive beverage offerings found in Montreal. That mission is continued here.

Before I left for the trip I was reading a recent issue of Imbibe magazine that did a lineup of coffee stouts including the Imperial version from Dieu Du Ciel! based in Montreal. I planned to seek it out, try it and bring some home. Oddly I had forgotten when I organized the pub tour that this brewer does have a downtown location, as well as retail distribution, but had chosen locations closer to the hotel so we missed a visit. We did end up finding the beer at the IGA.

We also picked up the Rosee d’Hibiscus at the same time and sampled both at the hotel and brought the remainder home for future tastings.

Smells like a Starbucks mocha!
Tastes like high cacao (85%+) dark chocolate
Strong smoke and coffee tastes
Triple chocolate cake with espresso dark chocolate sauce
Small sharp bubbles, but not overpowering
Will enjoy the remaining ones of these for sure! 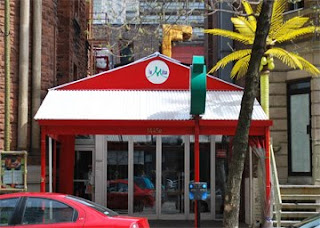 Le Milsa does not disappoint in the above definition. With ten meat offerings including, chicken, chicken sausage, pork, lamb, filet mignon, rib roast, sirloin, prime rib, strip steak, and turkey wrapped in bacon, you can be sure your cholesterol and salt numbers are going to go in the wrong direction! Served along with salad, bread, rice, sweet potato and spicy mushrooms many flavor combinations are possible.

All four of us, Margot, Gerry, Eloy and I, went with the standard menu and paired our meal with the following wines.

The strategy I had for the wine was to have two different reds. For the first I looked for a subtle and focused wine to complement the richness of the grilled meats for which the Malbec did performed nicely. For the other I wanted a wine with more fruit and a bit of spice to counter balance the seasonings and take the flavors in another direction. The original choice was a California Zinfandel, which was not available, so the Shiraz was selected and played the part well. All of us agreed that both wines paired with the different meats differently and that all pairings were enjoyable.

One of the other experiences I was hoping for at Le Milsa was to try cachaca or a drink made from it. Without fail the Brazilian national drink, Caipirinha, similar to a traditional white rum daiquiri from the Carribean was on the menu. This drink contains cachaca, muddled lime and sugar served over ice. Somewhat sweet with good lime flavors, this drink was very pleasing and made for a great post-meal digestif. 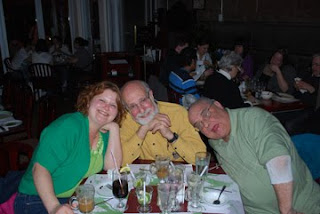 We weren’t quite finished. With dessert, which was a choice of ice cream or grilled pineapple, we all also tried a strong coffee drink that included Gran Marnier and Crème de Cacao. Though I was originally worried that the coffee and pineapple flavors would not pair well, Margot was surprised by the perfect match due to the cinnamon coating on the pineapple. The flavors of the coffee were fantastic and its ability to promote laughter all around propelled us out on to the streets of Montreal for a brisk walk home.

Now that is making memories!

I did try a couple of other beers during the trip that are also worth mentioning.

Unibroue Ephemere - a tribtue to the green apple.

The green apple aroma was present right away and was unmistakable. It faded fast however, something I do believe to be a flaw. As for flavors I would say that my taste buds were still working, but were not picking up the fruit. It tasted like a typical light unfiltered ale without any other tangible flavors or aromas. This was not terribly memorable, but Unibroue makes many other styles I do like and will return to frequently.

We stopped at the Vermont Pub & Brewery in Burlington Vermont for lunch on the way home. I tried two of their house brewed beers that had unique descriptions on the menu.

This is big beer competition winner for them
Brewed with 500 lbs of local raspberries
Strong beer – no ABV determined
Sour mashed and oak aged
The fruit is unmistakable in the nose and flavors
Good on its own and would be good with fruit pie
No real pairing attempt was made, just enjoyed it solo

It was a drag coming home from such a whirlwind tour, but there was little choice. We have already started scheming up where we will go the next time.