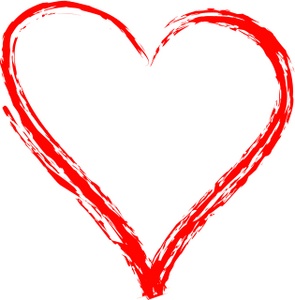 Love it or leave it, it’s Valentine’s Day. I can’t be down on the day, and that’s because I have my own history from which I can expect to have a wonderful day enjoying the love I share with Margot. I am fortunate enough for this and knowing that not everyone can say this today is troubling and not lost on me. But, press on I must.

I’ve played around with many food & beverage pairings in my blog and have at least strayed into ponderings on pairings with music, people, occasions and locations. A pairing of hearts is what’s on my mind today so that’s the pairing I planned and executed.

Margot and I met in 1995. Less than one year later, the week inclusive of Valentine’s Day, I asked Margot to marry me. On the first day of summer 1997, we were married in a beautiful garden maintained by my great-uncle Warren where he lived with his sister, and my late grandmother, Irene. Five generations of my family were assembled where we publicly declared our undying love. Sweet! 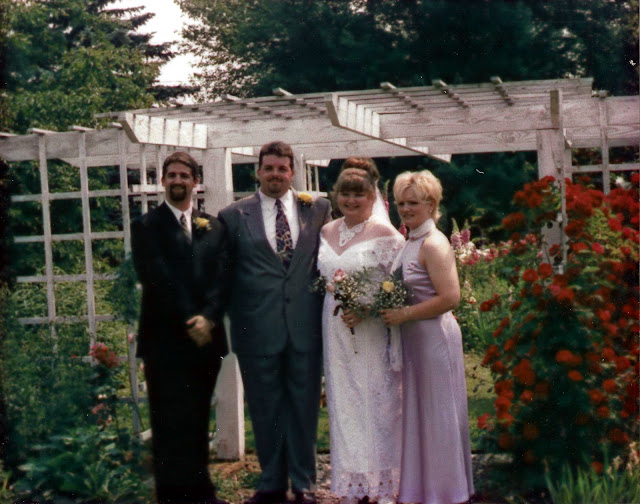 Margot and I enjoyed the party atmosphere at Plymouth State College where we met, and our tastes precariously teetered on all sorts of edges. Along the way our drinking tastes have evolved and branched out from cheap swill beer to craft beers, small-batch wines, artisanal spirits and all drinks more interesting. Riesling was the first style of wine we both seized the same joy from, and we have enjoyed many more together since.

That’s the setup. 1995. Riesling. I found a bottle of 1995 JJ Prum Auslese Riesling from the Mosel available at Federal Wine & Spirits in Boston. A quick search of reviews convinced me the risk for the bottle was as low as it could be for its 16 or so years. The label was a bit discolored and roughed up, but otherwise the bottle didn’t offer any concerns. 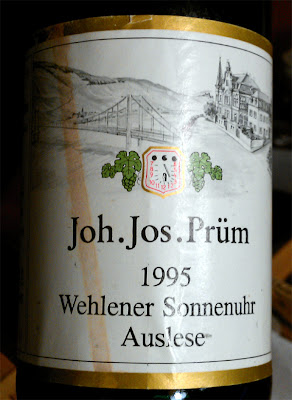 Under the cap the bottle was a bit musty but the cork was solid, pliable and emerged without issue. One small piece of cork landed in the bottle. Not bad.

The color is a big, deep gold and sparkles in the light. The nose on the wine is distinctive, full of apricots, other stone fruits, honey, candied citrus with a spectrum of minerality and volatile aromas that border on chemical. On the palate the wine is tongue coating, sweet, with all of the aromatics represented. The acidity is still moderate, producing a tartness in the finish that keep things pretty well balanced. The minerality and chemical tastes are definitely represented in the reductive elements. The apricots are dried and the other fruits very ripely aged. This wine is drinking as well as I could have ever imagined. 1995 was indeed a very good year.