A new weekly column. The first one posted way beyond the initial self-imposed deadline. Who knows that the hell this means!

The folks at Zonin shared several selections of their collection with me and I recently took a white and a red for a test drive. On its own the red paired best with the simple pasta & sauce I was eating, but overall both wines performed acceptably the night I opened them. 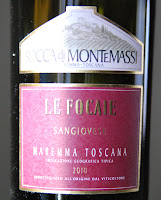 The Rocca di MonteMassi Le Focaie Maremma Toscana 2012 is a bright, assertively tart red wine that is would be best when paired with light Italian fare or even a cheese plate. The acidity is cleansing keeping the wine focused and sharp. With cheese the wine expressed savory herbal notes that were quite pleasing.

The Principi di Butera Insolia Sicilia 2011 is a straightforward dry, white wine with a slight salinity to it. This wine was not a match for red sauce, trending better with cheese. The salinity might make this a good match with shellfish, which I did not try.

I've haven't met (yet) the people at Peconic Bay Winery and Empire State Cellars, but I do know that they are doing a fantastic job representing and promoting wines made in New York State. During a chat with James Silver, General Manager at Peconic Bay Winery, he asked if I was interested in cider. Those were words I have heard before, and thankfully I have always said yes! As a result I was lucky enough try the two styles of Long Island hard cider Peconic Bay Winery is currently producing.  Cider doesn't resonate with everyone and one of the revelations I have had about what makes a cider more likely to please is that the clarity matters. In this case clarity is both visual and on the palate; a finesse if you will.

Both of the Peconic Bay ciders have that finesse. The True Companion was the first one I tried and it immediately reminded of another cider made in a similar style that  I've really enjoyed, The Saint by Crispin Cider. True Companion is made with a five apple blend and also has orange zest, ginger and molasses added. The cider pours an amber color and comes off spicy and sweet making for a killer drink on its own. Paired with cheese this cider owned the tasting. Like The Saint from Crispin, this cider is fruity, spicy, a bit yeasty with a sweet finish. This complexity when it is well polished makes for exceptional drinking.

True Believer is a drier cider made with the same apple blend as True Companion minus the spice/sugar additions. This cider is lighter in color with a much more apple focused nose. True Believer's asset is how smooth it is. Tart apple is all over the place, there is a stripe of acidity, but the finish is just a hint sweet and round. This cider tastes more like an heirloom or cider-type apple drink more than the dessert apple blend it is made from might suggest. A very nice surprise.

Both ciders would be good on their own, with cheeses & snacks or with white meat-based main dishes.