So, I finally got this new weekly column thing calibrated. It's amazing what a vacation and  a holiday can do to a screw up a schedule! This new column is where I will feature notable beverages that I've enjoyed within the last couple of weeks.

During a week-long trip to the Orlando, Florida area I sampled a number of Florida beers and found several that I would highly recommend. I sampled in a number of settings, on draft at the Epcot Food & Wine Festival and Big River Grille, then from bottles back at my vacation place and at the Bahama Breeze.
In general Florida brewers are embracing lighter styles (lager, pilsner, wheat beers) but based on the climate and cuisine, I see this working well. I was able to taste a range of beers, including several IPAs and brown beers in addition to Pilsner, Lager and Wheat beers. 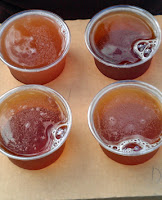 At the Epcot Food & Wine Festival the Florida Beer Company's Key West Southernmost Wheat was my favorite amongst it, the Florida Lager and Devil's Triangle IPA also from the same producer. Light, with a slightly creamy texture, the crisp finish and light body of this beer would make it versatile with a range of local foods. The Devil's Triangle IPA was good, but the bitterness felt a little forced. I'll share more on the Epcot Food & Wine Festival in a separate post. 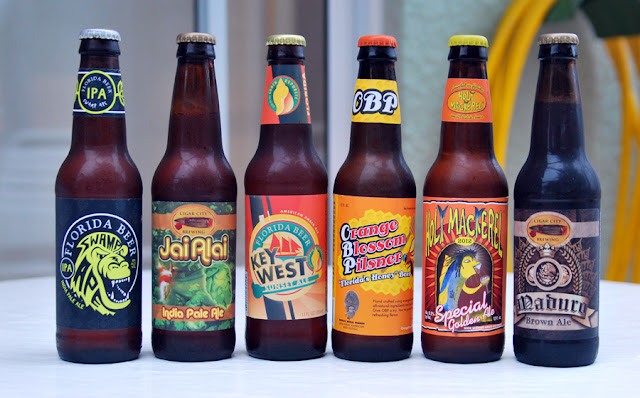 All the beers were well made and plenty drinkable. The Sunset Lager is pretty straightforward and didn't garner much comment. The Orange Blossom Pilsner, one of two of the beers brewed under contract in SC, was nice blend of a wit style beer with honey. It smelled and tasted like oranges with some honey notes in the finish. The Holy Mackerel Golden Ale was an exceptional drinker. A Belgian beer all the way, it was a bit yeasty, spicy and fruity. Lively and super drinkable. The Swamp Ape was my favorite. A sweeter IPA, similar to DFH 90 I'd reckon, it was smooth, hoppy and so delicious! Both of the Cigar City beers were very well polished, but the Maduro Brown Ale won the face off. I had this beer before the two other brown beers I enjoyed next, and it was the best non-pale ale so far. Rich, nutty and full on the palate. It isn't a huge beer so you could drink a few to make you real happy!

The Big River Grille & Brewpub on Disney's Boardwalk is a brewpub/restaurant owned by the same group that operates Rock Bottom and Gordon Biersch. Their holiday beers were on tap and we checked out both the Winter Brown Ale and Winter's Nip Holiday Bock after a relaxing walk of the boardwalk and adjacent resorts. The Winter's Nip Bock is a fantastic, moderately malty brown beer with hints of spice and banana in the nose. Definitely a nice warmer for those cool Florida winter days. I could drink way too many of these!

At the Bahama Breeze I paired Orlando Brewing's Organic Blonde Ale with the Mahi tacos for lunch. Definitely a great combination. The beer on its own is flavorful, dry with hints of citrus in the finish. Perfect with lighter fare.

What wine to pair with Thanksgiving is always a sporting topic for the wine media to attend to this time each year. I've done it in several recent rotations (2008, 2010, 2011), but opted not to in 2012. There is no "right" or "perfect" answer to "what wines do I pair with Thanksgiving dinner?" and exactly who graces your table and what kind of mood everyone is in is much more of a concern than the wine. But, this year what I did select to have on the table for my family meal was quite successful and as a result worth sharing.

The review for the Clos de la Roilette, Cuvée Tardive 2011Fleurie from Jancis Robinson made the rounds late in October and I was curious. With so much love showered on this wine, "I'm in love" and "Yum, yum, yum" as just two examples, I figured I had little if anything to lose on a couple bottles. I found them for around $35 with shipping from Flat Iron Wines in New York, and got ahead of the season and had my wine in hand two weeks before the holiday.  Flat Iron is only stocking magnums of the 2011 right now, but after tasting this wine I can't see why that would be a losing proposition either! 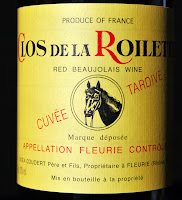 Beaujolais for Thanksgiving, how stereotypical for me! Yes, it did work out that way. I felt this wine would make for a pleasant drinking experience for Margot and I in that setting. I don't always expect those I share wine with to say anything at all about a particular bottle so bringing something for me to pay attention to makes plenty of sense. This wine is precisely dry and focused. The ripe fruit aromas and flavors don't feel forced and come off full, yet fresh. There is a particular minerality to this wine, and I also felt a bit of spice or herb in the finish was not standard/everyday Beaujolais. It was easy drinking, smooth and had a gentle tannic bite in the finish.

With the onslaught of holiday table flavors this wine did admirably, pairing best with a squash and mushroom tart that also had melted cheese on top. The flavor combination in that dish matched the fruit/earth combo in the wine better than everything else. Margot loved this wine and I'd recommend it highly to others. Don't buy all the magnums from Flat Iron before I get to order some though!

For dessert, which was apple or squash pie of course, I paired the Hermann J. Wiemer Select Late Harvest Riesling dessert wine. We've had this wine several times and the massive flavors of sweet fruits and tart citrus go great with dessert. All the glasses were promptly emptied.

Jason
Posted by Jason Phelps at 7:39 AM