The producers of the Finger Lakes are sharing their wines through a series of virtual tastings again this year including several in the month of May which is Finger Lakes Wine Month. If you are curious about the wines from the region these tastings go a long way to help you understand what is possible. 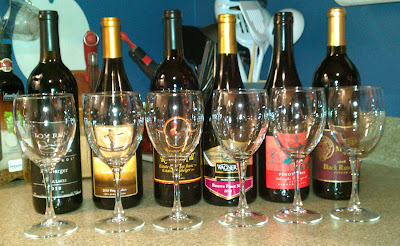 In the past I have participated in the Riesling and White Wine tastings so for this most recent series I selected reds. The sample kit included the following wines:
Prior to the 8PM virtual tasting I opened each of the bottles and gave them a taste. As I considered the sensory feedback I fired up the grill and got the steak tips going. A summary of our initial impressions goes a little something like this:
Once dinner was ready we got down to round two. In addition to grilled steak tips we also had a pine nut couscous and Brussels sprouts on our plates. 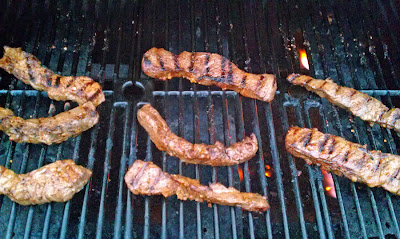 We brought wines in to try two at a time. The two that paired best were the Rooster Hill and McGregor Vineyard wines.  The Fox Run Lemberger paired nicely as well, but we were giving it some air (see the notes above) and thought it might do even better overall on day two. The Goose Watch wine was too fruity for the pairing. Yes, the Pinots were overrun by the beef and marinade, but I didn't have any salmon on hand! The spice notes and acidity of both of these wines were the assets that made them work with the steak. The marinade on the steak was both sweet and spicy so a wine with some body and spice character of its own would be destined to work best.

After dinner I headed to the computer to watch the live stream from the tasting event, listen to Q&A from participants and interact with folks in Twitter who were tasting and sharing notes on the same wines. The most important message I heard producers relating to those participating is that their region is distinct from others and they need to continue to work to figure out which grapes work best and on which sites in order to continue to improve the wines. The specific questions about how Lemberger does in the region affirm this notion. Peter Bell from Fox Run indicated that while Pinot Noir is hard to grow anywhere in the world, including the Finger Lakes, Lemberger is proving to less fussy and produces quality wines when sited in a number of places around the region. Eschewing comparisons to other wine-making regions all of the winemakers assembled kept the focus on what their regional experiences are telling them and what work they are doing to continue to grow given the conditions they find in their vineyards.

Jason
Posted by Jason Phelps at 10:00 AM