One of the books on my summer reading list was Dark Tide by Michael Puleo. This book was the winning selection for the city-wide reading project in Boston this year. The reading program culminated with a Boston Public Library event on September 20th with the author. Margot and I both took the afternoon off and planned a fun day in the city, finishing with the evening lecture at the library. More on the book and the event later. 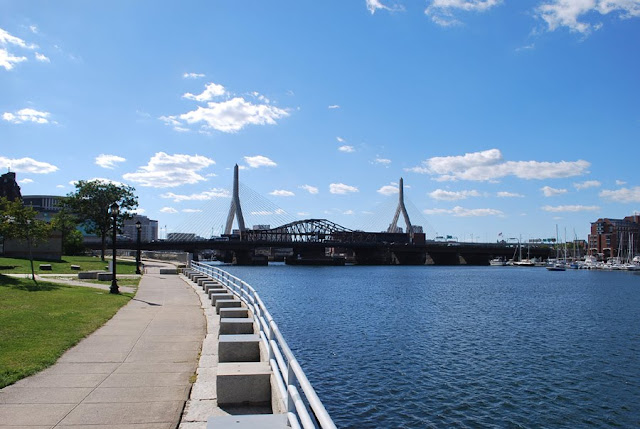 A beautiful day in Boston.
Margot hasn’t been in Boston with me since February and before Clover Food Lab debuted their truck in Dewey Square. Earlier this year I wrote about Clover during their second week at the new location and have enjoyed breakfast and lunch there a couple of times since. Margot has been dying to check out their fresh, vegetarian menu and especially the rosemary fries. Unfortunately, and only at first, did we think our visit would be incomplete when the board said they were out of fries. We ordered sandwiches, a chickpea fritter and soy BLT, and a couple of ginger lemonades grabbing one of the nearby tables. And then the cavalry arrived. I watched attentively to see if a crate of potatoes was on the supply truck and then they appeared. These fries are worth the wait. Freshly thin cut, fried golden brown with so much rosemary you’d think that was all there was. You can smell the rosemary in the air when they are cooking. Mission accomplished. 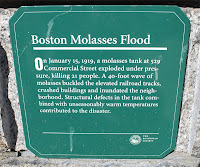 The next stop on our journey was to the very small and easily missed plaque explaining the incident of the Great Molasses Flood of 1919 on Commercial Street in Boston. You will find it on a stone wall near the playground and bocce courts on the Causeway Street end of Commercial Street. Not much for such an unusual historical event. We walked along the waterfront for a while on a beautiful fall day.

From there we headed over to Boylston and Newbury streets to poke around in shops and get some dinner before heading to the library. I had a few places I wanted to visit where I hoped I might turn up some additions for the bar and future cocktails. As I write this I am enjoying my very first glass of Berkshire Mountain Distillery’s rum that was purchased at Bauer’s Wines & Spirits on Newbury. This is a great example of a gold rum with clean flavors and a moderate amount of oak aging influence. The newest batch of BMD Bourbon hasn’t hit the shelves yet, but I’ll be there the day I find out it has. They also make several styles of gin, a vodka and a corn whiskey that would be worth checking out. Another great way to go local!

We also stopped in at Deluca’s, one of the neighborhood markets, where I found some ginger beer and blood orange bitters. Stay tuned for my exploits using those two new ingredients. 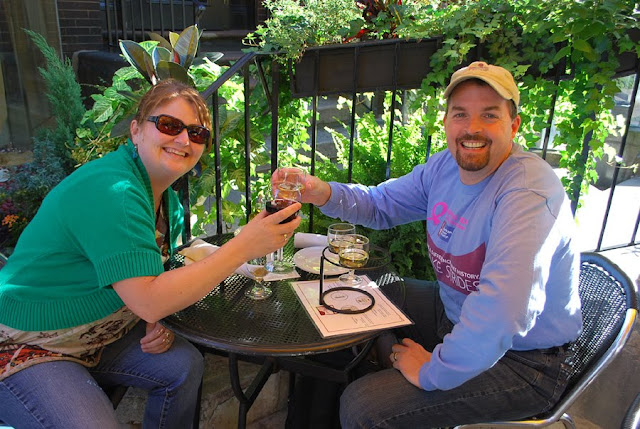 Our food and wine needs were well satisfied at Piattini Wine Cafe on Newbury. Our waiter David explained that in Italian piattini means small plate, and that the small plate selections on their menu are a popular way to try a variety of dishes with your fellow diners. Their wine list has selections from around the world and of course a nice concentration on Italian styles. To drink Margot went with a glass of the Castello D’Albola 2004 Chianti Classico and I chose the Fresco Bianco flight. My flight included the 2006 Pala Vermentino ‘Crabilis’, 2006 Veramonte Sauvignon Blanc and the 2004 Domaine Schlumberger Pinot Blanc. Our small plate adventure involved the Misto di Formaggio (olives and three cheeses), Bruschetta Gamberetti (shrimp bruschetta) and the Ravioli ai Funghi (mushroom ravioli). 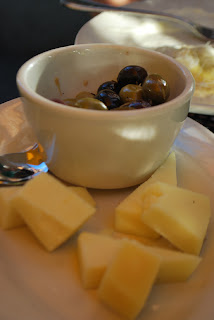 The wines in my flight represented a couple things for me, two new varietals in the Vermentino and Pinot Blanc and overall a good bet that the restrained flavors would make a good match with the variety of foods we would be trying. The Vermentino had mild aromas of field greens and a nice clean finish. The tasting notes indicated I should watch for an “almond-like aftertaste”. I don’t know that I identified it as almond or almond-like, but I could detect something of creamy sensation, and the distinction they were making was quite evident. The olives expressed some sweetness in the wine, which was both interesting and refreshing. The Pinot Blanc had a wonderful lemon nose, was crisp with a medium length finish. It went well with all three dishes and tasted fresh with each sip. I’ll be buying some of this for additional food pairing experiments. The Sauvignon Blanc had the most pronounced nose of the three wines, containing some green pepper and grass, with lots of citrus flavors that stayed through the finish. It didn’t pair so well with the food, coming across bitter except with the bread and oil that didn’t seem to affect it one way or another. The Chianti Margot was drinking was very good. I am ashamed to admit that my only taste was with the mushroom ravioli and that I found it worked well, but we didn’t take any notes. 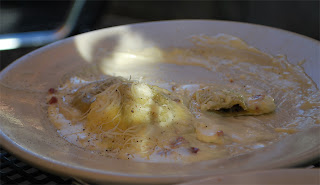 All three dishes were very tasty. The bread used for the bruschetta was over toasted but with other bread on the table that was easily resolved. The shrimp and pesto on it were very tasty and the fresh red and yellow tomatoes were a pleaser. The cheese plate included Manchego, Auribella and Trugole, all of them tasting fresh. The Auribella had the strongest flavors of the three, almost tasting like a young parmesan cheese. The mushroom ravioli was the star of the show, served with a creamy pancetta sauce. David clarified that we indeed were aware of the meat in the dish when taking our order. We were confused, “yes we want mushrooms and meat in the same dish”, but he explained that more than one a vegetarian ordered this dish without fully reading the menu only to be met with something they didn’t want to be in the same room with when it was delivered. Not us. At one point David checked on us and offered an insider tip for us based on our glowing review of the mushroom ravioli. From time to they offer a special of a black truffle stuffed pasta served with a white truffle sauce, but should we come by and it isn’t mentioned we should ask, because if they have what they need the chef will happily prepare it for us. 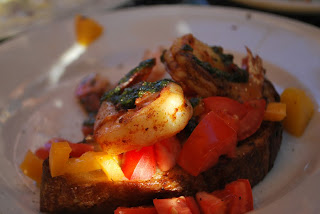 While we ate we struck up conversation with Colleen and Tara sitting at an adjacent table. As we talked we realized they were foodies too, and then the conversation got serious. Food truck weekend in NYC, a tip to try the Kim Crawford New Zealand Sauvignon Blanc and the “compost cookie” at Momofuku Milk Bar in New York. I found a recipe for the cookies that have a name that is totally worth exploring. We passed over our card and told them to shoot us an e-mail so we could get them on the invite list for out next wine tasting. 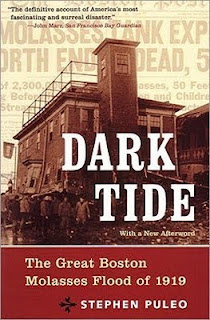 And finally, the molasses flood. The Rabb lecture hall at the Boston Public Library was standing room only by the time the event kicked off. Dark Tide has been selected an astonishing 13 times for city reading projects. I am elated to have been able to participate in just one and learn something about a historical event largely relegated to the urban legend that molasses can still be smelled in the hot summer air 91 years later! The author, Michael Puleo, covered a lot of ground in 90 minutes and more than I can faithfully cover here. I will share two things that help place the book in a literary context. First, there are four parallel themes woven together in the book. From the role of US Industrial Alcohol in constructing a faulty tank to store molasses used in the production of industrial alcohol for the making of munitions during World War I, a change in the relationship of corporations, government and society, the rise of anarchists and social unrest and finally to immigration and the lack of involvement of non-citizen immigrants in the goings on in their own neighborhoods. It sounds like a lot but the themes played out together then and were fit together well in the book now. The second aspect that is notable is the telling of the story through the eyes of people whose lives would not have otherwise been shared if this event had not occurred, and I venture if this book had not been written as well. To this day, Dark Tide was published in 2003, there is not a single other book written as a historical account of this event. Being figured in this book is a very singular historical legacy to be sure. Mr. Puleo explained who he felt the heroes and the villain were in the book and how he enjoyed sharing the stories of ordinary people whose lives were forever changed by a wall of molasses 40 feet high travelling at 35 miles per hour on a cold day in January of 1919.

One quote from the book stands as an example of how unique this event was and still is. “Send all available rescue vehicles and personnel immediately – there’s a wave of molasses coming down Commercial Street”. This was uttered by Frank McManus, a Boston police officer, during what would have been a routine report back to the central station if the molasses tank hadn’t collapsed right in front of him. Talk about a strange phone call to have!

As we made our back to the bus via South Station we came upon something that I still can't figure out. The stairs up from the train and the entire lobby of the station were decked out with advertising for Appleton Jamaican Rum. This is my very favorite rum and the 12 year aged had a beautiful banner hanging from the ceiling. It was my final picture of the day. From molasses to rum, a fitting way to end a fun day in Boston! 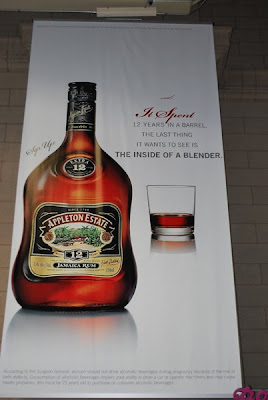 I'm going to send Connie a link to this. He'll enjoy it every bit as much as I did!! Thanks :-) Kate @ kateiscooking

The Molasses Flood is a weird obsession of mine! What fun must have been had :-)

I actually bought that book for my father-in-law for Christmas last year and have been wanting to read it myself!