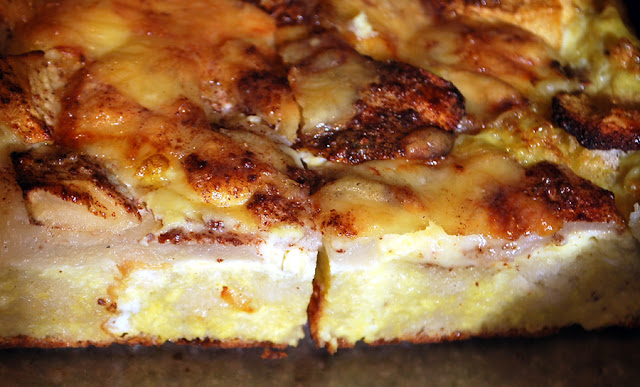 I woke up early on Sunday morning and got right to work on our post on the charity wine tasting held the day before. An hour later I was getting hungry and figured that if I made some noise in the kitchen and got the coffee going Margot would be up soon after. Me, sneaky?

But what to make for breakfast?

We had some chunks of Italian bread and some sharp cheddar cheese left over from the event the day before and a breakfast casserole came to mind. Plenty of eggs in the fridge. With no bacon around I wasn’t sold on the idea, but then genius struck. Forget the meat. I used sliced pears and apples instead. To add some complexity to the dish and maybe flavors reminiscent of meat I used some Chinese five spice with the salt, pepper and cinnamon to season the casserole.

Thirty minutes later we had what turned out to be the best breakfast casserole to ever come out of our oven!

Preheat the oven to 350. Spray a glass baking dish with non-stick cooking spray. Place the bread in the bottom of the dish. Layer the apple and pear over the bread. Sprinkle the cheese over top the fruit. Sprinkle the seasonings over the top. Beat the eggs and half & half together. Pour into the baking dish, covering the bottom. Place in the oven and bake for 30 minutes or until a nice inserted into the center comes out clean. Allow to cool a bit and serve.

Lovely casserole, breakfast is my favorite meal of the day but i don't have it often enough. I just noticed that you have an 'easy' category for your entries. I love that, I need to add that too!