Margot and I excited to be celebrating our 200th blog post with some wonderful tasting notes on Margot's recent homemade wine, a Blackberry Cabernet. 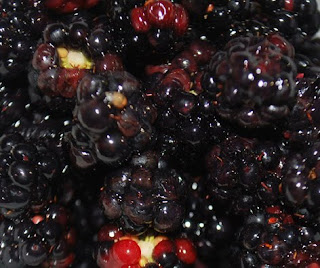 It started out harmless enough. We had a few big bags of blackberries from our vacation house in Vermont. Like many others we had used these blackberries to make jam, cobbler, pie and in granola, cereal, yogurt and smoothies. Unlike many other people I happen to live with an award winning amateur winemaker, and I had been watching him…and learning.

So I made the decision that those blackberries were mine and I had a devilish idea. Jay had recently purchased some cabernet grape juice, and wouldn't you know that there were a few gallons left over. Hmmmm, I think I’ll take that too. Just like any good cook I looked at what I had around and created something interesting. Little did I know where the madness would lead.

The idea really stemmed from a wine kit that I had made a few years back, a Wildberry Shiraz. It was my first stab at winemaking and it came out quite good. Jay and I came to call it “Sangria in a Bottle.” Though it was a nice light summer sipper it just felt like the berry flavors really outweighed the Shiraz. So this time I had my heart set on a red wine with blackberry flavoring to bring out the natural berry undertones of the red wine, and with that the Blackberry Cabernet was born.

The ratio used was 6 pounds of blackberries to 3 gallons cabernet juice. The results have been fantastic (if I don’t say so myself). The nose on the wine definitely lets you know that this is a Cabernet. The blackberry is present but it enhances the expected berry notes in the Cabernet rather than overtaking and masking them. Upon first sip you realize that the nose did not lie, you taste Cabernet first and blackberry second. This is no berry juice wine, rather it is a Cabernet with the jammy, berry undertones you expect, those undertones are just brighter. Though I have yet to try it with dark chocolate I am sure that it would be a perfect match. Can you really go wrong with dark chocolate and berries? I think not. Well I guess Jay just may need to watch his back at the amateur wine competitions this year….wifey is pulling up from behind.

Sounds fabulous. Wish I could try it.

Congratulations! Great way to celebrate! Here's to many more.

Oh, i do look fortward to reading your blogs... how dare you tease with the berries and chocolate!
Thank you for commenting on my blog, how we love Grafton Village cheese... Have you been to Sugarbush Farm in Woodstock? You have to go this fall, if only for the views....

Kudos to you for your 200th post. You have a great blog.

It must be so much fun to make your own wine!! I just made some blackberry jam with a local port- I highly recommend you try it with some of your own blackberry wine!!

Margot has made a few batches of wine and I have liked them all as much as I have liked anything I have ever made. Proud moments in that that I was able to pass on my home-grown learning to someone else.

Margot has gotten more involved in the winemaking so most of our stuff is made by "us" now which suits me just fine. Having the best friend and team member anyone could ask for standing beside me is a winning combination that we both are going to continue to exploit!

Good for you! Sounds like you did a great job :)

Congrats on 200!
Dark chocolate, berries, and wine - sounds like a great combination - way to celebrate!
LL

Margot you go girl. . .! The wine sounds so delightful, I would have loved to taste.