*** Competition update: After this post was published the complete results of Sunday's contest were made available. Luck was shining on more of the folks we have introduced you to in the last few days. David Garcia took first place in People's Choice and Mary Alice Kropp took second. Add LeeRoy Watson's second place finish in the Verde People's Choice contest and Margot and I feel so lucky to have been in the right places at the right times to meet all of them. Congratulations to everyone who competed!!! ***

Red chili is big business. Everyone we talked to on Friday and Saturday told us to expect more people and more showmanship during on the last day. The size of the crowd ebbed and flowed and it is likely there were more people overall, but at its peak the crowd seemed similar to the day before. 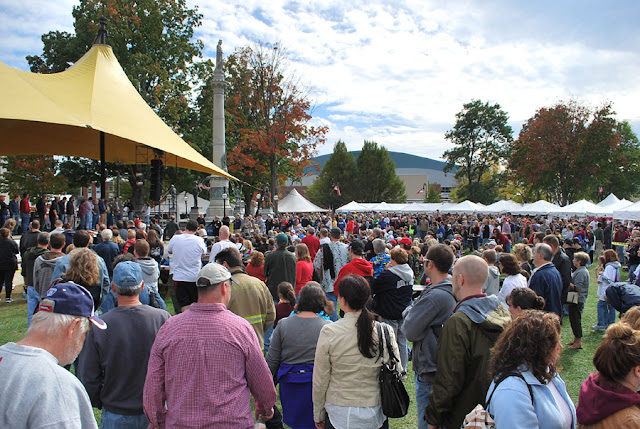 The energy level however, was definitely turned up to 11. Competitors were calling out their identification numbers to remind cookoff-goers who they should vote for in People’s Choice. Booth flair was in high gear with decorations, snarky signs and lots of goodhearted ribbing between competitors. The potent smell of spices in the breeze shortly after noon when the cooks could get to cooking was wonderful.
We checked back in with Garcias, who we met on Friday, and found them hard at work getting their competition entry started. They had a good location at the end of the first row of booths to the right of the stage. I’m sure they saw a lot of traffic once their samples were ready. We both found their chili to be pleasantly smoky with a nice texture to both the meat and vegetables. 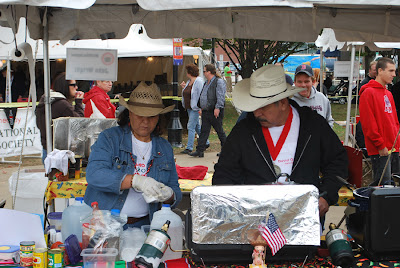 ( Alicia & David Garcia hard at work. )
As we walked around the booths a jacket with competition dates embroidered on it caught our attention. The owner was Charlie Ward. He and his wife Barbara were both competing in the day’s event. They have been competing in chili cookoffs for over 27 years and Charlie is the only ICS competitor ever to have won twice in three different countries. Between the two of them they have cooked or judged in 48 of the 50 states. They hail from Rosamond, California home to Edwards Air Force base, a frequent landing spot for the Space Shuttle. They were so happy to talk to us. It was very easy to see their passion come through. 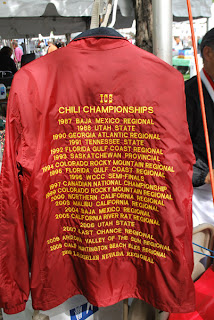 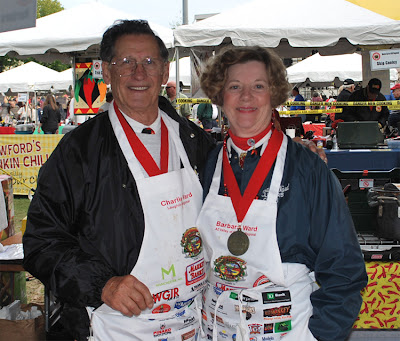 ( Twenty-seven years of smiles. )
We asked Terry Brow what made Canadian chili different. Jokes about how chili was invented in Canada were fast and furious, but the answer was to come in the taste. Margot identified a hint of maple syrup imparting a nice earthy backbone. Yet another wonderful usage for a plentiful product around these parts. 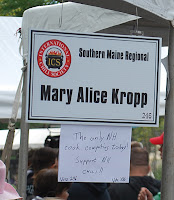 We checked in with hometown team, Mike and Mary Alice Kropp, again who were the only NH residents competing in the final day. Mary Alice was the official qualifier but was surrounded by family as she crafted what she said “was the best pot of chili I’ve ever made.” The line flowing out from their booth was consistent with both a beef-based and a vegetarian offering to please visitors. Mary Alice told me to come back at 2 PM after her entry was complete and turned in for a taste of her carefully crafted chili. I did, and I wasn’t disappointed! 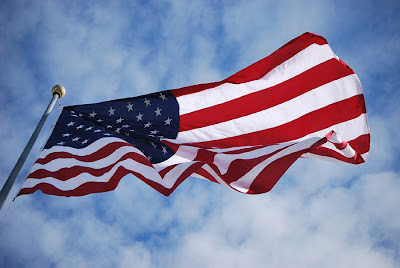 ( The flag was flying proudly over an event bringing all of America together. ) 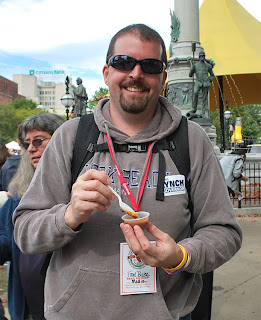 ( Jason really enjoyed the chili samples! )
Through all of our adventures we have learned that everyone has a story. That is one of the main reasons why people blog after all, to tell their stories. During our Chili Cookoff weekend we met many wonderful people who graciously offered us a glimpse into their chili story, and their lives. One such person was Lee Wood from the RatPack in Massachusetts who we had the pleasure of meeting on Saturday.

Like most of those we met we asked Lee how he got started in chili, and the answer was one of the best, and most heartwarming we heard. Lee got into the chili scene with his brother Darren as his partner. As a team these two brothers managed to make it to the Worlds many times, Lee has qualified 9 times for different categories. Then, in 1999 Darren was diagnosed with cancer and within 9 months of diagnosis lost his battle. It was a hard blow for sure and something that still brought tears to Lee’s eyes 11 years later.

Lee continued to talk about his and Darren’s collaborations the main one being “The Silly Hillbilly Chili” booth that they built together to bring to competitions. This booth was a trailer decked out with a hillbilly theme. Those that worked the booth dressed and played the part for the crowds. Lee lit up as he recalled Darren’s ability to lose himself in his character, working the crowd and making sure that everyone was a having a wonderful time. With a Banjo player and their father on harmonica Darren was grab people from the crowd and dance and carry on, from the youngest child to the oldest lady no one was safe.

Before he passed Darren made one request of his brother Lee: that he would not get rid of the booth until they won a world title. Lee made sure that the booth could last, coating his brother's hand painted designs so they could weather the elements for as long as it took. Lee, his family and friends agreed that once the promise was fulfilled they would have a huge bonfire and send the Hillbilly booth off right. When we finished speaking with Lee he said that he was hopeful that this year would be the one that they could win for best booth and that they could finally honor Darren’s request. Lee told us that he had just received approval from the Manchester Fire Department the night before to bring the booth in on Sunday.

We were both very excited to see this booth and to meet up with Lee again today. We looked everywhere for the Silly Hillbillies but were unable to find them. We are not sure what happened but we hope that Lee, if he is reading this, can let us know. Lee, thank you for allowing us to hear Darren’s story and we will never forget. So booth or no, you and Darren have touched our lives. 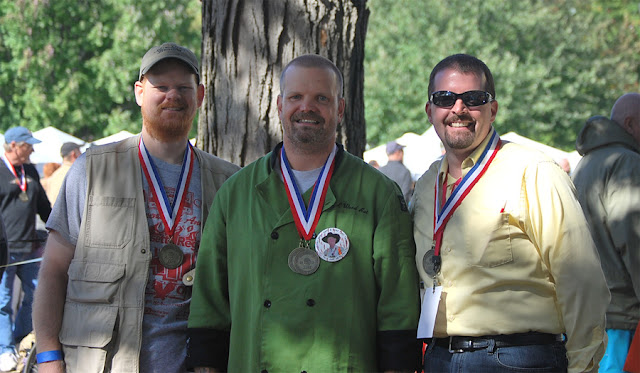 ( Curtis, Lee and Jason spending time before the salsa judging. )
To finish another beautiful autumn day Manchester-area perennial favorites Mama Kicks provided soul and blues inflected rock from the stage. Lots of children took to dancing and admiring the skill and energy of the band. The audience recognized the energy with applause after many expertly executed covers of much-loved songs. 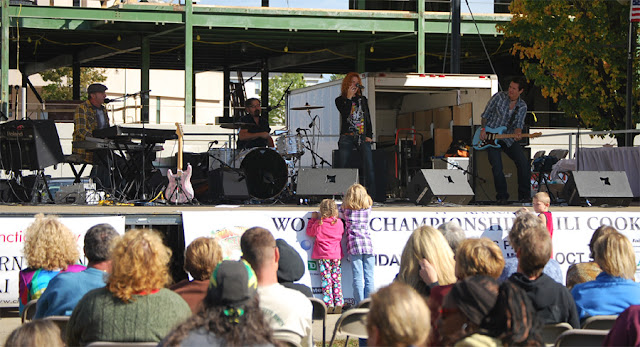 Let's hope this isn't the last time this event, and many others like it, come to Manchester. We loved sharing our local color with folks from all over. We can tell they enjoyed it and are going home with stories of those crazy people from New Hampshire who really like their chili!

The final day's results have been partially posted at the ICS web site.
Posted by Jason Phelps at 7:27 AM

Snarky sign? I don't think it was sarcastic, impertinent, or irreverent in tone or manner.....you must have liked it enough to take a pic of it.

We didn't take pictures of the snarky signs. They mostly had to do with not wanting to get asked why they were out of samples so early.

Funny sign! Haha I can't believe how many people there were. I loved hearing the stories of some of the competitors. Thes chili cookoff posts have been so much fun!

This was a very rewarding experience for us. Everyone's comments have been so nice and we have gotten some local press (forthcoming) based on people spreading the word about our coverage. Unbelievable!

Thank you all so much.