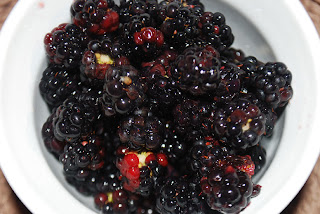 I have always been a huge supporter of Jay and his wine and food ventures. Nothing makes me happier than to watch his hard work pay off; whether the payoff is a delicious meal, amazing wine or accolades from others for both. You could not have found a wife more proud of her husband than me as he walked to the podium over and over to receive his medals at the WineMaker Magazine awards dinner in May. But from that pride for him plans were hatched to get one of those sweet medals for myself!

I am humbled to say that those plans have paid off. As I posted a few months back I had worked under the tutelage of my husband (or as we Star Wars nerds say: the Padawan Learner to his Master Jedi) developing a Blackberry Cabernet. This idea came about when Jay had some Cabernet juice left over and I eyed a few large bags of blackberries (look at them above just waiting to be turned into award winning wine!) picked at our house in Vermont. The resulting wine was wonderful, the blackberry enhancing the berry flavors from the Cabernet juice without overpowering it. Both red and fruit wine drinkers alike gave me good feedback. Still, you never know with the judges.

This past weekend we found out that my wine had taken a Silver Medal in the Amenti del Vino 2010 Competition. To say that we were thrilled with this news is an understatement. Though I deeply appreciate being recognized by the judges it does not compare with allowing Jay to feel a little bit of the pride that he has given me the opportunity to feel over the years.

Now….only 26 more medals and we will be tied with Jay. I may not get there but it will be fun trying!

Margot
Posted by Jason Phelps at 7:21 AM

Congratulations Margot! You and Jason sound like the perfect match. Good luck with your continued winemaking venture.

Congratulations on your award. Your creativity paid off.