Thursday October 28th was Global Champagne Day and the tweets were flying fast & furious. Vintuba was the organizer of the event providing links to meetup.com groups, classic pairings and educational facts about champagne. Sign us up! The Twitter hashtag #champagne was used to tag tweets during the event. 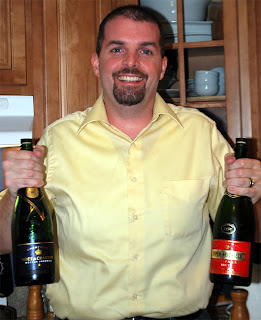 ( Getting ready to party! )
One thing that was clear from several of the web sites advertising the event was that we were talking about real champagne, from the Champagne region of France, made in the traditional style. A link for a petition from the Office of Champagne USA was circulating before and during the event. The petition was entitled “Demand Truth-In-Labeling” and was intended to represent the protection of places of origin in the wine world. The Office of Champagne USA is the domestic representative of a champagne focused trade group in France. Reading the list of regions being represented I was a bit suspicious. I held off trying not to mix my politics and fun.

Leading up to the event I learned two things about champagne. First off, grower produced, often considered artisanal champagne, selections can be even more interesting than the mass produced named brands that we all know. And secondly, my local New Hampshire Liquor Store does not have a great selection of real French champagne, and no grower produced bottles that I could see. I went with the Piper-Heidsieck Brut and Moet & Chandon Imperial Nectar instead. We had never had either of them so at least they were new to us!

My plans up front were to pair the champagnes with a several different foods and make two different kinds of cocktails. I gathered smoked salmon pate, smoked oysters, gorgonzola cheese, potato chips, crusty French bread and dark chocolate. We’d be leading off with hot buttered popcorn, a go-to casual pairing for a sommelier friend of ours. We hadn’t tried that or fresh French fries with bubbly yet and I guess we would find we were missing out. 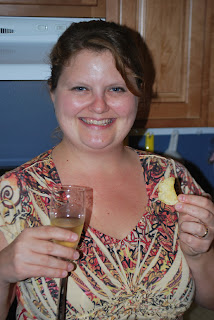 ( Did somebody say champagne with potato chips? ) 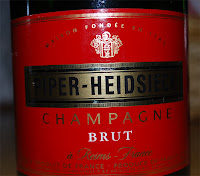 Piper-Heidsieck dates back to 1785 and currently produces over 5 million bottles of champagne each year. They own no vineyards of their own and source grapes from 60 vineyards around the Champagne region, making 6 styles of champagne including vintage offerings in the very best of years. The Remy-Countreau wine and spirits group acquired Piper-Heidsieck in 1990.

The Piper-Heidsieck NV Brut has some grapefruit on the nose, citrus flavors and a long smooth finish. The balance of tart and sweet reminded us of Granny Smith apples. 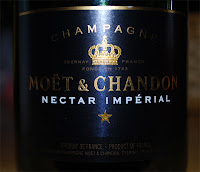 Moet & Chandon is one of the largest champagne producers with annual output of 26 million bottles. Established in 1743 the house currently owns 2,500 acres of vineyards. Dom Perignon is made by Moet and is the most recognizable champagne label in the world. Moet & Chandon are co-owners of the Moet-Hennessy / Louis Vuitton company, supplier of other fine spirits and luxury goods.

The Moet & Chandon Nectar Imperial is a demi-sec (semi-sweet) champagne. The aromas were focused and the flavors of honey and dried fruit were easily detected. It is sweet, but not so much so that the crispness is lost.

Both champagnes were great with the hot buttered popcorn. Something about the warm butter makes this work really well. The pairing with the potato chips didn’t evoke the same feelings but was not terrible. We could see where french fries would come into play here. 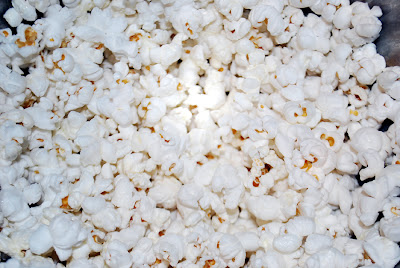 ( A TV time snack goes on a date with champagne! )
The gorgonzola cheese was overpowering for the Piper, but was an average match for the Moet. Not a big player in the pairings, but we sure enjoyed eating it!

Neither of us actually liked the smoked oysters and the champagne didn’t help with that based on our experience. The smoked salmon pate however was fantastic with the Piper and a of touch of creamy dill mustard brought out a bit of the sweetness in the champagne.

I made two cocktails, both of which came out great. The second is one of my best tasting cocktails ever.

Off To The Islands

The “Off To The Islands” has an incredible balance of crisp and sweet with flavors of island fruit and citrus. The "Ginger Lemon Bubbles" has a warmth from the spicy ginger with nice vibrant flavors from the citrus and bitters. The sweetness from the champagne was a nice foundation. We'll be making both of this again soon!

We very much enjoyed learning a little bit more about champagne and trying a few new to us bottles for Global Champagne Day. These online wine events seem to be quite popular and clearly give folks in disparate locations a way to share what they are drinking, where they are drinking and a bit of their lives with each other in celebration of beverages we all love!

How fun...I didn't know there was a "Global Champagne Day!" I love champagne...so fun and celebratory :) Fun to know it pairs well with popcorn too. Thanks for the fun info!

There was an event hosted by Veuve Cliquot on Saturday in Naples Florida. I missed it but my daughter was there and she said it was a lot of fun, with delicious tappas and champagne pairings.

This looks like the party of my dreams! I love Champagne and all of the pairings you did. So fun!

I had my first-ever Veuve Cliquot as an engagement gift from my new sister-in-law several months ago, and just had my first Dom Perignon as a wedding gift. Died and gone to heaven, twice.

We have a local Methode Champanoise producer (Pinot Noir and Chardonnay) in our local area, and I'm pretty hooked. I'll post sometime soon about visiting there on our winery tour with our out-of-town wedding guests... what a ball! Jason, you and Margot MUST make plans to visit Chez Spettel soon!

Missed the Twitter event, but I'll look at your tweets to see what you had to say there.

Another excellent post! Love the pairings, though I'm not a popcorn fan... I can see the butter part! Have to admit that I've indulged in champagne (a bit of Veuve) with those krinkle cut thick potato chips on more than one occasion!

You and Margot may be able to convince me to try champagne with these pairings and cocktails. I'm more of a prosecco fan but the first drink sounded REALLY good. Kate