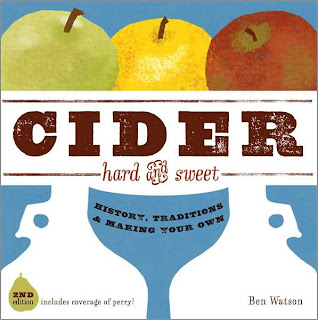 I picked up the second edition which includes new material on Perry, i.e. pear “cider” for most of us who would never have heard of this otherwise. This book ended up being a nice bump for me after my cider experiment in 2009 and all of the feedback I have received on the different styles.

The wonderful thing about books like this is the fact that you get information of all kinds. A good start is a history about the beverage and then add in process, customs & variations, DYI details and last but not least tasting, pairing and applications/cooking.

Cider has a long and storied history around the world. While production volumes have changed a lot over the years it stands to reason that some of the very best cider products are available right now, if you know where to get them. Today I enjoyed the section of the book on the departments of Normandy, France and their customs in the making and consumption of Calvados. A kiss of Calvados on the lips during baptism and we can’t love the French?

Ben Watson, the author of Cider: Hard and Sweet, succeeds in an impressive effort to present a breadth of information on a topic that isn’t familiar to most, and seems to point to a tradition in decline from its heights. That is certainly true, but the upside with reading Watson’s book is knowing where to get good cider, he readily tells you about all of them, how to serve them and what enjoyment awaits those that do. Our own home-state favorite, Farnum Hill Ciders at Poverty Lane Orchards and its owner/cider maker Steven Wood is quoted, described and toasted in the book.

I made cider for the first time in 2007 after a bad go of making an apple wine in the two years before. My initial attempt at cider including charging the bottles much like you would with beer (creating the bubbles through a closed fermentation) resulting in volcanic openings on a couple boxes. My 2008 batch was still (no carbonation) and worked much better. The sections of the book on basic cider making, upgrades and longer term projects represent a true hands-on experience and processes others could follow to a happy outcome.

I love cider, but my experience with it is pretty limited. Once I could make my own I didn’t end up tasting too many others. I remember buying Farnum Hill ciders right after college and drinking them with my now wife on our weekends away together while she finished school. At the recent Wine Riot in Boston I had a heritage varietal cider from Farnum Hill that blew my socks off. I’ve also had Woodchuck and Cider Jack, but they aren’t the same beverage.

In my cider post earlier in month I explained my approach to a 7 bucket project to produce a bunch of different cider types. I got good results from all of them and one just took First Place in Common Cider category of the Northeast Regional Homebrew Competition. I’m learning and trust me I coming on strong again next year with new ideas and new products.

Towards the end of the book Watson shares recipes and cooking tips. Braising meats with cider is a slam dunk. Marinades and salad dressings using cider are not a stretch. (Recipes below)

Making your own cider vinegar sounds easier than most people, including me, would have thought. I am hoping this extends to wine vinegar as well. Unfortunately I have some wine I could blend for vinegar (it isn’t good to drink), but I’d like to use cider to make vinegar on purpose. Allowing a finished wine/cider to aerate in a warm dark place and then stabilizing it like wine can net gallons of ready to use vinegar. The uses for it are well beyond cooking and a variety of health benefits have been observed in some daily consumers. Thanks Ben!

The details on how the author lined up and tasted many ciders, compiled scores and described the facets of the best ciders was very intriguing to me. Food pairing with any beverage is a lot of fun and some of the notable things we have tried with our ciders are grilled margherita pizzas, candied bacon and barbeque. Our cider party was a drunken barn dance a-la South Park, and the hangover a few of us had was pretty intense; but what a way to celebrate all the hard work!

The chapter on Perry contained information completely new to me. I made a pear wine in 2008 but found it off tasting and have used it mainly to create wine punches. Fine Perry can be made from specific heirloom pear varieties and is typically drier and sharper than that which we create from dessert pears, e.g. those that are directly edible. Pear and apple blends are noted here as well. I think an experiment with a pear dessert wine is worthy for 2011!


Barnes & Noble info for the book

I have changed the liquid ingredients using cider in place of ½ of any broth and water in an original recipe. If the recipe also calls for white wine I would continue as is, but recipes that call for too much red wine are a problem as the wine can overpower the apple flavors which are not typical in such wines.


Other NH Cider Products We Have Tried

Crispin Ciders – Crispin is active on Twitter organizing events and might be coming to NH next year.
Posted by Jason Phelps at 10:51 PM