In my post earlier in this series on holiday wines I alluded to some potential guests that might not be interested in your finely crafted wine program for the holiday meal. Beer is as food friendly as wine in the general sense. Lighter beers are often less aggressive with food and heavier beers tend to present considerable flavors that must mesh with the food to work well. Acidity and carbonation work together to present different finishes on beers, also significant. 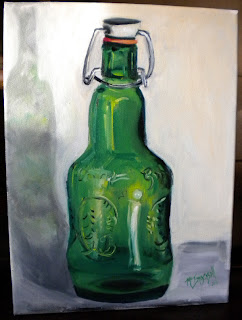 If you have beer explorers around during the holidays you will definitely want to check out some of the holiday beers that come out in November and December every year. I updated my mix this year and have the following items ready for a tasting:

The easiest way to handle the need for beer at a holiday open house is to have a cooler containing a few different commercial lager/ale options for people to grab when they want one. You might have 3 or 4 rooms of different people doing different things and letting your guests decide when and what to grab makes things less stressful for you.

For dinner time pairings I have had great success with two styles of beer. Belgian/abbey ales and freshly hopped unfiltered pale American ales. I think both of these beers have different food pairing assets.

A Belgian white is creamy and has some spices to match with almost any food. A maltier Belgian beer with a thicker body can easily handle roasted meats, squash and stuffing. Some unique aromas from Belgian yeasts can liven up different pairings. The Brooklyn Local 1 is a food friendly Belgian-style from NY. Chimay makes several abbey and Trappist style beers that should be easy to find and great matches with an array of holiday dishes. 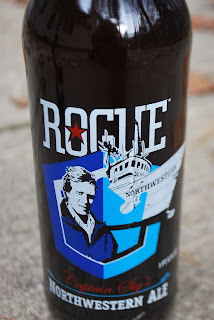 Freshly hopped pale ales have lots of citrus and pine that can work well with vegetable side dishes, stuffing and dishes with a lot of herbal flavors. Try this style with aged and flavored cheddar cheeses as well. They are very cleansing with each sip and stay lively for a long time. Sebago Brewing from Portland ME, makes a Local Harvest Ale in this style using freshly picked hops. It is aromatic, very flavorful and very refreshing. The Rogue Captain Sig’s Northwestern Ale is a bit bigger, but still a hop monster just in a brown ale form. This will appeal to heavier beer drinkers, but still provide that sold pairing foundation.

If you are looking for an innovative way to get your beer drinkers involved in cocktail hour, consider making shandys. A shandy is a blend with ale that might contain lemonade, lemon/lime soda, ginger beer or other sweet and sparkling beverage. The results can vary. Generally it turns out to be a malty, bready drink with some more citrus and/or spice and a bit sweet. Your choice of beer should be something with a light body, unfiltered and some hop influence, but not too much. Try a 2/3 to 1/3 ratio for first timers. If they like the beer better this drink won’t be a huge shock.

The painting above was painted by a friend of ours Meredith Ingersoll. We were drinking homemade cider up in VT and she asked to take one of the bottles home. She turned that bottle into a beautful painting. We have another of hers depicting  a martini glass on its way.

Here are a couple of beers we tried recently that were fun with different foods:
Check out the first two posts in a four-part series on holiday food, beverage and entertaining.

What???! Some of my guests may not be interested in my finely crafted wine program??? What is wrong with them???

OK, well, I guess I must accept what is, so thanks for giving a sister a hand here with your suggestions.I am the last person in all of Oregon to catch on to the vast micro-brews of the area. I'll try (gulp) to explore based on your encouragement, and will report my findings.

Thanks for sharing. Too bad you're on the other coast as it would be fun to share a beer.

I hadn't planned on doing any this year, but I've now got 3 gallons of cider in the primary. They have a special session of the local farmer's market the weekend before Thanksgiving and I happened across a stand that was selling unpasteurised cider. I had to try it and it seems promising. It is a blend of three varieties, but the guy manning the stand didn't know what more about the blend than that. I've got the farm's info so I'll probably shoot them an email. Anyway, it has a nice malic acid bite to it over a really rich apple flavor. It is a great blend, that they've apparently been working on for years. Beats the heck out of the cloying oversweet stuff I usually run into. The PH came out somewhere between 3 & 4 but since I'm using test strips, I couldn't get it any closer than that. The adjusted Specific Gravity is 1.051. I hit it with some campden tablets, let it rest, then pitched it with Wyeast Dry Mead Yeast 4632. It seems to be taking hold and the primary ferment is gathering steam. I'll keep you posted as it progresses.

If you are interested in collaborating on a cider post as you had mentioned, you can catch me at loren.hadley at gmail.

Hope you and your have a very happy Thanksgiving.

That painting is wonderful!
I am not really a beer drinker, but what a good idea for guests that are. I am sure these selections are perfect :)

@Pam - I often want to mix a little of a few different things with dinner. We had 5 styles of wine, 2 ciders and 1 beer with Thanksgiving last night. We had some of the wines leftover but most of the cider and beer we opened was gone. There were quite a few pairings that worked really well!

@Loren - cider is so wonderful! I opened up one of my medium dry batches from 2009 and ended up with a nice tight, medium dry medium-dry cider with a nice clean finish. I hadn't opened this one recently and the flavors are definitely different. I have to go check my notes to figure out the differences.