Everyone is drinking this week. Some in sorrow, some in celebration. No matter your politics this week we offer insight on several beers (some new to us) and how we paired them some grub! 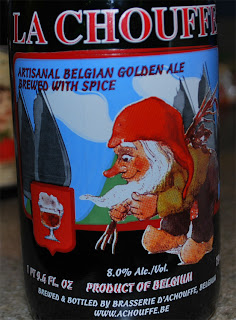 La Chouffe Golden Ale with Spice
I picked the La Chouffe up at Boston Wine Exchange on Devonshire Street in Boston. They have a great craft beer selection. They also have wine and spirits and enough to look at that you might spend more time than you expected! 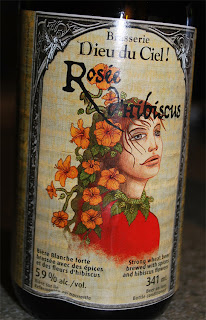 Dieu du Ciel! Rosee d'Hibiscus
Our dinner consisted of honey/ginger chicken drumstick and curried baked sweet dumpling squash. We picked the beers specifically for spice or other flavors we thought might match well with the flavors in the food. We also picked lighter styles, wheat or golden ale beers that wouldn’t have massive flavors of their own that could drown out the food. Here’s what we experienced.

With the chicken the spices in La Chouffe were extended and more noticeable and the sweetness was enhanced. The malty flavors in the Ancient Fire Belgian White popped with the chicken and the overall creaminess of this beer created a wonderful smooth combination. The hibiscus beer was interesting because the floral aromas and fruit flavors added complexity to the honey and ginger.

With the squash the sour flavor in the finish of the La Chouffe was more prominent and was coupled with more citrus. The Ancient Fire selection presented an odd sharpness up front when paired with the squash, but it retains it flavors throughout. I found that the hibiscus beer was a bit more acidic/bitter with the squash and its flavors were lost. Margot felt that the beer balance the spicy and sweet flavors with the squash well.

I picked the La Chouffe as my best overall beer and pairings and Margot picked the Dieu du Ciel! As her best. The great thing about this type of experience is that unless you find serious contentions or flaws in the beers or food there really aren’t any bad pairings, just better ones!

Earlier in the week I met Cathy Huyghe from RedWhiteBoston at Bukowski’s (downtown Boston) for a couple of beers and to attempt some pairings. I started with the South Hampton Double White, a double strength white ale from NY State, and Cathy had the Great Divide Claymore Scotch Ale in hand. We talked about the similarities between beer, wine and cider and how pairing beers requires the same food and beverage knowledge as you need with wine. We looked over the menu and choose a couple of items and two new beers to pair with them. Cathy selected the Peanut Butter & Bacon burger which would be paired with the La Fin du Monde produced by Unibroue in Quebec. I chose the Stuffed Acorn Squash which was stuffed with couscous, candied walnuts, ginger, apple and herbs. To pair with the squash we selected the Founders Red Rye, a rye beer made in Michigan. The burger and La Fin du Monde didn’t end up being a great match, but when you still get to eat a burger and drink a beer does it really matter? The squash and rye beer pairing on the other hand worked really well. The spiciness from the rye matched well with the flavors in the stuffing and the sour flavors opposed the sweetness in the squash nicely. One out of two ain’t bad!

I would definitely recommend Bukowski’s for a beer. With over 100 selection and a rotating specials offering there is plenty to try. The food is good for a small bar, so stop by for a good time!

We're going to start a batch tomorrow at a ubrew...excited for some Christmas Beer! Theresa

Yep... we are drowning our sorrows and celebrating as well! Love your descriptions, Jason!