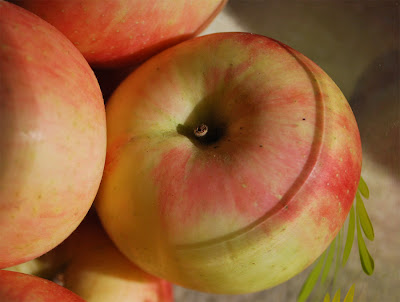 ( I hope they enjoy what I am going to do with them! )

I first made hard cider in 2005. I had tried to make an apple wine the year before and it came out so badly it was never consumed. There is one bottle of it in my wine cellar though. I keep it there hoping it will be the worst bottle in my collection and everything else we make is better. It's not a very high bar though.

In 2007 I made 10 gallons of hard cider using a cider blend from a local farm-stand. Finding unpasteurized juice for retail sale took some looking, but in the end I found it. The recipe was pretty much thrown together from a few web sites and I was a bit hasty with it, although I was happy with the result. The cider ended up being dry, quite tart but with ample apple flavor. My choice to carbonate resulted in some fun times when some of the bottles really built up pressure. Needless to say the bottles we did get to drink were a hit and the batch didn't last long. I didn't make cider in 2008 which netted me some nasty feedback from the guys. Such is life!

In 2009 I hatched a plan for a bigger and experimental run at cider. I ended up with 7 buckets full of freshly pressed, unpasteurized cider from Lull Farm in Hollis, NH. Dave, one of the owners of Lull, returned my called specifically to tell me how special (and secret I guess) their cider blend was and that he was very excited that I was interested in using it for hard cider. I had a good feeling already! Buying in bulk didn't hurt either, the price was much better.

I also decided I would make the cider still (sans carbonation) to ensure I didn't lose any of it to over charged bottles. I then set about acquiring my yeast. The local homebrew shop, Jasper's in Nashua, carries traditional cider yeast during the fall and I popped in to pick up enough for the project. It turns out that I was coming in a bit late and they only had a couple of packets left. I of course took those and then inquired as to what other styles I could consider using. I ended up with several packets each of Sweet Mead and Rudsheimer yeasts, both of which were explained to have excellent potential for a good cider. What the hell, this project just keeps getting better!

My cider base consisted of 5 gallons of fresh cider, sugar (to a gravity of about 1.080 or 19-20 Brix), wine tannin, acid blend, and pectic enzyme. I also sulfited my cider for 24 hours to ensure any microbes and such that I didn't want in my fermentation are killed off. With a yeast pitch the 7 buckets were off and running. As a matter of course I taste my batches of wines, beers, and ciders at many points through the process. This helps me understand their development. The starting base tasted exceptional and as the yeasts starting doing their work the differences between them were easy to detect. The most prominent difference was the nutty undertones produced in the batches infused with the Rudsheimer yeast. These differences persisted through the fermentation and are still accessible when tasting them side by side, albeit not as distinct or potent as they were early on. This time I was much more patient, letting the batches rest and clear after the stabilization for several months. This paid off. Every batch was a beautiful golden color and crystal clear. 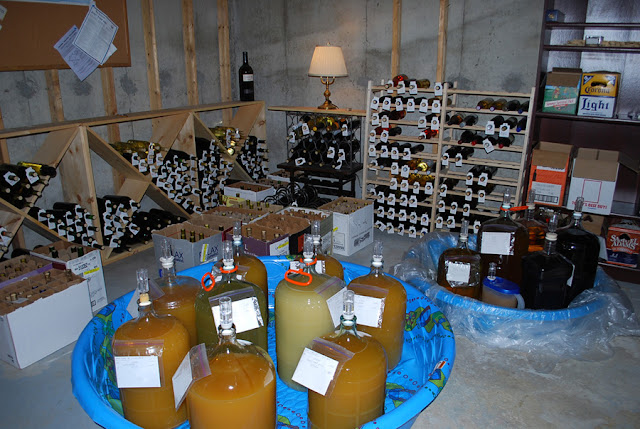 ( This is our wine cellar circa October 2009. In the kiddie pool in the foreground are 7 glass carboys
in the outer ring that contain the cider. The rest of what you see are various red, white and fruit
wines that were fermenting or aging during the same time. As you can see, we have wine! )

With so much cider available I decided that I would make several split batches with fruit flavorings made from locally picked, cherries, strawberries and raspberries. For some of the non-fruit flavored batches small additions of sugar and/or apple juice concentrate was needed to balance out the tartness. I expected to do more of this balancing but the different yeasts created varying levels of residual sweetness, making it unnecessary in some cases. Between the yeast differences and the fruit flavors we ended up with 7 distinct styles all with different aromas, flavors and textures.

Bottling began in the middle of winter and proceeded slowly. In April we had a cider party where we put a bucket with a spigot up on the counter and got out the party cups for guests to enjoy as they wished. We shared two styles this way and got people talking about the differences. It was great fun to explain the process to my friends and share the wonderful outcome.

The cider has been greatly enjoyed all year. We headed off to summer parties with coolers full of it. Making friends was pretty easy that way! I have cooked with it and made a few cocktails with it as well. It really is a delight to be able to go to the basement and pick from one of seven varieties. It won't last forever though!

This year I entered my hard cider in the Northeast Regional Homebrew Competition. I entered bottles from one of the buckets infused with the Rudsheimer yeast. I felt its overall balance was excellent and flavor profile was interesting enough to throw my hat in the ring. That choice paid off big, really big. I took First Place in the Common Cider category for having the best traditional cider in the entire competition. This is my first win for cider and now means I have awards for wine, mead and cider. Beer is next! A great experiment turned into a great reward and some wonderful recognition.

I didn't make hard cider in 2010 on the count of having so much around still, but it is likely that I will make it again in 2011. If I do I am hoping to search out pressed cider from a blend of cider-specific apples or we may even get the apples and press the blend ourselves. The idea would be to recreate an older style of hard cider made from apples traditionally cultivated for just this purpose. Will we be able to find what we need, who knows?

Congratulations on first place!! Your basement is probably the coolest basement. Ever.

Holy cool basement! That is amazing! Congrats on your cider success; I bet it is delicious!

The wild thing about the basement right now is that there is even more down there now and on top of that we have the equivelant of 300 bottles aging in their glass carboys!

The holidays are going to be fun.

If I lived near you, I`d be over there as your apprentice -- payment in kind is all I ask. I respect your work ethic...producing that much alcohol takes a lot of work! Award winning -- congrats! Theresa

how are you washing all those carboys ??