So You Think You Can Judge A Salsa Competition?

I was randomly approached and asked if I wanted to be a judge for the 2010 World Championship Salsa Competition. My response was “are you sure, I have never done anything like that before?” I quickly found that no prior experience was necessary. There are some guidelines to the judging process but it really comes down to how the entries taste. 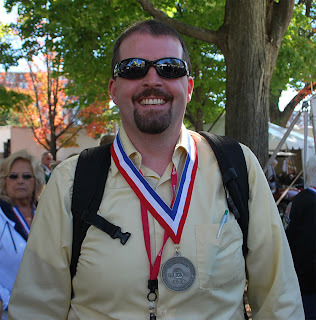 After I got signed up to judge, got my fancy judging medallion and judge’s apron I had to wait around a bit. I took this opportunity to ask some of the other judges how it all worked and what I should be thinking as I participated. It seemed pretty simple, work around the table you are assigned to tasting as much or as little of each sample. We would be judging the best in the world of salsas so it isn’t a matter of good versus bad, rather how good. If the salsa really knocked my socks off I was told it would be smart to put a mark on the judging form next to that entry so I could come back. Palate cleansing with water or beer in between was advised. If the entry didn’t make a strong impression, no mark and no return, so it would effectively not be culled down to my 1st, 2nd and 3rd choices. As I went I shouldn’t make any outward expressions about my likes or dislikes so as not to influence others. Once I had made a second (third or more) visit to the ones I liked I would have to pick the top 3 in order. Judges are also obliged to provide a comment on each entry to help competitors understand how their entry was received. Comments should be positive, e.g. “I personally thought there was too much salt”, “I would have liked more heat” or “excellent balance of flavors.” Got it, this is going to be fun!

The judging organizers corralled all the judges and addressed us with the process, explained the rules (which were presented well in what I heard above) and had one additional order of business, picking the judges for the final table. I was randomly selected to judge the 26 final competitors and cast my vote for the World Champion of Salsa. I never thought I would have that on my resume! This meant more waiting, but I had struck up conversations with several folks by now so the time was easily passed. 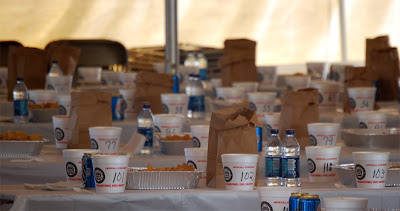 ( Very organized and waiting for judges )
I found out some more inside scoop on these types of cookoffs. Not only would you expect competitors to travel the country to enter chili cookoffs, but there are also folks that travel more regionally to participate as judges for the competitions. Loving chili and salsa and supporting the community around cookoffs is more interesting than I would have ever imagined.

When it was time for the final judging I stepped up with my pencil, ballot and bottle of water. The tasting was done by placing a spoonful of salsa on a chip from a numbered container. I chose not to eat the chips to cut down on the extra salt influence as I tasted. This was a preference and not something everyone did. The water wasn’t working well as a palate cleanser so I grabbed a beer. Miller Lite! For those who know me, I like my beer with a bit more character for casual drinking and I often share my disbelief in how much light colored, flavorless beer we drink in America. I found a scenario where those attributes worked out OK, salsa judging. A combination of beer and water seemed to give me a reasonable fresh start to taste each in the sequence of samples, but I still don’t think Miller Lite will show up in my fridge any time soon! 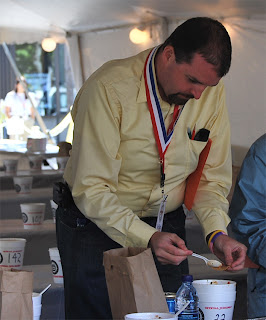 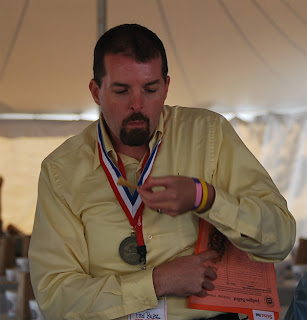 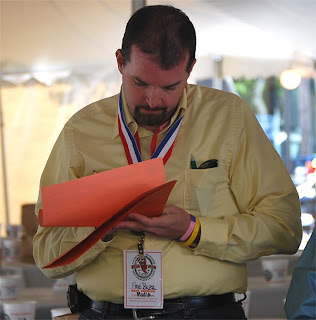 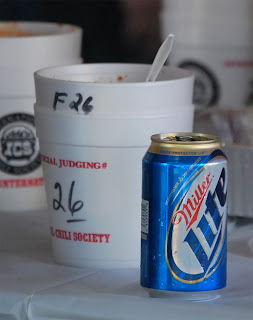 ( Margot had to take a picture of this! ) 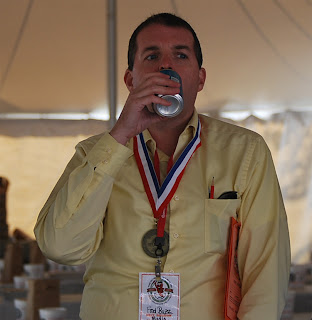 ( And me drinking it. She's too funny. )
Tasting and judging these entries was hard. These were the best of the best. Salsa is an open category which means the contents of the salsa can be from a wide range of ingredients and whether it registers as salsa to any one person might be a question. There was only one salsa, it contained cheese, that I would really say was not what I typically consider salsa. But it was good and made it this far so I gave it the fair evaluation that it deserved. There were several sweet and/or fruit influenced salsa including one that tasted like the Caribbean islands. I really liked that one and it made me think of eating chips with it on the beach in Ocho Rios, Jamaica. Nice vision. There were others that tasted like they contained dill pickles, sweet relish and several that were very, very hot; almost too hot. Ultimately I picked 3 that had good balance, waves of flavors and freshness to them. I would eat those consistently if given the opportunity. I cast my ballot and headed on to see what the chili world had to offer.

I would encourage anyone who was interested in the chance to judge a sanctioned salsa or chili competition to check out the International Chili Society’s web site for a list of events. Contacting the organizers of the event ahead of time should be done to determine if they are in need of judges, although some will still have spots open on the day of the event and will sign you up on the spot.

I would like to thank Margot for taking all the pictures. Being able to provide a step by step in pictures was a pretty cool outcome.

My first thought was a salsa dancing competition...

Foy, I hadn't thought of that until now. Maybe the judges should do some salsa dancing while they wait!!

It sounds very similar to my experience judging chili cook-offs. The only difference was we gave each one we tasted a score between 1 and 10 because we were to judge each entry on its own merit and not compare one to another.

It's a lot of fun judging these events.

I don't think I could handle judging a salsa competition - I can't handle heat! Sounds like fun though.

I loved your hark work in this community,I don´t know if you are into Poker Online, I created this post to see if there is anyone that can give me a hand, cause I got a free poker money bonus on http://www.english.pokersemdeposito.com/ for Riva Poker the thing is I do not know where to begin ! No limit or Fixed Limit? wath should I Play and wath stakes?Cause Ido not understand much Pokerstrategy!

Congartulations on your web site

How fun that must have been :)

How much fun this must have been! I love hot and spicy, so I'd make a great judge.

when i first read the headline,i thought it s a salsa dance competition , and i m going salsa lessons but no man to practise later :))) while your post was opening , i was thinking that LOL..
after i saw it s Salsa:) i dont think i d handle to taste salsa salsa too much and judge.. :)

1. I also thought you were talking about judging a salsa DANCING competition

Hi Jason, it's' me, Lauren, your fellow guest post blogger for Pam's blog. I was curious what day you were going to post on her blog and I would space mine out accordingly. Let me know what you think! Excited to join you in this joyous blogging occasion!

You can email me or visit my blog. either way is fine. lauren.zabaneh@gmail.com or www.foodiehouse.blogspot.com

P.s. what fun to be a judge in a food competition! I think I would be a bit of a wimp when it comes to salsa, but as long as you have a beer...what the heck! looks like a great time!