The History of Team Survivors Rule! 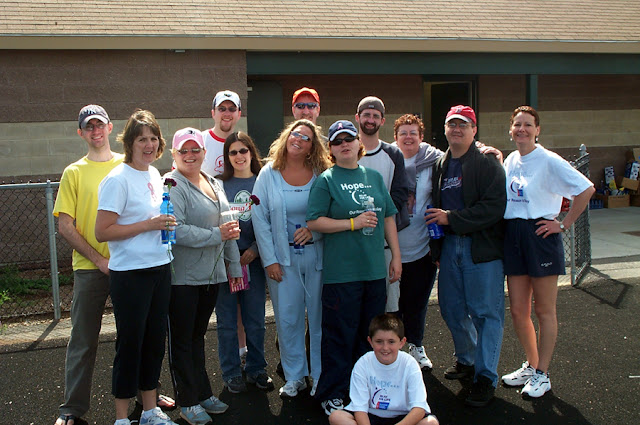 
This is the second part in a series about what my experience with cancer has helped me find in my own life, and how it has given me an opportunity to fight back. You can read part 1 and the beginning of the story in Second Chances, Giving Back and How You Can Help.

In 2003 I took my first walk as a cancer survivor participating in the Boston Prostate Cancer walk. As my wife and I researched this and other events we noticed that many likeminded people formed teams with catchy names. Most of the teams raised money all year and participated in charity walks or runs in their local communities. Lets do that! We started team “Survivors Rule!”. I was a newly minted cancer survivor and to me this name had power, positivity and a no-nonsense appeal. 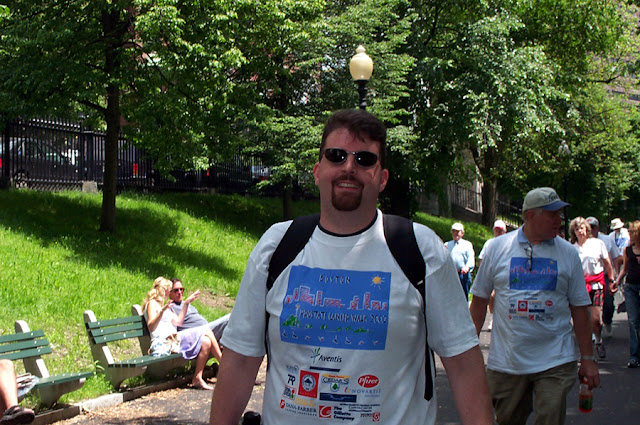 And we got right to work. Team Survivors Rule! finished 2003 with a homemade apple pie drive to benefit the Lance Armstrong Foundation. Margot and I also participated in the Making Strides Against Breast Cancer events in both Boston, MA and Manchester, NH.  We were off to a roaring start. 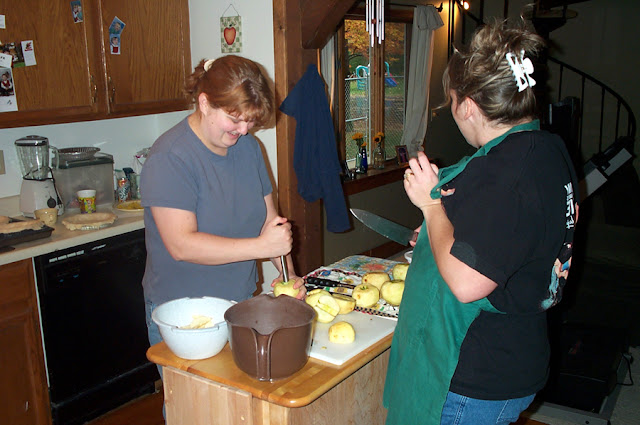 At the Making Strides event in Manchester, NH I met the volunteer chairperson (Nicole Spaur) for the 2004 Manchester Relay For Life. I had heard of this event before, but never participated in one. During the long week of recovery from my initial surgery my mother had mentioned this event (thanks Mom!) and we talked about finding one to get involved in. With recovery ahead of me still, we decided 2004 would be a good year to organize a team and Relay for the first time. As I talked to Nicole about Relay I was energized. She asked if I was interested in joining the committee. Blinded by my desire to make my experience mean something more I said yes. I went home and proudly told Margot that she was talking to the new chairperson of the Survivorship Committee of the Manchester Relay For Life. Her initial reaction took the wind of out my fight-back sails, but she was right; I had likely gotten ahead of myself. As we headed into 2004 I tried my best to balance my time between work, home, chairperson duties and getting our team organized for the Relay. In the end it all came together, and despite all the hard work I felt good. As I said in part 1, my cancer diagnosis changed my life. When I walked in that first Relay For Life, my life changed again. I walked all night with my father, Margot, friends and all the new people I met walking around in those circles. To top that all off Survivors Rule! had raised just shy of $5000 in our first Relay. This was just the beginning. 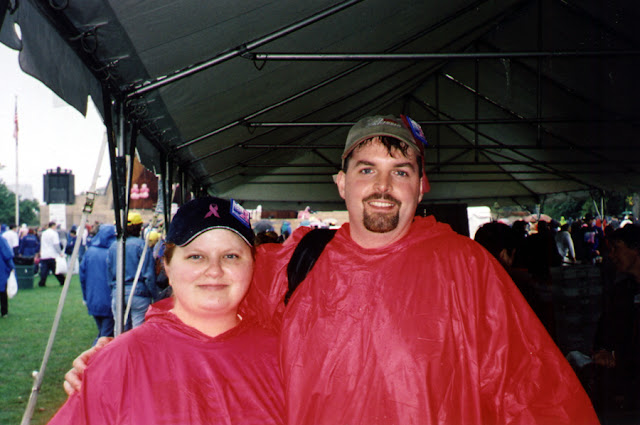 Later in 2004 the team made apple pies again, and Margot and I helped with day-of logistics and walked in the Making Strides event in Manchester. After two years the team was able to proudly proclaim that we had helped raised just over $8000 in the fight against cancer. We were building and growing, getting stronger and arming ourselves. Cancer was in the bullseye.

In 2005 the team needed to make a change. Due to a family wedding we needed to participate in a different Relay, and the change brought us closer to home, to the Relay For Life of Great Derry & Londonderry. As 2005 wound up the team made chocolate treats to sell, and pounded the pavement for donations. We rocked our new Relay all night raised over $7,000 more in the fight against cancer. The team again came out for a pie drive in the fall and the annual participation in Making Strides, which is still strong as it ever was. 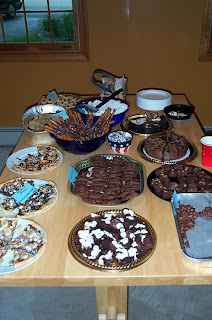 In the years of 2006 through 2009 the team put up remarkable efforts and raised over $10,000 in each of 3 out of 4 of those years. Our highest annual total was $12,500. Our success has always been bittersweet because we were fighting a disease that was taking our family and friends, but it is success and we enjoy it! My advocacy worked blossomed. I testified to the finance committee of the NH legislature on the importance of supporting cancer programs with tax dollars, helped with the event organization and marketing, and participated in several other advocacy events as a speaker. The team never made pies again after 2005, but continued to flirt with chocolate baskets, parties (on the right) and other treats. Spa days at a local spa were arranged with proceeds benefitting the Relay For Life. We also began using our homemade beverages to host socials to share the fight with others and solicit their support. Our team continued to grow and change. Unfortunately this was most often due to new cancer stories in our circle, but I’m always happy to go to war with these people, knowing them makes the effort worth it.

One of the other things I should just get out of the way is that I walk at Relay, and I walk a lot. My average mileage since 2004 is over 25 miles per event, and generally more if I help with day-of setup of both the greater event and for my own team. 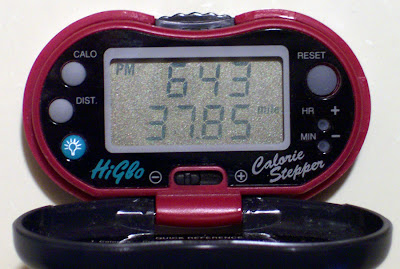 During the first few years after my treatment I learned a lot about the emotional side to cancer's effects on people and families. So many stories were shared with me. I was the “cancer guy” for friends, co-workers and strangers. I had chosen to educate myself on what we were up against and use that knowledge to fight back. It was hard to hear so many heart breaking stories, especially early on. A large measure of mental toughness had to be developed. That toughness came with heightened emotions all around, especially to the particular issue of cancer. Most people don’t know that cancer kills 1500 American’s every day. No one other disease does that. How many families is that? How many friends? How many jobs in our economy? How many voters, volunteers and fundraisers is that? You’d get torn up over this like I do if you thought about it too long. 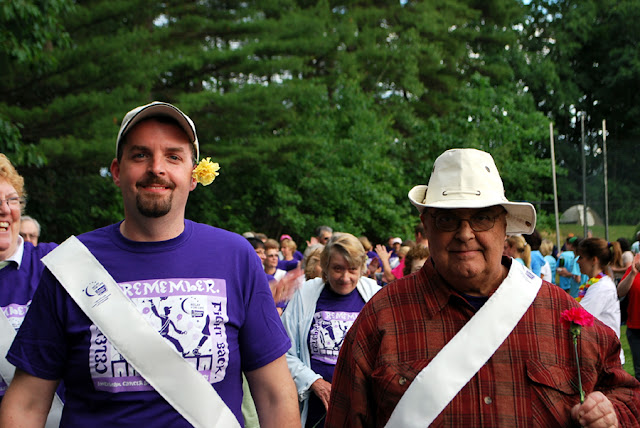 ( I met a lot of fellow cancer survivors who I became friends with. Thank you for being my friend Gerry!)

To many people knowing the “cancer guy” was just the relationship they needed to have because they were dealing with cancer in their own circle. The most powerful thing I learned was that it isn’t understanding that we should seek, although between survivors and caregivers there is plenty of potential for that, it is celebrating the shared moment. It’s me being able to tell you my story in my own words. As the American Cancer Society so beautifully puts it, it’s about more birthdays. It’s about being seen and seeing others again. It’s about living with dignity and hope.  I can’t necessarily understand what someone else has been through, but anyone can understand the need to cherish what you have. Like any medical condition, cancer is nasty physically, emotionally and can take a huge toll on everyone involved. Fighting back in the way we do ensures people affected by cancer are given hope and the chance to live with dignity. With our collective support more people are living longer and suffering less.  I cherish my second chance and through my advocacy work with the American Cancer Society I have now become a shepherd for others who want to fight back.

Wine tastings have become our flagship fundraising event and we are honored to have family and friends who volunteer top open their homes to host these events. Sharing my homemade wines, wine travel stories and wine enjoyment tips for an afternoon is a very enjoyable backdrop for some advocacy and fundraising work. And our guests love the tastings!

We two tastings planned this spring and one of them will be splitting its donations between two different Relay For Life events! The work of team Survivors Rule! has been infectious and led to family and friends participating in and working as organizers of Relay events in their own communities. That is making a difference! If you are interested in either event send email to jasonphelps (at) yahoo (dot) com for more information. I will be posting about fighting cancer with wine this year’s events in May after I have pictures to share from each. 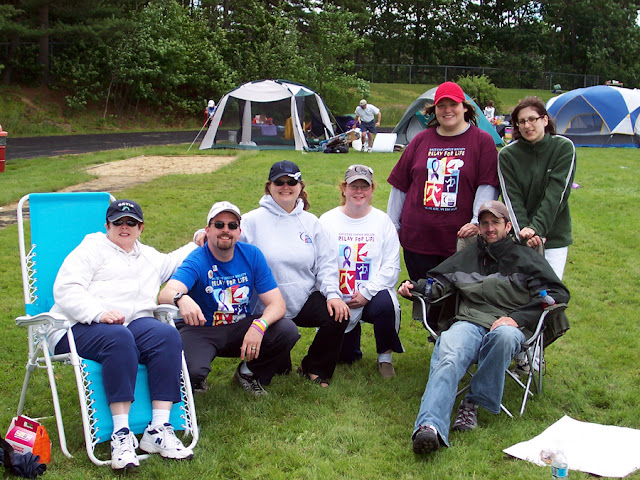 In the last couple of year’s team members have used a variety of methods to reach out into the circle of influence and solicit support. Personal stories are the best way to share the reality of the fight with others. The programs and services of the American Cancer Society are an excellent way to make a personal story stick, we tell people where their money goes. Look for details on the mission of the American Cancer Society and how Relay is part of that mission in an upcoming post.  Our goal now is to continue to grow our success and reach for that $100,000 mark. Funds of that size are comparable to the size of recent grants given to researchers at Dartmouth and other facilities in NH. Think about that, you can then understand the magnitude of how that money, your money, in the right hands could lead to big steps in this fight. We are all making a difference and we know it

I’ve personally taken to challenging donors with a matching donation. It’s no surprise that I put my money where my mouth is (actually, it is a surprise to some people) and donate several thousand dollars to Relay and Strides annually. Early in the fundraising year, which is right now, I offer to match all or a portion of donations in an attempt to further raise awareness and multiply the impact of people’s dollars.

Here’s the new challenge. I will match half of every $50 donation made between today (4/6/2012) and one week from now. The link to donate is below. You must leave a comment here letting me know you have taken my challenge and made your donation. That ensures I count it and allows me to recognize and thank everyone for sharing in my story and standing with me to fight back. A donation of $50 might be large for some, but there is a trick, ask your family and friends to pool donations. Get everyone involved. Maybe you get enough for two $50 donations which means I have to match it with $50! Your support will ensure programs and services are there for people who need them. You will be offering hope and dignity to others in a time of need. You will be someone’s hero.

Here is the link to make the donation online. Will you be someone’s hero today? The site is secure and run by the American Cancer Society who will issue each donor a receipt. Don’t forget the matching challenge and coming back here to tell me to open up my wallet and match your move!