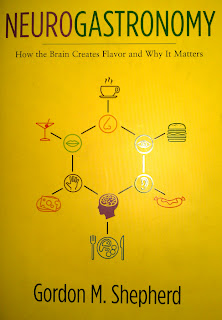 Follow your nose. Learn using your nose. Let your nose participate in sensory fusion with the rest of your senses. Aside from the obvious neurology, physiology and chemistry underlying the themes of the work described in Neurogastronomy: How The Brain Creates Flavor and Why It Matters, author Gordon Shephard makes the conclusions tangible in everyday terms. Synthesia, a type of literal sensory fusion, is defined in Chapter 13 using the analogy of someone declaring that a sweet taste, tastes blue. Got it.

I’ve written several times (1, 2, 3, 4) about techniques people could use to create sensory pictures of wine aromas and flavors for themselves. Simply put, experience is key. Any technique that focuses primarily on direct sensory exposure will, when applied in equal measure, consistently trump all other methods. Why do I think that?

One of the things I found most interesting about the olfactory system is what was covered on page 103 in Chapter 11 of Neurogastronomy. The idea that the olfactory cortex (the part of the brain the initially processes smell) is memory based, yes you read that correctly, is summarized in six points, which I will further summarize as:
My initial thoughts were the following:

I see the emphasis of effort on changes in smell as transition, and the system consistently trying to reconcile changes with the known and the different combinations that triggers in one’s memory. Accepting that there are some key physiological and neurological differences in how the olfactory system information is processed versus other sensory information, the adaptations make me think humans underrate their sense of smell and can evolve the sense considerably. With practice these natural adaptations in our own bodies can lead to remarkable experiences. The third point is striking in the acuteness with which memory can be tuned using the nose. When you add that not only can you expect to pick out olfactory compositions better, but the individual parts or solos better as well, it is hard not to consider what more experience can do. Brought together, and it does come together but I’ll save some for another post, the overall sensory experience of smell, taste and flavor has immense emotional implications.

The conclusion is that if you want to have a more refined palate and improve your senses for wine the best way is to get out and taste lots of everything!

One of the basic foundations in the book is the concept of retronasal smell, and simply stated it means you actually have to eat and drink stuff for the complete experience. The interaction of the food or beverage at the back of the mouth and aromas back up into the nasal cavity is the function involved here. Specifically for wine industry professionals this is a challenge. You can fashion a tasting method that incorporates retronasal smell by making sure you exhale over wine in the mouth without swallowing it, but to me it is more straightforward to take small sips and swallow at least one to fill in the sensory blanks that spitting creates. All day tasting might not be possible that way, but the solution is out there. 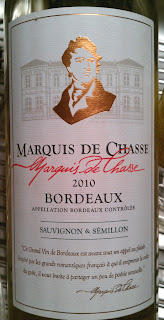 I followed my nose tonight. I saw a review last week for white Bordeaux. I can’t even tell you what the label was, and I don’t remember what magazine the review was in. But, it came back to me tonight and I grabbed a bottle that I had recently purchased off the rack to try. I’ve had white Bordeaux all of ten times in my life so I couldn’t really say off the top of my head what it should smell and taste like. But I knew if I opened a bottle and gave my initial impressions some attention I could improve the chances that I would be able to identify it in the future. I also know that young, simple white Bordeaux isn’t the same as exceptional and aged versions. Therefore, I am improving the chances that I will be able to identify young, straightforward white Bordeaux in the future.

The prior sentence was an attempt at humor. Sorry, I’ll get back to the program. And because I was following my nose I used my phone camera for the pictures. They suck, but that isn’t why you are here, seriously, I know this.

I opened a bottle of Marquis de Chasse 2010 Bordeaux. My first smell impressions of the wine were lime, grapefruit, citrus and herbs. In the mouth the wine has considerable acidity, a wet smooth stone minerality with lots of citrus, field greens and unripe pear. The vegetal qualities of this wine are there, but spread out very well. You’ve got the herbs in the nose, some bitter greens in the mouth and a touch of wet grass in the finish. It isn’t the most distinct combination in this young form, but I bet with aging the distinction would become more clear based on the percentage of Semillon, a grape not common to most wine regions.

I hit the web to remind myself about the history of white Bordeaux. It was clear that the number of times I had had it was a treat considering it is usually outnumbered 20 or more to 1 to white Burgundy across a large and varied group of restaurant wine lists. Typically a healthy blend of Sauvignon Blanc and Semillon, this wine should be dry, tart, projecting  fruit when young and a more nutty or dried fruit character later in life. Oak aging is common, but variations do exist. Graves is the one sub-region producing notable white Bordeaux wines.

What does this wine remind me of? Remember that smell processing is memory driven when this question is asked. Well, the lime narrows it for me to foods with a tropical spin and warm weather. The greens inspire more of a spring-time vibe for me and drew comparisons to Torrentes, South African white blends and of other wines from the Bordeaux region.

I’ll need more practice with the whites from Bordeaux, but at least I know that my practice will pay-off both short and long term. It is most sweet to know that you can enjoy a pursuit that will enable you to enjoy it more each day.

As someone who often gets a burst of visual memories from smell, even before discrete odors are identified, I find this topic fascinating. It is a common experience for me to put my nose in a glass, and see a memory of something like the field next to my grandparent's house, in late spring, and then realize that it is the memory of the many wild strawberry flowers there, that is being reactivated.

Humans may not have the same nasal data capacities as our house pets, but I also believe that regular folks (read - "not wine obsessed"), can get a lot more information from the shnoz than most are conditioned to. Quieting the frontal lobe, and focusing the attention goes a long way. Both senses, smell and taste, unlike the other three ( or four in some cases ;), require intake and integration of actual substances, rather than wavelength energy, so I feel there is a certain elevated intimacy with the conscious acquisition of 'data' through these channels.
Cheers.