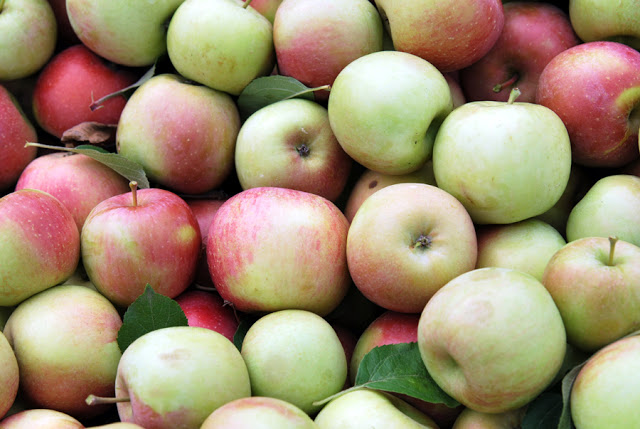 The apple tree is considered by some as the oldest cultivated tree in the world, but with its exact origins both unknown and hotly debated we can really only go so far back before what we know about how apples were grown and used gets pretty sketchy.  The flipside is that the hot debate confirms that apples were grown all over the Old World and migrated to New World locations with explorers and settlers. I led off with this because I wanted to the following statement to be as believable as possible. Where there are apples there is hard cider.

I will let the reader discover the numerous perspectives on the history of cider, some of which can be explored via the links below.
With the identification of the mysterious process of fermentation some eight to ten thousand years ago (Pasteur only documented the science in the mid 19th century), anything that had sugar in it was fair game to have been used to make drink. This includes fruits, honey, cereals (grains, rice) and other sources of sugar like cane. And apples weren't excluded. We don't have to travel forward in history too far to find the evidence that where there were apples there was cider.  SO, what else do you need to know?

There is a lot to know about cider both old and new. "But Jason what's the most important information to know about cider?" Well, that really depends on two things. First of, because cider is made all over the world, it is going to take time to experience enough of it firsthand to really worry about all the particulars. Second, and to me most important, is figuring out what you like. When seeking out and sampling ciders it pays to have a sense of how they work on your palate. And that is where the different style elements or characteristics come in to play.

Cider Characteristics
Regional cider traditions can be broadly classified in terms of the different characteristics , and here are some of the most common regional variations:
Cider is produced and consumed in quite a few other countries, but at smaller volumes than the countries/ regions listed above. We have to remember that where there are apples there is cider, but sometimes just not that much.

Cider at its simplest is the juice of crushed and pressed apples that is fermented with either ambient or cultured yeasts.

Apples must be prepared before they can be fermented and this involves crushing them, often called scratting, and then pressing the pomace to release the juice. The pressed juice is then transferred into barrels or tanks for primary fermentation. (The photo on the below on the right is from a brew club purchase of cider from 2011. I made a couple of nice ciders from the 20 gallons I purchased!) 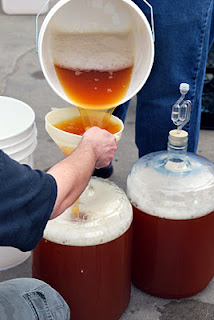 The primary fermentation proceeds until almost all the sugars are consumed by the yeast. At this point the nearly complete cider is racked (transferred) to clean vessels for the completion of the fermentation and aging. Typically ciders will complete fermentation in about 8-12 weeks and are ready to consume in the un-finished form shortly thereafter.

What happens next is very much a cider house choice. Some ciders are aged in old barrels for years, while some ciders are bottled and released young. As mentioned above some ciders have added flavors which may require additional fermentation and aging time as well filtration depending the type and texture of the added ingredients.

Bottling takes one of two paths, a Champagne-like secondary fermentation in the bottle (sometimes called charging or bottle conditioning) or the forced carbonation of sterile filtered ciders. Enclosures range from corks & cages (again like Champagne) to traditional crown caps used for beer. Bottle size ranges from 12 oz to 22oz or 750ml containers.

Cider is produced all over the United States and is also imported from other countries. Many of the domestic producers are small in scale and have limited distribution so unless they are local to you it is unlikely you will easily find their products. Cider is inherently a local beverage, and the best ones are made close to the apple source, making them hyper-local. There are several major domestic and imported brands that you should be familiar with. This brings me to a rule that I use to guide my beverage explorations. As a producer’s volume increases the number of human hours per ounce of beverage drops and if you experience this growth curve first-hand you will notice a point when the quality and character of their flagship products plateaus or even drops off. If you experience these products later in the producers’ evolution you may be underwhelmed. Looking back to their history might help contextualize these experiences for what they are. This isn’t a hard and fast rule and the threshold for different beverages and producers isn’t the same. For producers who have a diverse lineup of products, those that remain in small production might not suffer this fate.

How does the guidance above apply to cider? Well, the big brands have volume and distribute their product as far as they can to support that volume as well as future growth. Their products are worth trying and will help you understand the breadth of options available. That said, it is an absolute surety that well-made versions from local producers will be more interesting, more creative and elicit a much more joyful response from people who experience them. The major brands are viewed as a benchmark for the cider industry broadly, but only because much of the remaining production is made “under the radar” of the public at-large. Traditionally products may not bear any resemblance to the "big" commercial products, and we have to take care not to overlook them.

Major Brands You Should Know
Regional/Imported Brands You Might Find Nationwide
Local Brands You Should Seek Out
I have enjoyed ciders from all of the "local" producers immediately above and would highly recommend them. Finding them will most likely require a trip to the region of origin, but that is changing slowly.

Phew, that's a lot of information on cider. But I'm really just getting started. Tomorrow I will share information on three more topics including reviews from recent tastings, cider & food pairing and my experiences making cider at home.

Thanks for the great cider primer, Jason. This is a great resource to send folks to when they've got some questions about exploring craft cider.