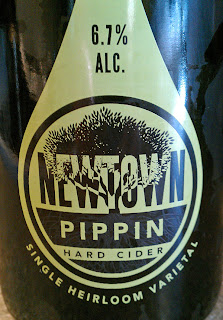 Last Wednesday night I had the honor of talking about cider as a guest for #winechat. Prior to the event I tasted through several styles to remind myself of the incredible diversity in cider-making traditions around the world.  I also wrote two posts (Cider Tales and More From The Orchard) on the topic of cider to help those unfamiliar with it learn more about a beverage that I both make and frequently enjoy.

One bottle I had on hand that didn't open was the Newtown Pippin from Original Sin. The Newtown Pippin apple has a great American story, originating in Long Island, NY and spreading to many locations including Virginia where both Thomas Jefferson and George Washington grew it. In modern times it is considered an heirloom apple variety and is largely used in cider-making, although it can be found at farm stands in the Eastern part of the United States. I've never actually eaten one, but have had it in cider form several times.

The Original Sin Newtown Pippin is a dry, sparkling cider that pours a light gold color. The aromas are tart apple, crab apple and apple blossom to me. In the mouth it is dry, but not bone dry, with very straightforward tart apple flavors. What I like about this cider is the balance. Dry, tart ciders can often create a sour sensation pretty quickly. This one is more gentle, not creating a big mouth pucker until late in the finish.

I've only been making wine for nine years and for the first several of those years I made small enough quantities that most of it was consumed within the first year of its life. More recently I've made wine in higher volumes as well as have branched off into other beverages (cider and mead) so more of my wine has been able to age.

I recently uncorked a bottle of a Cabernet blend (Cab Sauv & Ruby Cab) made in the Spring of 2008 from buckets of juice. The wine drank well early on and I had hoped it would age. It has aged and well enough to be drinkable, but it has not really improved at all with age; not that I expected it to. When I made this wine I still had minimal experience with the process, and the ingredients I used were good, but not the best out there.

The wine is drinkable on its own, but comes off a little sweet and a bit candy-ish. The candy / bubblegum nose is a dead give-away for methyl sorbate in homemade wine, a chemical byproduct from the use of Potassium Sorbate as a stabilizer, and potentially in a larger than necessary amount. Lesson learned. I've rarely come across this attribute in my wines so for this to be found in wines I made nearly 5 years ago shouldn't be a surprise. So what to do with the wine?

Cut it with Coca-Cola, add some ice and enjoy a wine cocktail!

Jason
Posted by Jason Phelps at 9:04 AM