Home-brewing Is Messy & Noisy But Is So Worth It! 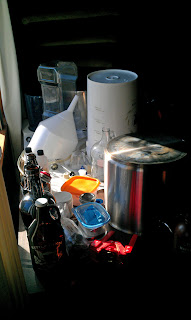 I've been home-brewing nearly ten years now and several things have been constant during my experience. The mess and the noise. I am going to cast these ideas specifically in terms of making beer,  something I am doing a lot of in 2013, but my experiences with making mead, cider and wine are very much the same.

Home-brewing is messy. I make more of a mess and spend more time cleaning up than I do actually brewing. I brew with extract, although I have switched to a partial mash technique and dry, versus liquid, extract in the last year or so. Dry malt extract is a funny substance. It is a fine powder so it kicks up dust pretty easily which means I usually end up with a small coating of it near my scale and vessel I am measuring into. Even a small amount of moisture, steam for example, turns the dry malt extract sticky, and if you don't get any excess wiped up quickly it dries and is oh so fun to clean up! 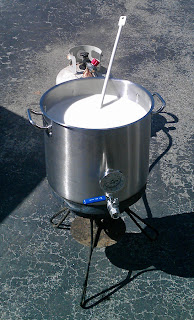 Wort, unfermented beer, is another messy character. Having blended water, malt & hops together this should be no surprise. Spilling wort in the wrong place can create a nice mess and having a boil over during the initial brewing can be a real pain to clean up. I watch my brewpot like a hawk and I haven't had a boil over in almost 3 years now. That last time I did have a boil over I had to wait until it dried so I could de-clog my burner. That was a huge buzz-kill on that brewday! I've never taken any pictures of these types of messes so I can't share the visual. If you've ever experienced it firsthand you know what I'm talking about!

Cleaning in general is the part of home-brewing that will always consume a huge amount of time. Equipment is cleaned & sanitized before you use it (the pic above is a table full of cleaned equipment) and then again afterwards before is it put away for the next brew session. That means lots of time at the sink, the application of several kinds of cleansers and sanitizers and a fair bit of both hot and cold water. My cleaning work always takes a toll on my hands and until the day is done I can't put anything on them because it would transfer to the equipment that I am trying to get or keep clean.

None of this is really a burden and I am not complaining about any of it, but a bit of honesty in pursuit of homemade beer can at least ensure folks new to the craft know what to expect. With experience you can mitigate the effects of the mess and manage the cleaning so that you can enjoy standing around the brewpot in the sun with a tasty homebrew.


Less of a labor-inducing issue but still constant is the cacophony of sounds released by home-brewing. Propane burners, boiling wort, air locks & blow-off tubes are just some of the sounds. For folks that use pumps and more sophisticated brewing rigs I bet there are other sounds I am not accustomed to from my low tech approach.

The last several high gravity (more sugar) beers I have made required a blow-off tube that was terminated in a pitcher of water. And boy did they make a racket! One of them is still going along albeit at a reduced pace from 10 days ago when it was brewed. I went down to the basement at one point and didn't initially know what the gentle pounding on the ceiling was. It was the CO2 being expelled into the pitcher from the fermenting beer on the floor above!

I took a short video of that recent brew on the second day of fermentation. If you watch closely you can see the bubbles being expelled into the pitcher, but with the sound on and the volume up you can also hear the noise it makes. Luckily you can really on hear it in the adjoining rooms on the same floor and as I mentioned from below in the basement.


Now that I've carried on a bit about some of the joyous challenges of home-brewing you might be wondering what I have been making and what is on the future brew schedule.

So far in 2013 I have made the following brews:
The Belgian Style Braggot and the last three above are still fermenting and/or aging.

Over the winter I also created three mini-batches of braggots (mead/ale hybrids) that also contained fruit or cider. All three have been bottled and two of the three have sampled well. My primary takeaway was that a light ale based braggot with fruit, like raspberries, is a nice beer; but the honey might not be best used in this way. The cider-based versions have a sour tinge to them, something that might not find a happy home in a broad audience. Interesting experiments nonetheless.

We are switching over to brewing lighter beers for Spring over the next month or so, which includes:
We are also going to need to fill our two new barrels again soon so we have a Russian Imperial Stout (our first ever) and a Smoky Chocolate Ale on the schedule for that purpose. 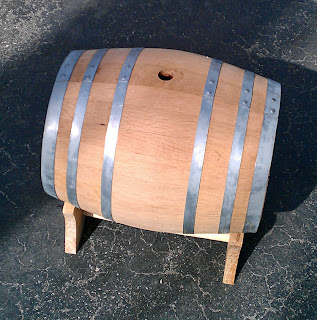 ( One of our one-used whiskey barrels from Balcone's Distillery in Texas. )

As you can see we are quite busy with the home-brewing right now!

All of the work is worth it, especially when you get to share your homebrew with friends. I usually forget all the hard work in between brewing sessions so I don't grow anxious about my next one.

Jason
Posted by Jason Phelps at 9:05 AM