This is actually last week's HFG, but shit happens. I also had a bottle of wine on deck to include this installment, but with allergy season in full swing my nose just wasn't gonna do it. And now I'm on to the next thing, so here it is! 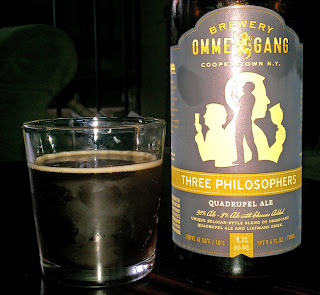 Three Philosophers is a Belgian Quad, a high ABV Belgian beer for which there is also a growing number of domestic examples worth drinking. The most recent release of Gravitation from Smuttynose caught my attention earlier this year and I've wondered how it compared to the offering from Ommegang.

Ommegang is known for their true-to-style Belgian beers as well as paving some new ground, and I can't say I have ever been disappointed with one of their beers. This Quad was not what I expected however, but in fairness there isn't anything wrong or off about it. It is just much drier than I expected. All of the aromatic and flavor notes are representative, dried fruits, dark sweet fruits, a breadiness and some spices. The alcohol is moderate at 9.7%, and is not a detractor. In the mouth it's all there, but it is very subtle because of the low residual sugar.

Having had a few homebrewed versions that are sweet and viscous I checked the BJCP Style Guide to see what the ranges in the different attribute categories might be. Category 18E, Belgian Dark Strong Ale is where a Quad could be classified. The alcohol is expected to be between 8 and 11% and the bitterness low. As for the sweetness, there are two sub-styles, Trappist & Abbey, that differ greatly in this aspect, while retaining considerable similarities otherwise. OK, glad I checked. The BJCP style guide is one of the ways I have been learning about beer styles and the two different versions (based on dryness) of Belgian Dark Strong Ales was something new to me!

At the end of the day this is a sweet style of beer for me, which is a good thing to know. I haven't ventured to make a Quad yet, but I do like Belgian beer so after trying a few more who knows!

Jason
Posted by Jason Phelps at 7:21 AM

I had this the other night as well! I've always been a big fan of Ommegang's offerings, though I found the alcohol to be a litle over powering on this one.