We regret to inform that the previously scheduled program will not be aired tonight. Margot might have Strep so our tour of the Marlborough wine region of New Zealand, its Pinot Noir and a tasty lamb dish paired with the wine has been rescheduled to next week. 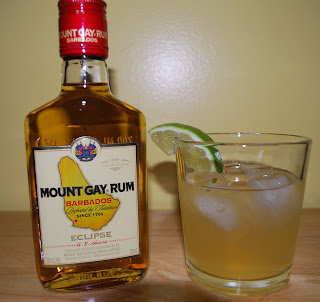 In it is place I have sown an ode to rum in the form of grog. Grog has a storied history starting with the British Royal Navy and all sorts of seafaring folk, including pirates, in the times of the colonization of the New World.

The following links provide a more in depth history than I could summarize here.

For the foodie, the beverage was most often concocted with water, rum, lime and spices. This form was devised specifically to ensure water wouldn't spoil on long voyages and that voyagers might consume some vitamins to fend of scurvy and the like.

The Contemplator's Short History of Grog

Add the cinnamon stick and allspice berries to the hot water. Allow to steep for 1 hour. Add the rum, lime juice and sugar. Mix well. Allow to cool to room temperature. Serve over ice in a rocks glass (way more classy than the pirates did, but hey!!) with a slice of lime.

Grog made using this recipe is a very light cocktail with a nice hit of spice and citrus. Margot thought it might be a perfect fit for a hot summer day. You could get drunk on it, but it would take a quantity and some time.

Arrrrr!!! Fetch me my grog wench!

I wish I could reach thru the internet and pick up that glass and sip away... Looks wonderful and I love learning the history!! I think you'll like the blackberry mint margarita I'm posting tomorrow morning. Remind Margot all the fruit in these drinks has to be good for her :-) Hope she feels better soon, Kate

Something tells me that your version of grog is a little more palatable than the British Navy version...Theresa

a little bit of your glass,please!cheers!:))

Nothing does a throat better than a good swig of hard liquor. Hoping Margot feels better soon. ;)

The drink sounds great...so sorry Margot is not well, best wishes for a speeding recovery.

Tell Margot I hope she is well soon, I know how painful strep is! That grog just may do the trick though.
-Gina-

Thanks for the wonderful comments. Margot is indeed feeling better, but the elixir of choice was a rum-based hot toddy.

Mix and serve. It it soothing and hot which definitely helps with a cold.

Good to see your MxMo post above, and almost as good to see some more pirate cocktail blogging in advance of International Talk Like a Pirate Day!
Arrrr.
I'm wondering if what you've got here (besides looking delicious) isn't some Bumbo, rather than straight Grog. (Here's my Bumbo post from last year's ITLAPD: ITLAPD: Bumbo
Ahoy, me hearty!