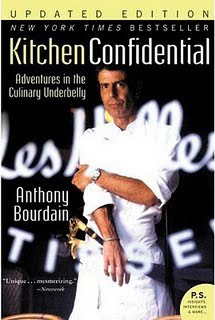 In May of 2000 when Kitchen Confidential was published I did not know of Anthony Bourdain. I have come to know him through his show No Reservations (the book is also on my reading list) and found that I enjoy his mélange of food, culture, personal stories and intellectual meanderings in each episode. No matter what you think of Anthony Bourdain I will make one simple assertion, he is real.

In a recent interview I saw with him he went back and thought about who he was and what his life was like during the times chronicled in the book. He claims it wasn’t pretty and assures the audience that he was perpetually one step away from disaster. I wanted to know more.

Kitchen Confidential is a moderately quick read, broken down into sections like a good multi-course meal. While not strictly chronological, it does flow largely in that direction allowing the reader to get a good idea about where the personality comes from.

Before I read the book I took a shot at what I expected my premise of the review to be. A wild story about the expansion of his personality from all of his real-life adventures. I believed that through all of it he was still that hot headed, addiction-prone, life on the edge guy, but with more appreciation of how to pull it all off with grace, skill and class.

The other theme which is taken literally from the book’s title and notes is a picture of what really goes on in restaurant kitchens around the world. I don’t actually think that story is all that surprising, or it shouldn’t be. Office buildings are also full of real people with sordid stories, e.g. sex, drugs, failure and all that. Kitchens can’t really be that different.

Bourdain makes it clear that restaurant kitchens are as much about people as they are about food. The necessary skills of the people who make up a good and real kitchen staff are explained to be varied and include, working long hours away from family, the ability to give and take shit from everyone, a fondness for booze and drugs, the desire to share details of one’s life well beyond “too much information”, a low threshold for pain, uber multi-tasking and finally an air of unpredictability in every waking moment. Artistry with food or refined culinary skills aren’t the primary focus of the characters in the book, although many do have culinary passions and are really good at what they do. Just not in that celebrity chef sense. These are real chefs, cooks, service and cleaning staff; the ones who actually do all the dirty work to get restaurant meals on to tables. In the end Bourdain paints himself as the ring-leader of a merry bunch of misfits who wouldn’t be pegged by anyone to be doing what they do.

Along the way he makes specific mentions of how much he had to learn about the people themselves, their cultures and their lives in order for him to be able to make use of their talents. Knowing what one particular person sounds like after a notable weekend bender, or how much money a line cook makes on the side selling dope to the staff or even which cultures accept jokes about sex with their mother don’t really seem like the things we would think of for an chef to worry about. But that is real life and why the stories were so fun to read. He does reflect on these teachings and how it helped him appreciate and deal with many things that would serve to frustrate most of us in his position.

There are also some nice tips for the restaurant patron to consider, like not ordering fish on Monday as it is likely the dregs from the prior week. It is also noted that specials are often the vehicle to get rid of things hanging around rather than use some unexpected ingredients. Again I don’t see any surprises here. Restaurants are businesses and many of them have to be concerned with the bottom line rather than haute cuisine and absolute freshness.

With this book in the bag I am very much looking forward to No Reservations picking up the trail of more stories from Anthony Bourdain.

I've been hearing a lot about him, but I haven't read either book. Have to check it out.

I love love love Anthony Bourdain. I love his voice in his writing and his realness. I really enjoyed Kitchen Confidential. I think it's great that he shows what life in the kitchen is really like--how it's not often as rosy as they make it seem on TV. He's spot on wit his descriptions. You summed up the book really nicely!

When I was in culinary school he actually came and did a Q & A. I knew who he was but not well enough to recognize his name. I said, who's that? and didn't go. The next day, when I realized it was him I was kicking myself!