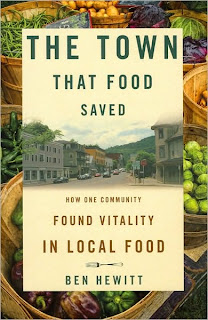 It is due to our adventures in being a member of our local CSA that I have opened a door into the local food movement. Jay and I originally did not join the CSA to be a part of any type of movement; we just knew we loved fresh vegetables. As I went to the CSA pick up site week to week I realized that there is indeed a whole community out there that is dedicated to growing, eating and spreading the word about local food. It was around the beginning of our adventure that I heard of Ben Hewitt’s book “The Town that Food Saved: How One Community Found Vitality in Local Food”.

Hewitt’s book tells us about the Town of Hardwick Vermont. Once a thriving granite mining town Hardwick had fallen on some hard times and for any other town this may have been an issue but the people of Hardwick are a tough breed and they have taken it well. Though the town was not overly prosperous the people were not unhappy with their rural northern Vermont way of life. Like in most rural areas Hardwick (and the surrounding area) is a place where everyone knows everyone and sharing with and helping out a neighbor is common place. There may not have been a lot to go around but the community takes pride in caring for their own.

As a local resident, Gourmet Magazine writer Hewitt brings a nice perspective to the story of how a handful of residents are getting a lot of press coverage for their “agripreneurial” enterprises. These enterprises are varied: cheese, vegetables, seeds, composting and soy among them and Hewitt does a great job at explaining how this group of locals is working together to their mutual benefit. Where the conflict comes from (and you know there needed to be one) is from another group of locals that feel they are being marginalized by these few, even though they have been invited to join them. Many of the objectors take issue with the fact that the media is presenting the Hardwick local food movement as new, when in reality the idea of a local food system has been there for years, it just has not been publicized or done for profit. As a rural community the farmers have always depended on each other: to supplement what they have grown, to barter with, to help out as needed. What they see the agripreneurs doing is cashing in on what was already there.

As the author Hewitt does a good job of leading you through not only the friction amongst the residents but also into his thought process on why the local movement began, what it should do, and whether it can work. The economy and the recent food scare definitely drove a lot of the attention surrounding the food movement. When rice and other food items were scarce or extremely expensive during the recent gas price hikes many realized how fragile our cross country, cross world industrial agriculture framework really is. This has surely contributed to the increase in interest in local foods. But if a local, small producer based food system has items that are too expensive for many of the residents is it a success? Can the struggle between paying your local workers enough and making your product affordable ever be rectified? Is a local big operation any better then the industrial agriculture model?

While in the midst of reading this book I listened to a piece on The Good and Bad of Localism that was presented on National Public Radio. One of the experts, John Carrol, explained that the goal of localism is to create food security, meaning the closer the food source is the more secure it is whether gas goes up or down, or if there is a national emergency. Carroll also expressed that the local food movement comes from a need for people to feel more connected to what they eat. I think that this is true and it is very much represented in the popularity and media coverage surrounding Hardwick, an area that is trying to make it happen.

To Hewitt’s credit he never tries to say he has the answers to the big questions surrounding the Hardwick local food movement. From reading the book I can see how difficult it is to come up with the answers but I can tell you what I think after reading this book and asking myself these questions:

There is no perfect solution and there probably never will be. I am not a fatalist, just a realist. With any venture there is always some give and take, push and pull. What I do believe is that feeling more connected to your food makes you feel good and better yet, tastes good. Yes local food can sometime be more expensive but if more people buy local there is a chance that the cost will go down. What the group in Hardwick is doing is well….nothing new…actually it is something old. The idea that a community can be self sufficient in many ways is what it was like for many centuries. You knew the farmer that raised the cow and the butcher that prepared it for your pan. You bought your vegetables from around the corner rather than across the globe. People lived, worked, went to school and shopped all right in their own town. Was that better? I don’t know, but I can tell you that unlike the perfectly red and blemish free, grocery store tomatoes, the ones I got in my CSA share were ugly as sin….but heavenly to eat. And any time getting back to the basics tastes that good, sign me up!

Margot
Posted by Jason Phelps at 6:46 AM

I just recently finished reading this book. And I, like you, came to the conclusion that there is no easy answer to the food crisis that I think the majority of the nation isn't even aware of. While I think the local food movement doesn't solve all of the problems, I do think it's the right track.

I just finished reading this book myself. I found it an interesting insight into a local food movement and I too liked that Hewitt didn't try to answer the big questions. Reading this book, Michael Pollan's and others we quickly learn the benefits of non-factory food and the dangers of our current agricultural system (hello, eggs)but the big question is can solely local food systems support everyone in the U.S. and elsewhere for that matter. I sure don't have the answer, but hope someone is trying to come up with it.

This is the second review of this book I have read in the past month. I guess I really need to read it. It's sounds like it presents multiple perspectives and food for thought. Thanks for the push

Sounds very interesting--I'll look for this one!