Cooking Out Of Your Comfort Zone 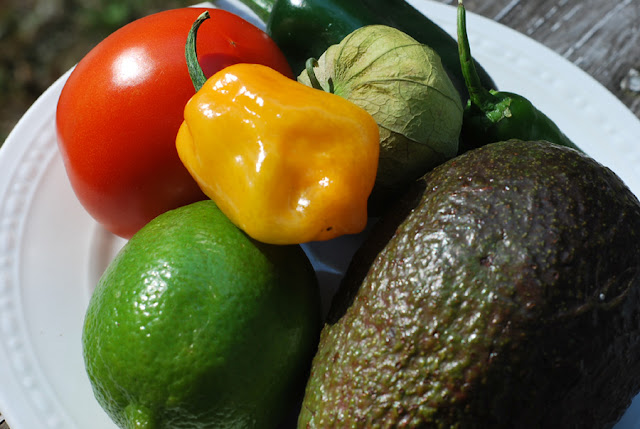 As I mentioned in my PFB Challenge #1 post, fresh ingredients
are the beginning of so many wonderful things.
When I started on the Project Food Blog journey I told my wife that no matter how far I got was going to complete the challenges as a way to gain new experiences and connect with others, Considering the clear ability for the popular Foodbuzz Featured Publishers to rally people around anything they do I didn’t expect much. I didn’t make it to round two, but the experience shared here was already in the bag and needed only a write up. Our dinner party for challenge #3 is already planned and will go ahead. We had intertwined some dishes from New Zealand with Pinot Noir from its Marlborough region as part of our Wine Region Project, so we have a lot to look forward to!

When I reviewed the details of PFB Challenge #2 my impression was that we were being asked to pick a cuisine that we had little to no first hand (cooking and maybe not eating either) experience with, which means we would be experimenting with new ingredients and techniques. I didn’t feel that something exotic, although that is subjective, was being called for, just something you couldn’t do with the proverbial one arm tied behind your back and your eyes shut. I picked a Mexican meal of tamales, salsa verde and honey cinnamon flan. I’ve never made tamales or flan before and don’t make Mexican food at home except an occasional taco here and there.

The first challenge was sourcing a few ingredients that aren’t typical in the grocery store here in New Hampshire, fresh tomatillos and banana leaves or dried corn husks to wrap the tamales. The tomatillos were found at a Latin grocery in downtown Manchester. No go on the corn husks or banana leaves. More lead time is likely needed to find those. We do have lots of fresh corn around which is what I used and made the process more difficult. I’m supposed to be challenging myself, right?

I knew only anecdotally that getting the tamale dough to the right texture is absolutely key and if not it would mean a sinking ship, literally. In my research I found that if your tamale dough floats in water you have reached the desired consistency and can proceed. What else you put inside the tamale can cover a broad range, but it was also apparent that whatever it is it should have some flavor, otherwise the tamales would be bland and in deep need of seasoning. I went with a roasted chicken marinated in lime, cilantro and tequila mixed with sauteed onions and garlic.

Research on flan indicated getting it right also comes down to the right texture through a combination of a good base and the right amount of cooking time. I have plating flair to consider with both this and the tamales and that not being a strong suit of mine sums up a nice challenge.

Here is what I came up with. The recipes can be found at the end. 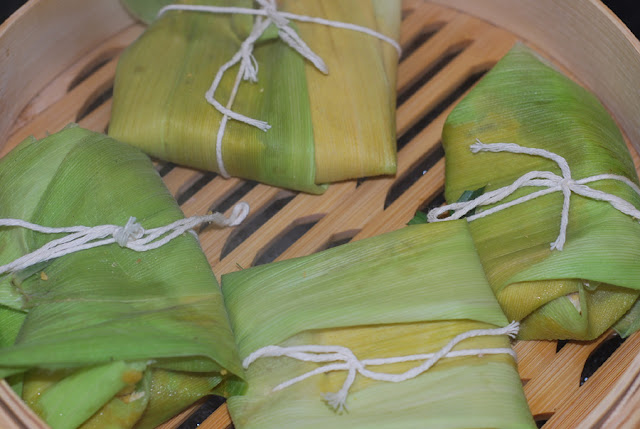 These tamales aren't pretty at all. I didn't take any pictures as I was building them. I was
too busy swearing at myself for not having the right stuff to work with. 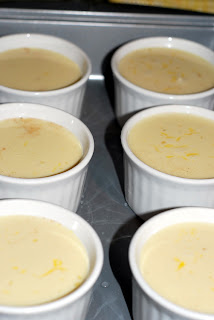 I was feeling pretty good here. I
would have beaten the egg a bit more
before I combined the ingredients. 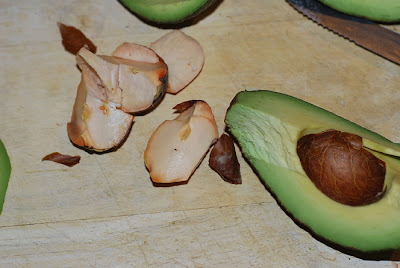 OK, so I thought I had gotten a reasonably ripe avocado. Wrong!
I was going to make a fan of avocado slices with some tomato
and corn garnish. It ended up being a salad of bit size chunks. 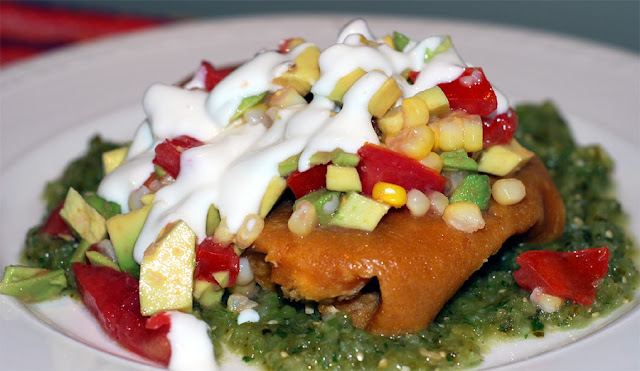 I have to say I am pretty happy with this. If you can taste it through the screen then my
work is done here. Pictures are getting better, one by one. 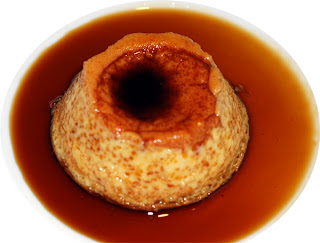 I cropped around the edges of a plate that I could not get clean.
Coffee liqueur is quite obvious on a white plate!!! Looks good though.
The taste in the tamales was excellent and I will definitely make these again so I can work on the technique of rolling them. I'll definitely use banana leaves which allows for a larger tamale and different types of filling. The salsa verde was pretty spicy so the cooling effect from the sour cream (it was thinned with some half & half) drizzled over the dish worked very well. The fresh tomato, avocado and corn salad added a nice texture for the combined bite.

The flan came out with a texture resembling creme brulee or custard so I believe I got it right. The speckling of it is something I have to look into. I didn't expect that and don't yet know what I did or didn't do that may have caused that. Next time I am going to try one big one. Getting that on to a plate will be a challenge!!

As we were cooking we eased our challenge fears with a tequila-based drink I found in the Bartender's Bible named the Poker Face.

Combine and stir in a rocks glass. Add ice and garnish with the lime.

Preheat oven to 350. Place chicken in a roasting pan and pour marinade over. Cover tightly with foil. Bake for 1 and ½ hours. Allow to cool. Cut the chicken off the bone, chop into small pieces and let rest at room temperature.

Saute the onion and garlic until beginning to brown. Combine with the chicken and set aside.

Mix lard and 1 ounce of broth with an electric mixer until fluffy. Mix masa, rice flour, baking powder and salt in another bowl. Continuing to use the hand mixer, add portions of the flour mixture, broth and chili/annatto tea to the lard until mixed well. When a small portion of the mixture floats in water it is mixed well enough to use.

Put both baskets of a bamboo steamer in a wok on high heat with water to the bottom of the steamer.

Place a smear of tamale dough on the short end of the several layered corn husks. Place 2-3 Tbsp of the chicken in at the center of the dough . Roll the tamale up in the corn husk and tie of with cotton string. (This is where technique really comes in to play and I don’t have it, yet!)

Preheat oven to 325. Combine 1/4 cup of honey and cinnamon to create glaze. Spoon glaze into bottoms only of 6 small ramekins. Combine remaining ingredients and mix until well combine but not frothy. Pour into ramekins. Place ramekins in a 13x9 cake pan and fill with 1 inch of boiling water. Bake in oven for 40 minutes or until knife into center of flans comes out clean. Allow to cool and then invert onto a plate and drizzle with coffee liqueur.
Posted by Jason Phelps at 7:51 AM

Kudos on a great meal there, Jason. You did a spectacular job on those tamales. I saw several friends (including you obviously!!) whose blogs I love who didn't make it to the 2nd round. I'm so glad you're going ahead and completing the challenges. It's going to be fun following you thru them. Hope you have a lovely weekend!! Kate

Those tamales look phenomenal! And now that I have slept a little bit more, I feel much better and could even go for one of those Poker Face concoctions!

It is so wonderful that PFB brought us together... and I'm so glad that you've gotten something out of it (even if you aren't moving on in the other challenges with us)

I can taste it through the screen Jason! And it tastes muy delicioso!
So sorry you didn't make it to the next round, love your attitude.
Blog ON!
LL

Great job on Tamales and a good choice for this challenge. I too have never made Tamales. You deserved to move forward. I voted for you. But I am glad to see you posted this anyway! That's sportsmanship. GREG

I'm sorry you didn't make it to the second round, I voted for you! I'm impressed that you are pressing on with the challenges. This looks and sounds like a great looking meal and I'd be very happy with a poker face or two :o)

I'm sorry to hear that! You had my vote! Those tamales sound amazing, and I'm very familiar with them, I make tamales every year for x-mas. Hope you have a great weekend!
-Gina-

Sorry you didn't move on, but kudos for taking on the next challenges to broaden your skills. Your tamales look fantastic!

Umm... yum! This looks great. So happy to find yet another local blog while going through this competition! I'm planning on doing my post for this week too... just probably not on deadline. It's a great learning experience :-) I'm so happy to make new "friends" in this process!

Are you sure you never done this before? They came out perfect!!

I voted for you! It is good that you went ahead with your Classic dish. It looks fantastic!

I find it interesting that out of all the cuisine in the world we both ended up making the same thing - tamales.
Good for you continuing with the challenges! I'm sorry that you still aren't in the competition though!

Jason, your meal looks great. Personally, I think the tamales really do look good, and I'm ultimately impressed that you made them. I never have, and don't think that I have the patience. The flan looks amazing and that tequila concoction is a definite must try!
Sorry you didn't make it to the next round, but I'm thrilled that you are going to keep going ahead anyway!

I really have to commend you for taking on this challenge.

I'm a native of Arizona, and here tamales are a Christmas tradition in the Latino community. Making tamales is a big undertaking, even for those cooks who are experienced tamale makers, as it's an all day event.

Tamales! I applaud you for taking those on! They look really good too!

Much thanks for all the supportive comments. I certainly didn't have enough context to know how good a job I did, and I'll be back at it again with what I learned in had.

I have also been enjoying the challege 2 posts from the competitors and look forward to seeing what the next round brings as well.

Hi Jason, I'm sorry you didn't make it through to the end of the challenge. However, I'm glad you are continuing on your own and I look forward to reading your posts.