We have a special post today from Karen Marely of Spice Sherpa just in time for International Talk Like A Pirate Day. 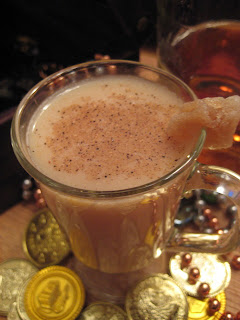 Yo-ho-ho and a bottle of rum! The romantic vision of pirates is filled with adventure, free spirits, treasure, and rogue personalities–all set against a backdrop of the Caribbean’s alluring waters. This is the fuel of National Talk Like a Pirate Day held every year on Sept. 19th.

Buried treasure, colorful speech, and freedom from the confines of civilization. Who doesn’t dream a little bit about that occasionally? After all, I think all food lovers and chefs have a bit of old-school pirate in their blood. Whether we define our treasure as fresh, local produce or an obscure ingredient; we follow our maps, relentless in our quests. In the kitchen we follow codes of conduct (the cookbook) or interpret recipes and our imagination to suit our own private escape.

Strange thing about stereotypes, they have a way of being grounded in reality. In the case of pirates, pillaging and plundering were standard activities during the Spice Wars of the late 1500s and early 1600s. Spices were the treasure of the time. Nutmeg in particular was worth its weight in gold…if not more.

In honor of National Talk Like A Pirate Day I concocted a drink that celebrates all that’s fun and sexy in pirateland. It’s filled with ginger syrup (from those Caribbean Islands), chai tea (spices from the Spice Islands), and of course…rum.

To be fair, I drank something like this at a bar called Lento about three years ago. I don’t quite remember all the ingredients but the drink was so delicious I dreamed about it for three years before finally doing something about it.

Here’s my version. I call it Rum Treasure. 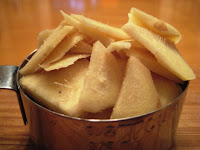 First, you need to make some ginger syrup.

1 cup of water
1 cup of white sugar
½ cup peeled and thinly sliced, fresh ginger root (and maybe a touch more if you want it stronger)

Combine the sugar and water in a sauce pan over medium heat. Heat until sugar is completely dissolved stirring occasionally.

Add the ginger and simmer for 15-20 minutes. Pour through a strainer into a container and let cool. 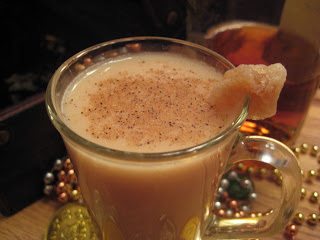 Combine tea, ginger syrup, and rum into your glass. The ginger syrup will settle on the bottom, as shown below, so take care to stir gently but thoroughly to combine the syrup. Add the cream. Combine gently. 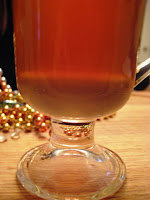 Make a small snip in a morsel of crystallized ginger and place it on the rim of the glass. Sprinkle a pinch of garam masala on the top.
Tip: I like to taste the spirits in my cocktails. Increase the tea to ½ cup if this mixture is too strong for your liking.
Another tip: You’ll have a ton of leftover ginger syrup. Add it to sparkling water for a non-alcoholic ginger beverage. Jason at Ancient Fire experimented with several different cocktails using ginger syrup last week, be sure and take a look other ways to use the tasty syrup.
For information on and uses for ginger click for more from Spice Sherpa.


Drink up me hearties! And if ye be lookin’ for recipes, stories ‘n’ folklore featuring spices found across the 7 seas, set your sails and point yer stern o’er to Spice Sherpa.
And yer cap’n asks what say you about all this fuss and poppycock o’er talkin’ like a bilge rat pirate (I be politely askin’ for yer comments)!
Posted by Jason Phelps at 7:29 AM

Ahoy, at first look, Matey... this is somethin' Me would skip o'er on the menu. Aye. But after readin' yer narrative I'm eager t' try.

My kids get exasperated when I talk like a pirate! Jack Sparrow is one of my favorite and he has so many good quotes! This will be a good day... savvy?

It's a gulp o' fun, 'tis the rum treasure! It actually goes down a little too easily so I make mine strong to help with the brakes. Enjoy your day--and thanks for chiming in!

And thanks to Jason for sharing his blog today!

Saw the post on Spice Sherpa and followed the link over here for the recipe. This is definitely one I need to try! Ancient Fire Wine looks like a cool site - I will definitely check out more blog posts here.

I should digg your article therefore more people are able to look at it, really useful, I had a hard time finding the results searching on the web, thanks.