If you've done any business networking at all you have likely been part of conversations about what makes corporate teams and small businesses successful. I've participated in my share of these conversations and over time I have determined that there are three things that make the difference between success and failure:
Having a really great and competitive product doesn’t hurt either, but that one isn’t always as straightforward to asses. 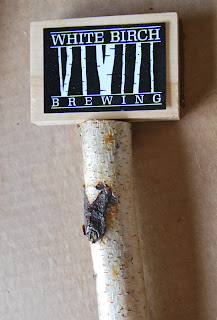 I've enjoyed the beers from White Birch Brewing in Hooksett, NH a number of times, but I had yet to visit the brewery and due to harried tasting situations hadn’t really had much interaction with the people behind the beer. That changed this a few weekends ago when Margot and I made a trip out to the brewery. Our timing was incredible, arriving on the first full day they were pouring and selling growlers!
I had already formed the opinion that White Birch had a great product so getting to meet the people behind the beers provided a wonderful opportunity to learn more. Listening to Bill, Dave and Scott talk about what they do and how things have changed in the two years since White Birch opened helped me better understand their success.
We started off with a couple of tastings including two brews that I had yet to have, the Tavern Ale and Camp Travis. The Tavern Ale is a smoky imperial brown ale that was inspired the loggerhead ale made at the Butter’ tavern in Concord back in the 18th century. You can find the full story at Tavern Ale page. The beer is rich and malty with a moderate smokiness that wanders away in the smooth finish.  Camp Travis is beer produced from the Apprentice Program, a unique learning opportunity offered by the brewery, and was the vision of Ben Martin who is the most recent apprentice. Ben chose an American Barley Wine for a style and in a bold move chose Sorachi Ace hops as the only hop to be used in the brew. The thing that struck me about this beer was the taste of dried fruits in the middle of each mouthful. Click to find out more about the Apprentice Program.
The rest of our time at the brewery was spent getting a behind the scenes tour. We took a lot of pictures and struggled to take in details on so many of the special projects going on. The 7 barrel system now in use was made by the company in the adjacent complex, redefining what it means to support local industry! 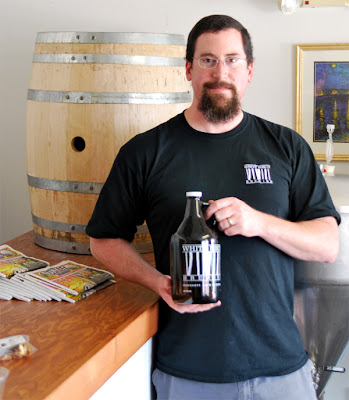 ( Bill admitted a dislike for having his picture taken so I was
very honored he agreed to. Proudly holding a growler and
standing next to a new barrel that will house a barely wine
for late 2011 release he surely looks the part! )

( This mash paddle was hand made by of the
apprentices. That is serious passion! ) 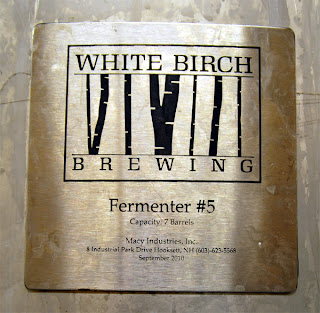 ( Custom made fermenters compliment the new brewing
setup also made by Macy Industries right next door. ) 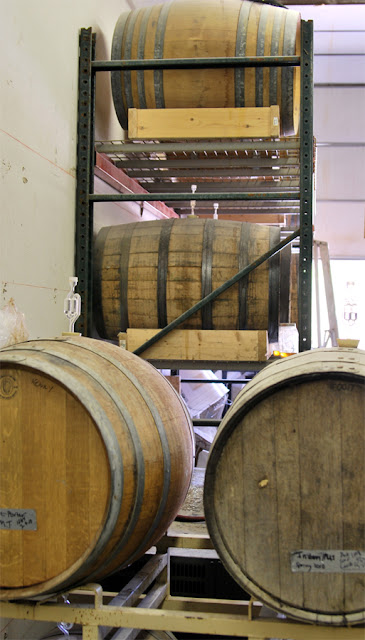 ( Ever the mad scientist, there are a barrels and carboys
with all sorts of special brews everywhere! ) 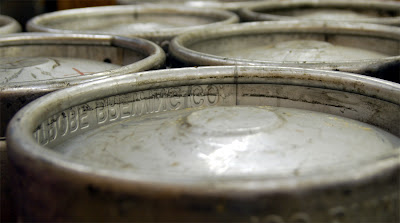 ( Kegs of several sizes awaited filling. There was much excitement
about several new accounts requesting kegs. I can't wait to order
a White Birch beer off the tap at a local bar. Best in NH! )
If you haven't had brews from White Birch yet I urge you to seek them out. For me they are the best beers being made in NH right now and never fail to make me smile.
White Birch is hosting the 2011 Southern New Hampshire Brewers Festival on July 23. Click the link for details and to purchase tickets.
Cheers!
Jason
Posted by Jason Phelps at 8:18 PM

Great article! Thanks for taking some time out to tour the brewery. The pictures are great too.