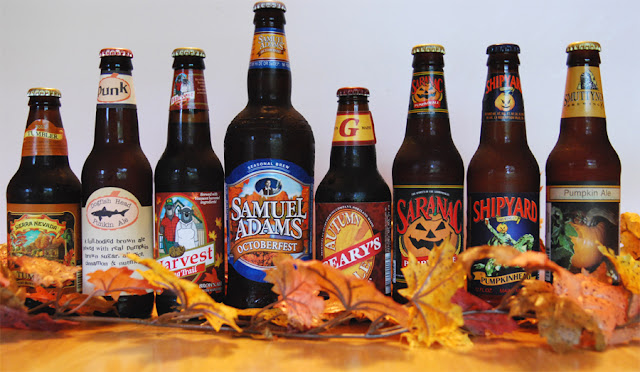 Seasonal beers are all the rage. So I am, along with Margot’s trusted beer sense, going to ride that wave a bit. For the autumn season we get all sorts of brown ales, spiced and pumpkin flavored beers, especially here in New England. I’ve never sampled more than one or two of the ones I have ever come across, and never given much thought to exactly what worked and what did in the annual crop of autumn warmers.

We are going to run sixteen Autumn, Oktoberfest and Pumpkin beers up against each other in two rounds. This is not scientific. We sourced the selections from our local craft beer shops by grabbing a single of every one that fit the style they had on hand. We didn’t hit the local brewpubs to sample the non-bottled offerings, and we didn’t seek out some of the nano-brewed versions that aren’t always in usual stores. Most of the beers are regional to us but we do have California, Delaware, Colorado and New York represented as well. You get what we are going to give you.

This is round one. Our method? Two tasting glasses each, two ounce pours. Taste two, clean the glasses and send the leftovers back to the fridge. Repeat.

We are going to pick two personal favorites and winners in each round, one autumn brown ale style and one pumpkin flavored. We hope something we taste and review finds its way into your fridge this fall!

And the round one winners were?

Shipyard Pumpkinhead and Geary’s Autumn Ale. Right up front, you note they both come from Maine. I’m not surprised, and even if they had been consciously separated into the two rounds I am betting they both would have still stood out. I’ve known Maine makes tasty beers for a few years now. Shipyard and Sebago are two sources I’ve enjoyed beers from repeatedly. I also have experience with Allagash (and everyone who loves good beer should), Sea Dog, Casco Bay, Gritty McDuff’s and the Inn on Peaks Island, all hailing from Maine. Check out the full reviews of the first eight beers below.

We started with this beer because this is the one I associate with my first tastes of beers crafted for this season. Unfortunately we were both underwhelmed by it. I’ve mentioned my frustration with some of Sam Adams’ beers before in my blog. I feel like they’ve lost their oomph over time. It is also fair to say my tastes have grown, something of a combination of both is the likely answer. I recall when I first had this beer I really wanted it long after it was out of rotation. They made a lot less of it then. Here are the hard facts nonetheless. Pours orange/gold to amber with a tan head that lingers. The nose is mildly malty, a bit hoppy and Margot said it smelled of wet hay. The maltiness is more evident when you drink it, although is a lighter in body than I expected. It finished short with a touch of dried fruit. From Massachusetts.

*** Note: after I published this article I came across the leftover bottle (capped) in the fridge since last Friday. Thinking it might have lost carbonation or be otherwise less than worthy I took a quick sip before assuming I had to dump it. Not so! This beer has improved with a little oxygen. I would not have expected this. While it wouldn't have changed the outcome of the tasting, it is notable, and something to potentially bear in mind about this beer.

I’ve sampled through the beers from Smuttynose over the last few years, generally enjoying everything I’ve had. The Pumpkin Ale pours an orange/gold color with a slight haze and an off-white creamy head. The nose is spiced pumpkin all the way. There is lots of carbonation. This beer is definitely hoppy, Margot wrote it twice in CAPS, and the nutmeg (we think) really kicks in on the finish. The finish is a bit acidic and the hops are represented there as well. I also picked up the meaty, fleshy quality that pumpkin can impart to a beer. This beer is well made and drinks as it you would expect it to. From New Hampshire.

This is a brown ale in the truest of senses. It pours brown with amber hues setting up a dark brown head that dissipates fast. The nose is huge and full of malt, fruit and caramel (thanks Margot!) aromas. In the mouth the malt character performs really well with a touch of smoke, nuts and a clean, pleasantly bitter finish. The boldness of the nose and mouth on this beer propelled it to the front of the pack. It is intense without being intrusive. You have to stop for a second when you hit one of these to make sure you know what you’ve got! From Maine.

This and the Sam Adams Octoberfest were the only beers of this bunch I had ever had before. My last tasting of the Pumpkinhead was with a spiced sugar rimmed glass, which while it makes for a great “beer cocktail” like experience, wouldn’t offer a proper review of the beer itself. No rimmed glasses this time. Pours gold with hints of orange. It is very light for a fall season beer, but keep reading. The head is very slight but when you get to the nose you starting paying attention. I said it smelled like a garden, and squash flowers, tomato leaves and ripening vegetables was where I was going with that. Raw pumpkin. The pumpkin, spices and a bit of baked pie crust come together in the mouth. The spices arrive a little late but stick around through the finish, which has some zip. Margot noted that she could drink quite a few of these. Gotta love a woman who can pick out a good beer! We bought extras of this so we could try the rimmed glass at home and otherwise enjoy them with the season. In hindsight, smart plan. From Maine.

Pours an amber color with a quick dissipating off-white head. The pumpkin is accessible in the nose but is restrained. There is a fleshy, vegetal character to the pumpkin aroma. The spice is again bounded and not huge, but was easily found. The finish was a tad bitter with some hops along for the ride. Margot stated, and I would agree, that the pumpkin flavor was not very pronounced and that this beer drank more like a standard red ale with an off-character nose.

Pours a dark amber color with a light brown head that lingers. The nose is nutty and a little toasted. It is medium bodied with some fall character (dry leaves, another Margot-ism) to it and a slightly hoppy finish. I have to say I would not have guessed this was a Sierra Nevada beer, it just isn’t bold enough. I have enjoyed everything from them I have ever had, but this one doesn’t fit. From California.

Pours a dark amber color with minimal head. Malty and nutty nose. A bit rooty & earthy as well.  Lots of carbonation. Low on the hops and the nut & dried fruit flavors come through in the mouth. Moderate, clean finish. This is a solid casual drinker for the season. Not huge, but put together well enough to drink. This is my Bud 30 pack beer of seasonal small-batch beers. I don’t drink cheap beer, instead try to find straightforward drinkable craft and small-batch brews that offer the same casual consumption scenario, but with character. I hope that comes across as a compliment, cause it is. From Vermont.

I’ve heard things about this beer but hadn’t had it until now. The rumors and the beer match for any who might have been concerned. Pours an amber/orange color with tan head that lingers for a bit. Smells like baked squash or the inside of a pumpkin (Margot, again) and toasted pumpkin seeds. The fleshy quality of the squash comes through in the mouth joined with some spices but not to an extent that it tastes like pumpkin pie. More like spiced, baked pumpkin. Makes for an interesting drink to be sure. From Delaware.

Thumbs Up / Thumbs Down

Overall this was an exciting first round. The round two tasting is tonight and the full results will be posted in a week. Never having surveyed this many beers from this category before I have to say it is worth a spin if you are interested in these types of beers. Expanding your view to include other beers, don’t forget the local keg-only ones, would definitely mean some additional cream would rise to the top.

Cheers and happy autumn drinking all!

Jason
Posted by Jason Phelps at 8:07 AM

Way cool! I'm a complete sucker for seasonal beers--love them! The autumn is the perfect time for those deeper spiced-out ales. Can't wait to see the results!