The 2011 Summer of Riesling is winding down, but I’m not quite finished yet! This week I paired the Chateau Ste. Michelle (CSM) 2009 Dry Riesling with a pan roasted Chilean Sea Bass for some late-summer magic.

Dry Rieslings are very versatile wines, pairing well with a wide range of flavors and textures. Without the sugar of their more casual drinking oriented peers these wines are easy partners with savory dishes that don’t go too heavy on sauces or earthy flavors. I wouldn’t try to put a dry Riesling up against a steak or pasta dishes with lots of red sauce, but I would go out on a limb with spices, white wine braises, salads and as I did this week, fish.

I had never had the Chateau Ste. Michelle Dry Riesling before opposed to being no stranger to their sweeter wines. The standard CSM off-dry Columbia Valley Riesling is the first wine that both my wife and I can remember drinking together who knows how many years ago! We visited CSM in 2010 during our extended trip out west for the WineMaker Magazine conference in Stevenson, WA. Moving beyond the Rieslings we found single vineyard gems like the Wahluke Slope Syrah and the Canoe Ridge Merlots, including the Ethos Reserve Merlot that really knocked my socks off. I’ve enjoyed both the Indian Wells Cabernet and Eroica Riesling several times, and highly recommend all of these wines if you want to see what CSM brings to the table as a winery. 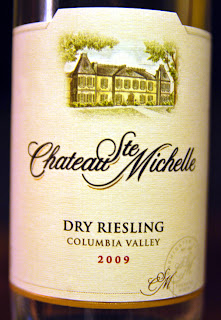 The wine pours a light gold color and brilliantly clear. It offers up peach and tropical notes in the nose, with a hint of petrol to round it out. In the mouth I picked up much more peach and citrus, with the citrus riding along for the finish. I did experience some sulfur aromatics during a few sips, but it wasn’t consistent. The wine is nearly dry with 0.76% residual sugar so just a touch of sweetness comes through if you focus on it.

Preparing Chilean Sea Bass at home was another first for me. This could also be the first time I have ever had it as well, but I can’t specifically remember whether I have had it or not, so I won’t make that claim.

The preparation of the fish was dreadfully simple. I started by slicing half of a white onion, half of a red pepper and thinly slicing two small garlic cloves.  I also preheated the oven to 450 degrees. The veggies were sautéed in an oil coated pan just until they began to wilt. I deglazed the pan with dry sherry and then added vegetable stock, salt and pepper, cooking it until it thickened. While the sauce thickened I heated a cast iron skillet over medium high heat with a tablespoon of oil until it just started to smoke. I salted and peppered the clean fish and placed it in the skilled skin side down for 4 minutes. After four minutes I flipped it, allowing it to sear for 1 minute longer. I then transferred it to the hot oven for about 2 minutes until the fish was a healthy golden brown. To serve the fish I placed half of the vegetable mixture on each of two plates, laying ½ of the fish on top of the vegetables. I light dusting of salt and pepper is all that was required to season it to taste. 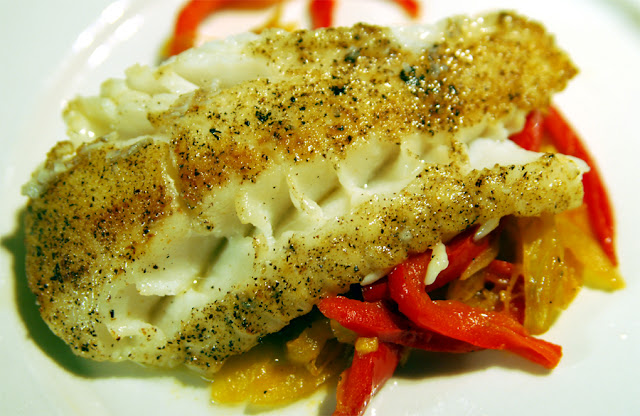 The fish melted in my mouth like butter and the nuance from the sherry and stock in the vegetables was a killer combination. The wine accented this dish with the fruit flavors and a touch of acid to make everything pop. I honestly believe this is one of the best food and wine pairings I have ever executed, one I will look forward to repeating and riffing on in time.

Next week brings the end of this ride for 2011, but not without some renewal . On Wednesday I am going to taste and share the Inniskillin Riesling Ice wine for my sweet finish. I’ve had this wine before and drool every time I think about having it again. On Thursday I am going to participate in the Riesling Hour virtual event which heralds the arrival of the 2010 vintage of Finger Lakes Riesling. Having just returned from the Finger Lakes I have several 2010 bottles to choose from when I go to raise my glass!

Your posts give me inspiration to break away from my usual. I haven't had riesling in ages but you make it sound so delightful and not the overly sweet wine of my memory.

Yummy recipe too. A keeper. Thanks.

Your posts make me break away from my usual wine selections. I haven't had a riesling in so long but this sound delightful! What a scrumptious recipe too. This is a keeper. I'd think the lightness of the fish allows a little experimentation with the spices and still be complimentary of the wine.

Thanks for the wonderful advice.