To say I’ve always been a supporter of local wine would be a bit misleading. My curiosity to find it where I’ve lived goes back about 10 years, but back then it was a novelty to me. I’ve been a supporter of local beer much longer and although I’ve always treated beer and wine as equals around my table it took some time for local wines to make consistent appearances. New England has culinary traditions that are known beyond the region, Boston Baked Beans anyone, and in more recent years a dining scene that regularly gets headlines to draw folks from elsewhere in. But, we aren’t known for our wine. 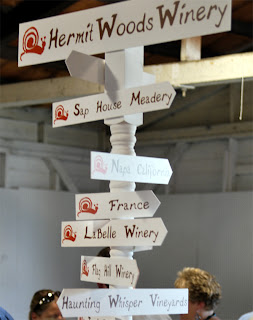 In 10 years I have greatly increased my interest in and knowledge of the local wine scene, checking out the products of all of the wineries in my home state of New Hampshire (with the exception of the very newest to which visits are in the works) and a smattering of wineries in Vermont, Connecticut and Massachusetts. As of this writing there are 23 wineries, cider houses and meadery’s in the state of New Hampshire.

When I first started looking for local wine I didn’t really know what to expect although I knew that vineyards didn’t dot our landscape like they do in parts of California. I came across wines made from local fruits, peaches, strawberries, apples, cranberries and blueberries, and wines made from grapes such as Chardonnay and Merlot, but also ones I had never heard of like Foch, and Vidal.

The fruit wines always did, and still do make sense to me. I’ve lived in New England all my life and love the different parts of the summer when local fruits are available at pick-your-own farms and the local farmstands. We might not have vineyards, but we sure do have plenty of local fruit. The wines made from these fruits reflect our agricultural capabilities, making them hyper-local and tightly connected to the people and the place from where they come. Wine snobs everywhere might turn up their nose, but at least we have a sense of place!

The wines made from grapes that I had never heard of, others like Diamond, Noiret, Leon Millot and Seyval, took some education to understand. Together these grapes are categorized as hybrid and native grapes. I am not a farmer, but I didn’t have to be to quickly recognize that our climate forces wine grape growers to seek varieties that are cold weather hardy and because of our seasons, flora and fauna, also disease and pest resistant. Vines in California and regions all around the world need these same attributes to varying degrees, but those areas offer growing conditions where the noble grapes do so well that these other grapes aren’t even considered. Areas along the New England coast and in the Southern regions have a lot more luck with growing Chardonnay and Cabernet grapes (and other vinifera), but not as easily and reliably as other regions, so the native and hybrid grapes still form the core for some wineries in those locations.

With only 3 AVA’s (American Viticultural Areas) in New England, Western Connecticut Highlands, Southern New England and its sub-region Martha’s Vineyard, there is not lot of wine that comes from specific designations in New England. Beyond these zones (and from within them as well) wines labeled as New England or carrying the name of a state must be made from grapes, fruit or juice grown in the region or likewise the state. Not all wineries can grow or locally source enough raw material to maintain their production and thus source grapes and juice from elsewhere. The Finger Lakes is one example of such a source, although juice is also imported from California and international purveyors. These wines must be labeled as American Wine, and are only then manufactured locally. The “localness” of such wines is debatable, but at least a few of the wineries that I know that started this way quickly moved to using estate grown or locally sourced grapes to brings things back to local. 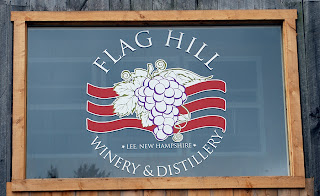 No post about local wine would be complete without a review. I am going to review the Flag Hill Raspberry Wine. Flag Hill Winery & Distillery is located in Lee, NH and is one of the oldest wineries in operation in the state of New Hampshire, opening commercially in 1996. Prior to 1996 it operated as a vineyard selling its harvested fruit to the New Hampshire Winery, which has since ceased operation. The property Flag Hill is located on has been the site of a family farm going back to the 1950’s and in 2004 114 acres of it were designated as conservation land with support from the Land and Community Heritage Program.

I could smell the raspberries as soon as I popped the cork. The wine pours a deep red color with a slight purple shift and is clear, much like a Beaujolais Nouveau or Pinot Noir. The wine is spot on for raspberry, and is not sweet, although there is enough residual sweetness to balance the natural acidity of the fruit. The finish is clean and is berries all the way. This wine would be a perfect aperitivo before a meal because the acidity is palate cleansing and makes the mouth water. 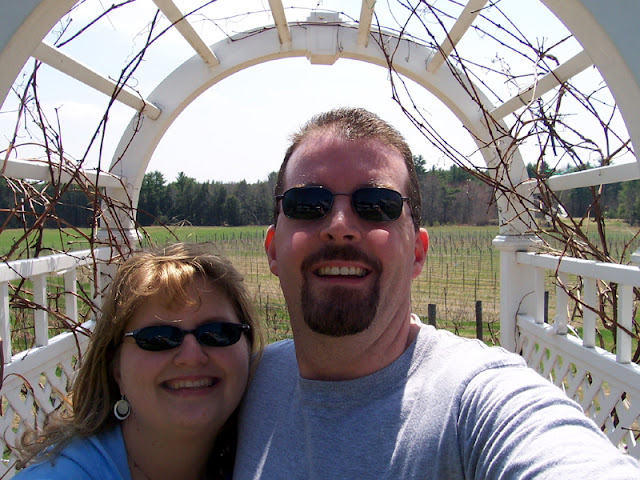 ( Self-portrait in the arbor used for weddings at Flag Hill. From 2007 )

Wine from Flag Hill is the first New Hampshire wine I ever had. Their wines are consistently of high quality, made from local fruits and estate grown hybrid and native grapes. Margot and I have visited Flag Hill several times to taste, including a local vacation for our 10th wedding anniversary in 2007, and more recently as the site of the first annual LiveFree & Wine New Hampshire wine festival in 2010. You can check out how it grew from our Live Free & Wine 2011 post. 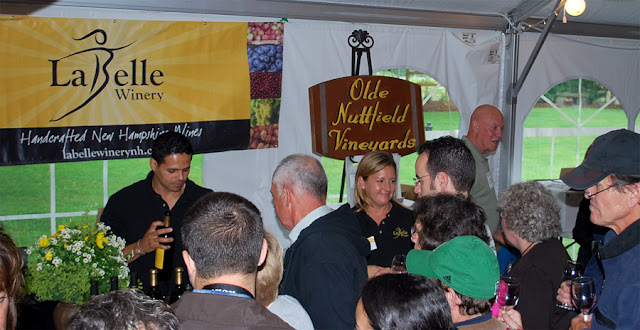 Next Month the wine lovers at DrinkLocalWine.com will be hosting Drink Local Wine Week from October the 9th through the 15th. Not wanting to miss an opportunity to support and promote the wines of New England, I of course have plans.

The first event will be an All-New England wine tasting with 20+ bottles of commercial wines from wineries of all the New England states. Friends of ours who authored the book “The Next Harvest” about New England wineries will be joining us and others at our home to see what the region is offering in 2011. During the research for their book Chris and Nancy Obert visited many wineries and sourced quite a bit of New England wine. They conducted tastings of their own, we sadly didn’t know them then, and are big supporters of the local wine scene. I look forward to the conversations the more recent vintages will generate. We will have wines made from fruits, hybrid & noble grapes, and wines from both longstanding and new wineries to try. A full article with pictures, reviews and feedback will be posted the week following the tasting. 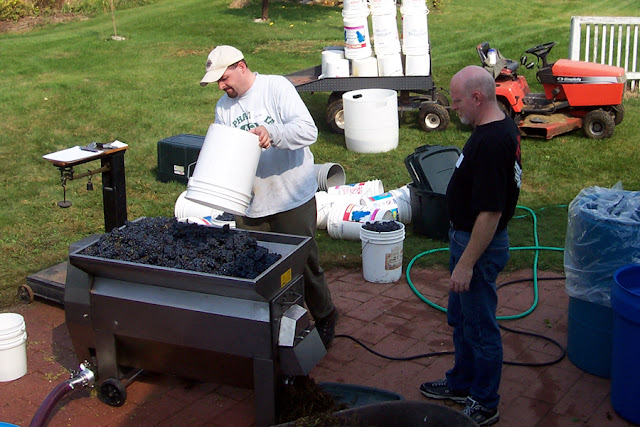 ( That's me dumping the Marechal Foch into the Crusher/Destemmer at Candia Vineyards. )

My second local wine activity will be working the harvest at Flag Hill. I’ve worked harvest at Candia Vineyards in the past and enjoyed working with the grapes firsthand, knowing that just a little bit of my love of wine would be in the bottles a year later. Flag Hill has a series of harvest parties annually, something that seems to grow each year. Volunteers pick early in the day and finish with a social where grapes are crushed the old fashioned way to make a celebratory harvest wine that is served at the same event the following year. I will share my experience and photos during Drink Local Wine Week.

I hope you enjoyed this spot on the local wine scene I have come to enjoy in New England. I am very much looking forward to the upcoming tasting, the first for me where all the New England states will be represented, where I hope to get a much better idea of whether a local drinking culture is emerging where I live.

Right on man. Nice job, and I appreciate how the explorartion of the local can be enjoyed in parallel with wider wine world adventures.
Cheers!