This is only the second time I've mentioned the Moat Mountain Brewery in my blog, and that’s because you can’t get their beers everywhere. But then again if you could, they might not be the hidden gem I have found them to be. They are local, North Conway, NH, and at least one of the nearby craft beer shops nearby does carry their beers. My first taste was at the 2010 New Brewers Festival where I had their cask drawn Imperial Stout. That beer is a serious drink and coming from a cask where it is still living and fresh made it a real treat.

This week for my Local Spotlight I chilled down a bomber (22 oz bottle) of Moat Mountain Belgian Style Tripel for some thoughtful consideration. I actually picked up this bottle at Downeast Beverage Company in Portland, ME during my recent One Day Scavenger Hunt for food and drink. 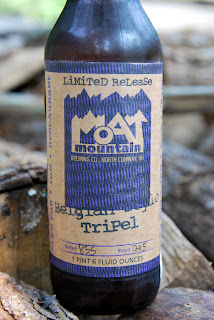 The beer pours an orange/gold color with an off-white head that doesn’t stick around too long. The beer sounded crisp when I poured it. The nose is pretty big and full of spice and yeast aromas. The nose definitely locks this beer into the style correctly. In the mouth the beer is malty and a bit sweet but finishes very crisp with hints of hops and fruit along the way. This is a full bodied beer and although the finish is short, it is flavorful and clean.

As I drank the beer I hit the web to find out more about Moat Mountain. Moat Mountain was started by Stephan Johnson, a Johnson & Wales alum and restaurateur in Portland, ME area. In the late 1990’s he acquired the Scottish Lion Inn property and set about executing his vision for Moat Mountain which would include a brewery, restaurant and inn. Since officially opening in 2000 Moat Mountain has received acclaim from Yankee Magazine and is seeing positive reviews at TripAdvisor.com.

Moat Mountain brews year round with consistent offerings that includes a Weiss, Pilsner, Pale Ale, Brown Ale and a Stout. Their seasonal and limited availability brews range from the Tripel I am tasting now to a Mai Bock, to a Lager and a Blueberry Wheat Ale, just to name a few.

The last time I was in the Conway area was over the 2010 Christmas holiday and the brewery was not open on the one day I had some time to make a trip. I also couldn’t find any of the beers in local Conway stores (the ones that were open) so I hadn’t had it in almost a year. I certainly need to plan a trip sometime soon because this beer is making me really happy!