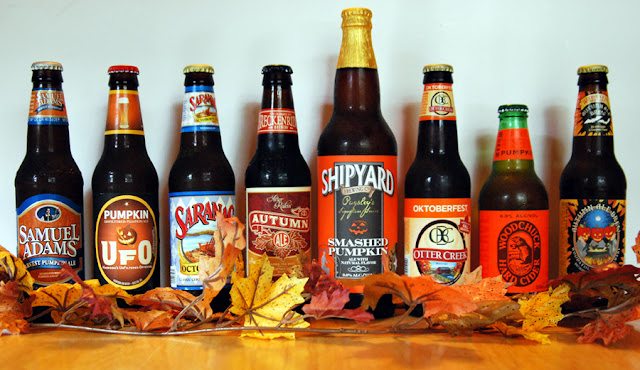 The Ancient Fire Wine Blog has been nominated for a Foodbuzz Blog Award in the Best Single Topic category. Please vote for us and other great Foodbuzz blogs at http://www.foodbuzz.com/pages/awards. Voting is open until October 17th, 2011.

Overall what have we learned from this experience? First, seasonal beers come in two varieties. You have the serious beers that are crafted to reflect an interpretation of the season, and for us in New England this means cool days, yard work and hearty meals. Included in this category are also those beers that channel pumpkin and spices as they are typically used this time of year. What you have leftover are those beers than are made to take advantage of the seasonal beer theme, but don’t really have distinguishing characteristics and/or lack balance within the style. I’ll leave it to the reader to glean which are which from the reviews here and those we published from round 1.

We also learned that even with a halthy range of origins for the 16 beers (NH, ME, VT, MA, CO, CA, DE and NY) one state really shined, Maine! The fact that Maine is the source of good beer is nothing new for me, but to take 3 of the 4 spots in our unscientific survey was a surprise.

Which beers won in this round?

Shipyard Smashed Pumpkin and Breckenridge After Rakin’ Autumn Ale!  The Smashed Pumpkin is in my experience the most talked about pumpkin beer this time of year in New England. It is made in limited quantities and goes fast. Our autumn/brown ale winner once again projected significant roasted malt, nut and caramel flavors with a touch of smoke. It is very full bodied and finishes clean.

Pours a medium amber color with a light brown head. Malt, spices and fruit are presented in the nose. The beer is flavored with apple, which you can pick out pretty easily. Lots of cinnamon, almost too much. (Jason) Drinking several of these could be a problem with the level of cinnamon. The apple ducks out in the middle and then comes back on the finish. This beer is ever so slightly sweet. From New Hampshire

Pours and orange/gold color with a tan head. A bit hazy. It smells mildly like baked squash, but it might not if you didn’t know it was a pumpkin beer. It has a savory element to the taste, a little herbaceous, with some fleshiness from the squash and subtle hops & acidity in the finish. From Massachusetts.

This beer pours an amber color and is brilliantly clear. Watching the columns of bubbles in the glass was captivating. The head is light brown with a red shift and is creamy on the tongue. It tastes of lightly spiced pumpkin pie and has some vegetal character to it. The spices are restrained. Some toasted malt comes through on the finish. Way better than the Sam Adams Oktoberfest! From Massachusetts.

Pours and orange/gold color with a slight haze. Off-white head that lingers a bit. Grains in the nose, not very malty. Margot said hints of cranberry and oatmeal in the nose. I didn’t get that, but hey, she’s weird, and that’s why I like her! The flavors are a bit toasted and the hops make an appearance. We both said there was something funky, not a good funky either, in the latter part and finish. From Vermont.

Orange/gold in color. Aromas of apple, spices and what smells like potato (assuming that is the squash). A bit sweet with some tartness, but only notable for the fact that is it unusual. Not our bag. From Vermont.

Margot says “Kickass Name!” The beer pours brown with a light brown head that sticks around. The nose is full of roasted nuts and malt which continue in the mouth. There is a hint of smoke and no real hop influence. The finish is clean and pleasant. From Colorado

Pours and orange/gold color with an off-white head. We both found malt and dried fruit in the nose. There is lots of carbonation in this beer, but very mild malt and nut flavors. You could use this for pairing where the beer wasn’t expected to add much or take much way, but it isn’t terribly interesting on its own. From New York.

This beer pours an orange/gold color with an off-white head that quickly disappears. I picked up baked pumpkin in the nose and a slight sweet smell. Margot said the aromas were like spiced pumpkin custard. Pretty creative, eh? Both of thought this was the closest of all the pumpkin beers to pumpkin pie. Pumpkin, spice, malt and some hops all come together in the mouth. It does have just enough sweetness to tend in the pie direction, and the pumpkin and spice flavors travel along for the finish. Very well balanced and smooth. From Maine.

We hosted a tasting of winter & holiday beers at our holiday open house last year.  Read our tasting notes in “Fifth Annual Holiday Open House” and whet your appetite for the upcoming release of many of those beers for a new year.

Be careful with seasonal beers, not all of them stack up after you give them a taste. If you can buy a mixed pack of single bottles from a local beer shop that will be a smartest way to try several beers first to find one or more you want to slot in for your seasonal drinking.

I have had a few of these beers and love them! Shipyard is my favorite!

Autumn beers rock. Love that you do this.