Holy wild name Batman! And you might feel like you are wearing clown shoes after drinking this particular beer.

Clown Shoes is a relatively new local brand and from what the label says is brewed at Mercury Brewing in Ipswich, MA. The web site says Clown Shoes was started by a group of beer lovers, and they clearly have some creative ideas for making and marketing beer. I had no idea what I was walking into by choosing a Clown Shoes beer to review in my blog. Search Google for “clown shoes beer” and you will find a series of articles about provocative and sexist labeling, conspiracy theories about who Clown Shoes is exactly, and impassioned votes for AND against their beers.

A beer named Tramp Stamp or Brown Angel with scantily clad women on the label? Say what you will, but if the beer is good the label only adds to the experience. The names and labels are going to ruffle some feathers for sure, but give it a rest, it’s a beer, an adult beverage that adults choose to drink! Walk away if you don’t like it. A little controversy goes a long way these days, and whether intended or not I am betting it has helped business. 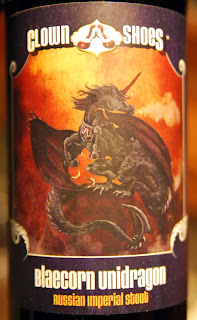 Pours a very dark brown with a thick light brown head. Coffee, chocolate and hops meet your nose pretty quickly. Those aromas translate to flavors and I also found vanilla. This beer is complex and much hoppier than other Imperial Stouts, but that is the beauty of beer, there is something for everyone. I like this particular beer, but in fairness it didn’t grab me in a profound way.

The alcohol is not overtly perceptible, but you won't mistake this brew for a session ale. I vaguely recall having something from Clown Shoes at the ABCF back in June, but I’d have to dig out my notes to see what it was. I am interested in trying some of the other styles and while a 22 ouncer is a bit pricy, it’s local beer and I might find one I really dig!

So that’s my controversial, local beer review for this week.