Earlier this month I riffed on a recipe from the book Down Home: Downtown – Seasonal Recipes fromTwo Sonoma Wine Country Restaurants that Robert Larsen of Rodney StrongVineyards had given me at the Wine Bloggers Conference in July.

I got busy with Regional Wine Week and forgot that I had never published my review of the wine and the pairing. It was still late summer-like when I made the dish, a broiled salmon with a Panzanella salad, which is quite different that the weather today after our first snow and with temperatures in the 40’s. I guess this is my subconscious hoping for what is evident to be just a dream, but alas winter is coming. 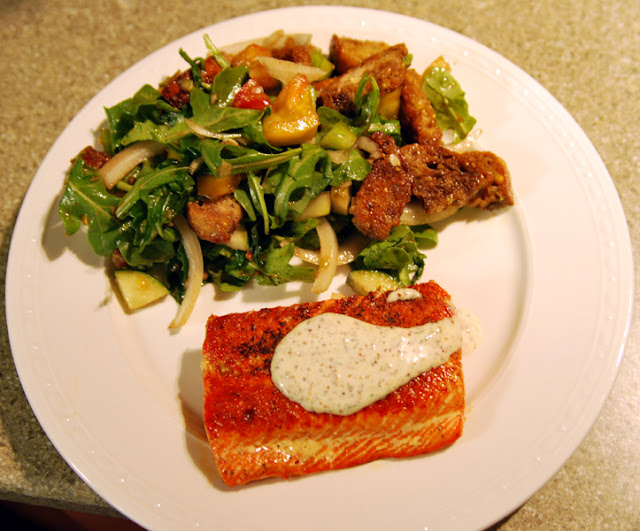 You can find the original recipe I worked from on page 97 of Down Home: Downtown. One thing to note is that there isn’t a recipe for the drizzle shown on the fish in the book’s pictures so I can’t say what the exact flavors were intended there. Here’s what I did:

For the salmon I used an olive oil rubbed cast iron skillet over medium-high heat to cook it to browned on both sides. I then transferred the salmon to a 400 degree oven to finish the cooking. This takes 2-3 minutes per side. This method is dreadfully easy and ensures your salmon has a bit of crisp on the outside but is gently cooked inside.

For a drizzle I made a poor-mans Aioli with mayonnaise, Dijon mustard, garlic and salt.

The Panzanella salad was absent of the corn from the original recipe, contained white onion and had two kinds of sweet heirloom tomatoes from a local farm.  The dressing was made as it was described using balsamic vinegar, garlic, shallot, olive oil, salt & pepper.

Having recently perfected the above cooking method for salmon there is no way that part of the dish could have been better. The faux-Aioli was excellent and the pairing with the wine really did work. That said, I would have used red onion in the Panzanella salad. White onion was what I had and it just didn’t measure up. There was nothing wrong with the salad, I’m just imagining home much more I would have enjoyed it. The addition of the corn would take it up a notch as well, so do it if you make this dish, or something like it. 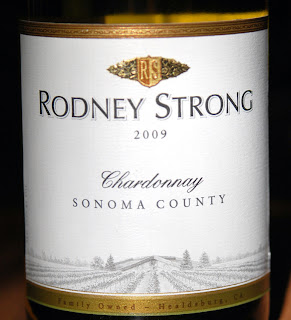 The Rodney Strong Chardonnay suggested in the book and that I paired with the dish is from the Sonoma County series and is easily accessible in my local state liquor stores. The nose is spicy with a bit of buttered toast. I also picked up lemon and pear. On the palate the pear came back but with more of a baked slant to it. The oak is nicely balanced to be more on the spicy and not overtly woody side. The acidity of the wine is healthy enough for a clean finish.

The wine and the fish were a great combination, the roasty crust on the outside of the salmon was balanced by the oak and the acidity of the wine helped offset the subtle fatty character typical of salmon.  The wine and the salad weren’t as well made of a match, but there was nothing off-putting when they were combined; there just wasn’t any magic.

If you are dealing with the onset of winter like we here in New England I hope this late summer meal offered a welcome distraction for just a moment. If not, go out and cook something befitting warm weather just because you can.

Pretty dinner! Is the Rodney Strong chardonnay any less buttery than it used to be? The last time I tasted it (a couple of years ago), it was way too oaky for me.