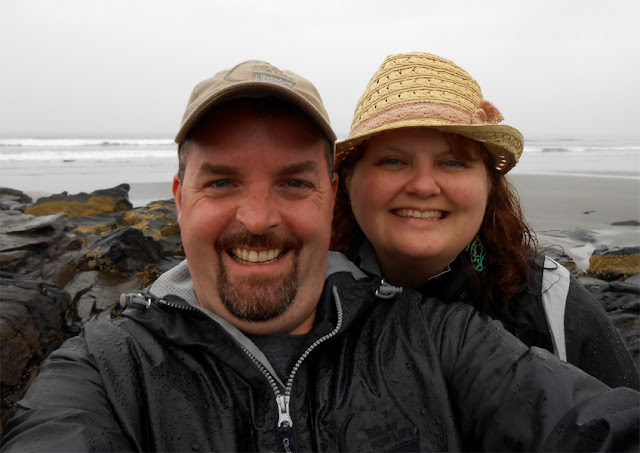 One day in Maine. What do you do in Maine on a cool, rainy day right after Labor Day? Well, you make the best of it. When Margot and I scheduled the day off, Margot’s actual birthday, we envisioned a warm, sunny day hanging out on a nearly empty beach (kids back in school, suckers!) enjoying the last remnants of summer. Nope. Low clouds, mist, rain, cool winds and no real motivation to hang on the beach. The beach was empty though! 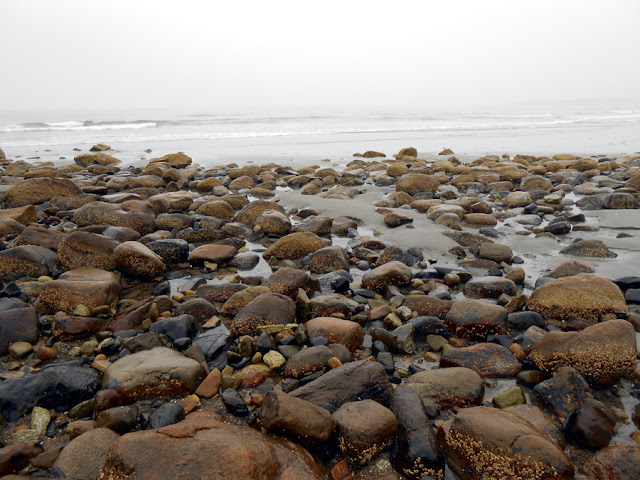 ( I still find this natural beauty worth any amount of time I can get with it. )

We did stroll on the beach during a lull in the rain, Long Sands on York Beach to be exact. Very empty and with the tide out we got to walk almost the whole length and back. We’ve walked those steps in the rain while on vacation here before, and like I said we had to make the best of it. We mocked the birds who were clearly weary of the silly humans, peered into the tidal pools between all the rocks, watched the surfers and shot the shit while we walked along. It really is the simple things in life.

From there we headed off to Portland angling for some tasty fried seafood and a jaunt through the shops adjacent to Commercial Street. The rain came back in force, but luckily that was in between getting to PortlandLobster Company for lunch and heading out after demolishing more than our share of fried delights. The shops were fun but not a big draw. This day sounds pretty freaking exciting doesn’t it? And where is the inspiration I refer to in the title? Keep reading. 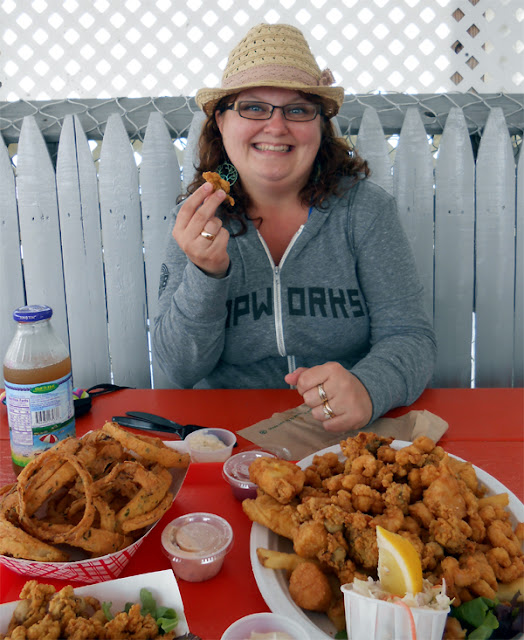 Our final stop was the Allagash Brewery. I’ve been drinking Allagash beer for about 10 years, or at least as long as we moved to NH (2001) and I started seeing their beers on tap and in the stores. First came the White and then the Tripel for me. I’ve taken down my share of their Dubbel as well. But until this day I hadn’t stopped in to check out their tasting room and retail shop. Why? Who the hell knows, I just hadn’t. When a beer is so readily accessible it is sometimes easy to forget to head to the source I guess. 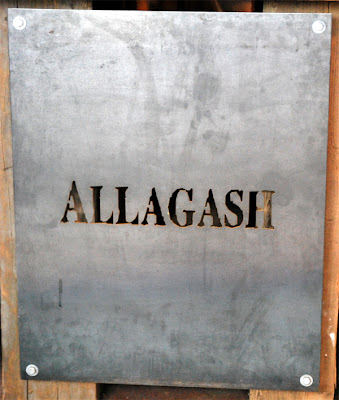 I won’t say I LOVE Belgian beers like they are all I drink. But I do very much appreciate Belgian and Belgian-styled beers. When I got to Montreal I find the concentration of Belgian-inspired beers to be a magnet for me. I've made several Belgian-style beers over the years and enjoy them so much they never last very long.

Allagash makes Belgian-styled or Belgian-inspired beers, in New England no less, and that is the key reason why I have become a fan of their products. Visiting now was timely for Margot and I. We are planning on making a Belgian Dubbel in October and feel that we need some inspiration. We also have a return trip planned to Montreal before we brew. That ought to cap off our need for experience before we fire up the brew pot! 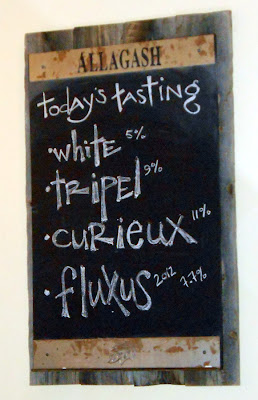 The flagship beer at Allagash is the White. A Belgian-style wheat beer brewed with coriander and orange peel, this style of beer has become pretty common lately. The macro-brewers have gotten into the game, admittedly this style of beer is a straightforward way to introduce a bit of character to people’s drinking habits, but nothing brewed in those large volumes is going to touch the complexity and nuance of the Allagash offering. This was the first beer in our tasting and oh the memories it brought back! Smooth, creamy with just a little spice and tartness in the finish. 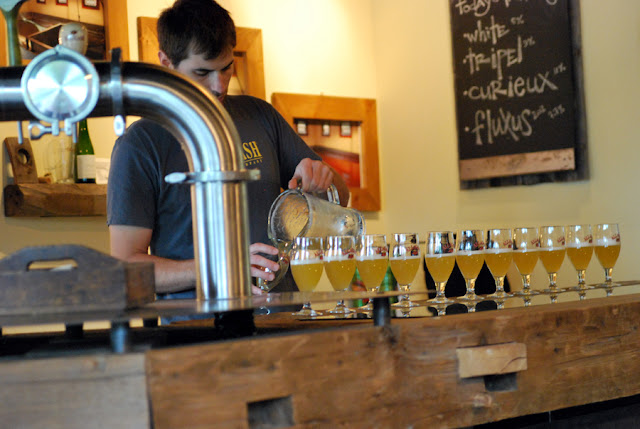 ( Pouring the White for the tasting participants. )

Next up was the Tripel. This is another of the Allagash beers that I can readily buy at home. I’ve taken down my share of 22 ouncers of this high ABV (9%) beer before, and it really does pack a punch. But it tastes so good! Honey, island fruits and grassy notes all wrapped up in a light bodied, cloudy ale with a smooth finish.

From there we ventured next to the Curieux, the Tripel aged in Bourbon Barrels. The difference here is both the strength (11%) and the wood aging notes including vanilla, coconut and of course bourbon. This shit (used for emphasis) is incredible! If you like the Tripel and like how wood aging affects beers, this is the Allagash beer for you! I am thinking that buying only one to take home was nowhere near enough! 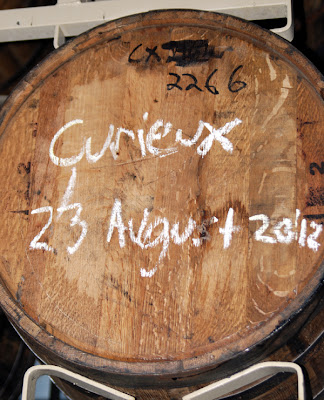 ( Could you load that right into my jeep. I'm looking for LARGE format here! )

The last beer of the pre-tour tasting was the Fluxus. Fluxus isn’t a single beer, rather a slot that gets filled with a different beer each year brewed in commemoration of the first Allagash sale in July of 1995. This year's beer is a Golden Strong Ale brewed with green and pink peppercorns. Another ringer for me. I love the Golden Strong style (that is what I made in May) so this was a real treat. Another one in the basket to bring home!

The tour wasn’t actually hugely notable for us. This might sound arrogant (it is really experience though) but when you have toured as many breweries and wineries as we have AND make your own, a tour of a brewery doesn’t typically offer much unique or interesting. We didn’t get to see the Coolship (an open fermenting vessel for wild yeast fermentations), but I did ask our guide if there had been any analysis of the yeasts that have been found working away on the Coolship brews. The answer was yes and that there were some interesting, but non-public findings. None of the Coolship series beers, released randomly and typically without notice, were available for purchase which just means I have to plan to go back! 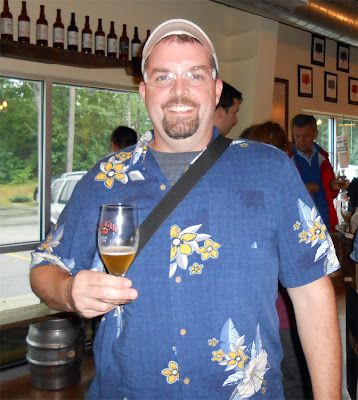 ( Yeah I know, the safety glasses are hot! )

Since the Dubbel wasn’t being poured but was available for purchase, that and some of the Black Ale (Belgian styled Stout) also came home with us. A sit down with the Dubbel is going to be necessary before we finalize the recipe for our upcoming brew.

Our final act in honor of Maine was to use the lobster meat we bought at the Harbor Fish Market to make colossal lobster rolls. Damn good I tell ya! 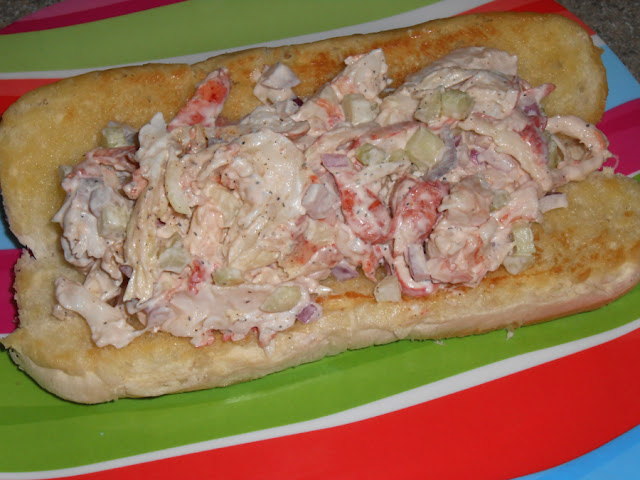 So how’s that for one day in Maine including an inspiring trip to Allagash Brewing that will reflect it's influence on of our homemade beers creating future enjoyment for us and our friends?