Hunter Valley. Semillon. Not knowing much about either I jumped at the opportunity to taste a small lineup of Hunter Valley wines; not only Semillon, although it was the star. Little did I know that as part of the experience I would be taking down Semillon Oyster Shooters with the winemaker!

Big thank you’s for organizing and hosting the event go out to Iain Riggs (winemaker & co-owner) and the team at Brokenwood Wines, Joyce Hulm and the fine folks at Old Bridge Cellars, the staff at Towne Stove& Spirits and the leadership of the Boston Sommelier Society. We were very well taken care of!

Not knowing anything about the Hunter Region (best known as Hunter Valley), except that it is located in Australia, I asked Iain Riggs to explain a little bit about the region. The Hunter Valley is located north and west of Sydney and is considered warm and sub-tropical. I did some research after the event, finding that the Hunter Region is considered one of Australia’s warmest and wettest regions. Temperatures range from the mid 70’s (F) at the height of the growing season to just below 40 (F) in the winter. The region’s proximity to the coast is a key influence, allowing for the cooler air and moisture to be drawn in from the ocean. One of the region’s challenges is rainfall (the average at Brokenwood is 29 inches annually) which can come heavy in that sub-tropical way some of us might imagine. And most of it comes during harvest months, creating significant hazard. The relatively higher humidity of the region also creates disease stress, something Riggs noted as a particular challenge for the 2012 harvest. 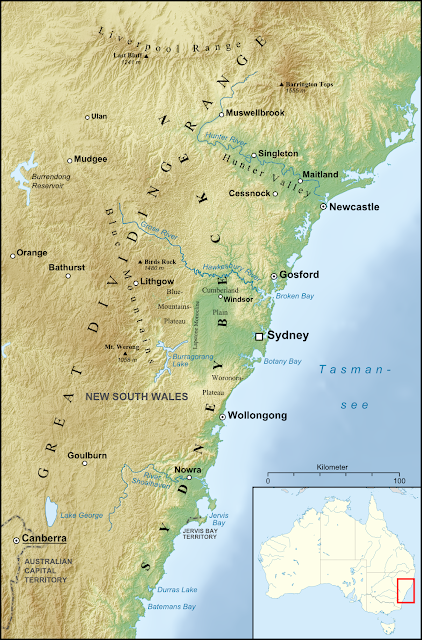 ( The Hunter Valley extends Northwest of Newcastle on the coast.
Approved use by WikiMedia Commons)

In 2012 Riggs completed his 42nd harvest as a winemaker and his 30th with Brokenwood Wines. When I quipped, “that’s a lot of us experience” his response was “yeah, it definitely is.” I asked how things had changed in 42 years working in the Australian wine industry and his response was less specific, yet no less telling. Riggs said, “wine works in cycles and I’ve seen quite a few of them.”  I didn’t get a chance to ask what the current cycle looked like, but we were gearing up to taste the first wine so a topic switch was reasonable.

Joyce Hulm from Old Bridge Cellars had set us up in the upstairs bar at Towne and proceeded to get the 2010 Semillon poured for everyone. I’ve had a couple Semillon’s from Australia before, but this was early on before I kept good track of what I was drinking so I have no useful recollection. I immediately pulled lots of lemon from the nose. The minerality and steeliness of the wine was also accessible in the nose. On the palate the wine married a bit of melon with the lemon and I found savory herbs hiding in the finish. There is some body here, but just a little bit to consider. In conversation with TJ & Scott comparisons to both Pinot Blanc and Sauvignon Blanc arose. The three of us kicked around the similarities and differences and considered the seafood pairing scenarios of each. Both are close but neither is a layup for me. Pinot Blanc is the closest, especially those that project a bit of creamy texture from neutral wood. Sauvignon Blanc is too grassy, green and the acidity is far too razor sharp for me to make the link. The finish of this wine is short (not to a fault) and all together the wine does not present as complex, rather very straightforward and VERY drinkable. The acidity is healthy, but not racing mad, and works very well as a palate cleansing function. This is a slam dunk for an aperitif or cocktail party wine. This and the other two Semillons we tasted next range in alcohol between 11 and 12 percent. 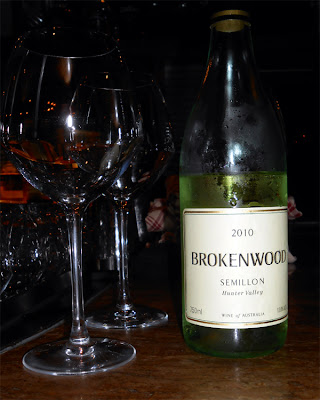 The next wine we tasted was the 2006 Oaky CreekSemillon. The reserve Semillon’s from Brokenwood are now released with six years of age. I anecdotally knew that good Semillon was age-worthy, but this was my first real test of that idea. The wine is creamy and herbal with restrained citrus and minerality compared to the first wine. The body is noticeably bigger and softer. Hints of lanolin made me think of Chenin Blanc. The mellowed acidity further enhanced the perception of body, but this is no flabby wine. This wine is also drinkable, but is a much different wine requiring different position than the first. Paired with seafood, lightly prepared white meats, some salads and steamed vegetables is where I would place it on the table. 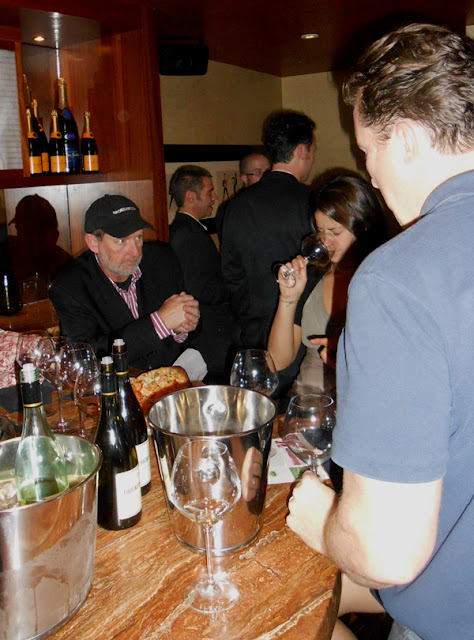 Right about then the food arrived. Lobster pizza. A few moments later Riggs wandered over to where I was sitting and pulled up a chair. My immediate question was “how do you see your Semillons best paired with food.” Having already noted that I would expect seafood pairings to work, I was eyeing the lobster pizza. Riggs echoed this and as he was talking the raw bar consisting of oysters, prawns and lobster tails arrived. The flavors of the lobster on the pizza popped with the wine. The corn, honey, ricotta cheese layered on the thin crust all came together nicely. 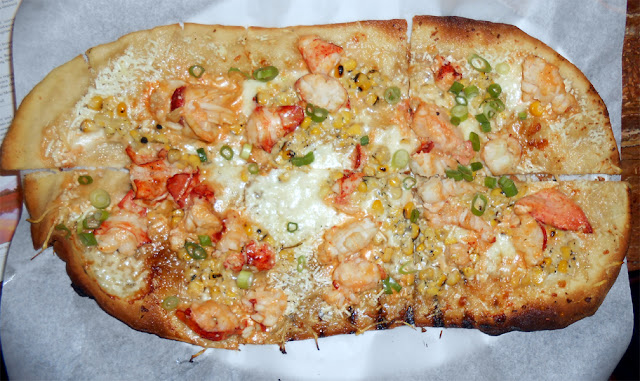 Next up was the 2006 ILR (think winemaker's initials) Reserve Semillon. This specific wine was made from a single block in Oaky Creek vineyard, but the grape selection for this wine varies from year to year. The nose on this wine was the lightest of the three with more of a toasty, creamy shift. The wine tasted of lemon candy and lime curd, the texture and body helping to bring these flavors out, with only some of the minerality and herbal notes I found in the other wines. 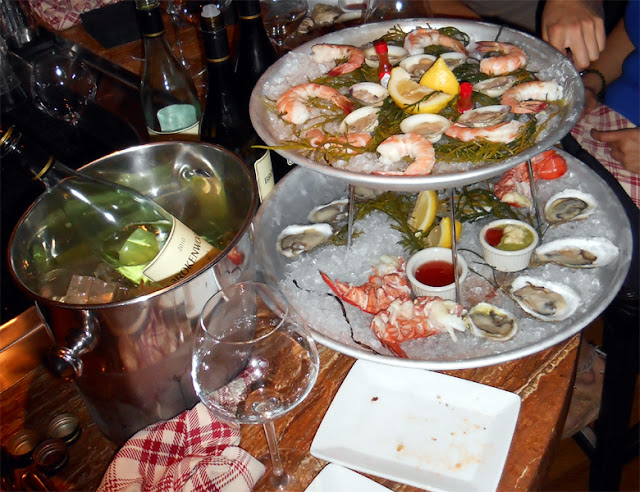 I’m not much for oysters on the half shell, but Riggs suggested a shooter whereby the Semillon was poured over the oyster while in the shell and that it be shot like that. With that encouragement I walked the walk. Pretty good. I don’t mind the brininess of oysters, but I did find that the 2006 ILR with its restrained acidity was slower to clean up the trail of the oyster than I am used to. I shot a second one with the 2010 Semillon and got the affect I was familiar with. That would be my recommended pairing from these wines for folks who like a quick and clean exit from oysters. The 2006 ILR Reserve wine was delightful with lobster tail and prawns. The flavors in both meats were readily accessible and were gently cradled by the creamy notes in the wine. Almost like having a little butter where there was in fact none.

Back to the age-worthiness. While we were talking Riggs said I should consider coming back to this very wine in five and then another ten years. He said they would still be lively and equally enjoyable the same way they were tonight. I asked him what an unusual pairing for an aged Semillon might be and he suggested lemon meringue pie. Both being acidic, he feels that the wine can stand up to the sweetness in the pie so long as it is tart and not overly sweet. I think that the creaminess in the wine and the texture and flavors in the crust would be worthy matches as well. Exceptional!

I then asked what he looks for in the reserve wines in order to the select them. Overall they are selected for their purity, balance and acidity, a primary indicator of the ability to take age. The desired results when the wines are aged is that stay balanced, the nest can offer up lime juice and talc. In describing the acidity he used what he said was a specific Aussie winemaking phrase, “line in length”. Clarifying the phrase, he said this is the “acid drive” in a wine. A young wine that has a line of acid right through it that is also in balance from beginning to end is said to have “line in length”. Such young wines are great young and have the potential to go on to be great aged wines as well. 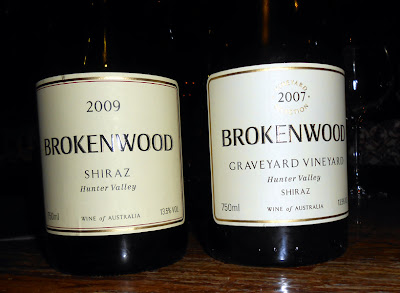 We finished the tasting with a migration to Shiraz. First up was the 2009 Hunter Valley Shiraz. I really liked this wine. It is dry and doesn’t all try to be juicy or meaty like some Aussir Shiraz is known for. Bountiful red and purple fruits play in the dry tannins and moderate acidity. There are vectors of spice and smoke, but not jarring or out of balance and the alcohol clocks in at 14%. The moderate finish contains some savory herbal or leafy note.

The final wine was the Graveyard 2007 Shiraz. This wine is made from grapes harvested from an mid-20th century vineyard now producing Brokenwood’s flagship red. As Hulm was pouring the wine she explained that in Australia the Brokenwood Graveyard Shiraz is considered the third best Australian wine only two steps down from Penfolds Grange. Wow, that is esteemed company! That said, this wine isn’t quite as expensive as Grange, but not by much. I don’t punish wine on price, but it does mean I will not have many future occasions to savor those higher price point wines that I enjoy at tastings.

The nose on the 2007 Graveyard is earthy with lots of red fruits. Just from the nose you know this is a bigger wine. And it definitely is, but I still feel is shows some restraint in the pantheon of Aussie Shiraz. Bold and spicy this wine definitely makes you stop and consider it. There is no doubt this is a wooded and aged wine, but again it is balanced and not at all hot. At 13.5% ABV is is bold, juicy, but not hot. The wine is not bone dry and has plenty of tannins to hold the structure of it together. 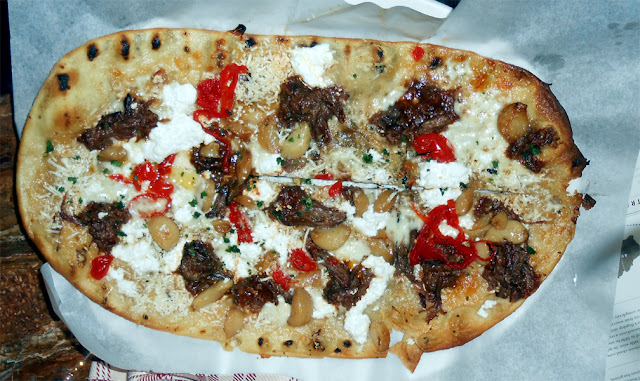 With the BBQ short rib pizza I preferred the 2009 Hunter Valley Shiraz. It is friendlier to food in my opinion, its austerity and restrained weight being more versatile, and I feel these attributes also  mean it can span a broader range of palates with or without food.

So what did I learn? Semillon is really great with seafood, but it presents much more opportunity than that. The right white wines, good Semillon in this case, can in fact be aged for several years before release and not miss a beat in the glass. When a winemaker says “you going to do an oyster shooter?”, unless you are allergic, you follow their lead and do it. Warm growing regions can produce wines with reasonable levels of alcohol that are still balanced overall. I had forgotten how much I enjoy well-made wines from Australia.

The title of this post could have also been “show me the way” and afterwards I could have happily asked "do you feel like we do?" Big thanks to Peter Frampton and Frampton Comes Alive for being the soundtrack to my late summer