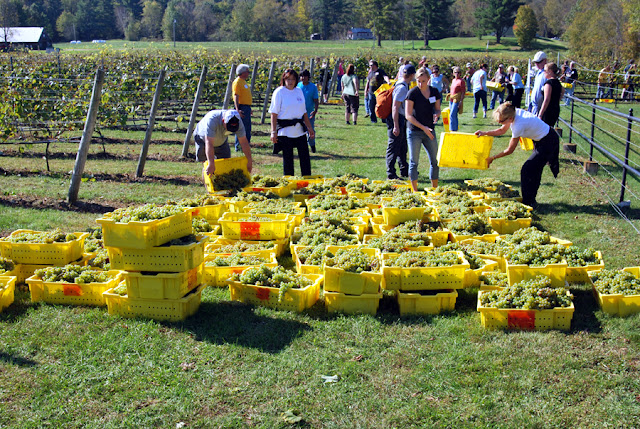 Wine lovers have their own religion and their own politics. After getting a bit of a handle on the many differences within the community I have found that it all makes as much coherent sense as so many other things in our society, e.g. not much. A great many different perspectives based on diverse experiences are brought to bear, and the veracity of personal opinions turn preferences into crusades for supposed authenticity.

One of the points of contention between different groups of the faithful is the "localness" of the wine. Simply stated we are talking about the hierarchy of "locally grown" above "locally made". I'll also add to this the sense of place that surrounds the locations where "great" wines are grown and why that makes them more special than wines made combining multiple and "lesser" sources either local to the winery or much farther afield. Is this really true? Better for who? There is plenty of historical precedent for places and rules, and I am not suggesting at all that their shouldn't ever be any rules; but what exactly makes sense in the New World when the goal we all shouldn't lose sight of is fostering business and making money flow so people have jobs? We aren't the old places and not everyone wants to be them, so why are we trying?.

There is a glut of murky terminology used by some actors to try to distinguish themselves in this and other regards in the wine world. Words like real and honest are hard to clarify in the context that folks try to apply them. What is the opposite called and what is the specific difference? Unreal and dis-honest don't make sense. How is a wine made from grapes from out of the area not real or not honest, especially if the source is disclosed by the winemaker? Why should they not be allowed to do this if it makes business sense for them? Don't we want the market to mete out what of those types of choices work in the long run?

The 800lb gorilla (which Tom Wark nailed this week) goes like, "so all respectable craft should be 100% local?" and this question is still out there. I say no just on the principle that our societal evolution to a global network requires some accommodation for the new and different. Do we hold beer, all food, art, music, furniture (again Tom nailed this), etc, etc, to the same standard? If yes, ok; let's just say that such people are a mighty specific group and if this is how you roll, by all means go for it. If the answer is no, then why do we hold wine to such a standard?

What are the goals? That depends. At first glance you have a consumer perspective and a producer perspective. Sales trends suggest that while the majority of wine drinkers still don't choose to know what they drink much better than it takes to acquire it. Trends in craft beer, small production wine and micro-distillation do support the assertion of an up-tick in interest for wines that are produced on a smaller scale by someone with a specific principles and a passionate story driving them to make the stuff. The consumer is then two groups, one containing the average consumers and another containing something else, a super-consumer if you will.To the super-consumer people, places, specifics and philosophies do matter, but only because they choose for them to.

To me this is really a matter of taste, and I consider one of Terry Thiese's philosophies as a good guide. Don't look or talk down to people who have tastes such that they don't really appreciate wines that are universally considered fine (or meet your standards, whatever they may be), but in return don't allow them to suggest just because they have different tastes that your own refined tastes should be reviled as pretentious bullshit. Walk on the other side of the street if you want, but calling them out and suggesting that their lacking (your opinion) and the products they like shouldn't be allowed is just poor form. If you want your wine more or less local, have at it! Mine isn't better for me than yours is for you, and vice versa. Whether we recognize the fineness or localness in the product doesn't say anything good or bad about it or ourselves.Can't we all just get along?

Producers have a range of motivations, but for so many that I have asked these questions of they say they WANT to do as much as they can themselves and/or locally, but they are also trying to run a business and having options always make that process less stressful. There is plenty of theology thrown around when you get a group of producers talking about this topic, but in places where they are used to collaborating and working well together, you'll be sure to see more than one ranking opinion! If they don't agree on a "right" way, what are consumers doing pushing a more specific agenda?

Assuming anyone reads this I expect the flames to be duly fanned. I support a range of choices and drink what I like after I have experienced it in a way that fits my needs. I don't tell other people what they should or shouldn't drink and I definitely do not tell producers how to run THEIR businesses. But that doesn't mean I won't ask questions and won't make recommendations that all together are designed to increase the transparency of how products are made so producers can make what works for them AND consumers can choose the products that fit their politics the best. How do you do wine?

Hey Jason:
I don't think using Terry Theise to try to support your argument works. He definitely differentiates between "authentic" wines and those he calls "confected." He would not see a wine made with non-local grapes as "authentic."

He also believes that all taste is not equally valid, and that anyone who claims otherwise is not discussing taste, but discussing themself.

He states: "If you like Twinkies, eat them. Don't apologize....But don't claim it's just as good as a home-baked brownie from natural fresh ingredients,..." He sees clear distinctions in taste, but he just doesn't think people should be "arrogant" or "inhumane" about it.

Theise sees clear differences in wines, some being better than others. He does not see all wine as being equal. To him, there are clear hierarchies. Not all taste is the same.

He grants that everyone is entitled to their opinion. But he doesn't hold all opinions in the same regard.

I see differences in all of these things as well. In some cases I seem them better than others because I have actually experiences them.

For me it is the "douche" factor in trying putting one choice ahead of others and pushing it like it is the only way. It is conceited and everyone knows it. Why do you think people so often try to use rules and regulations to force an agenda? They want a rule to hide behind so their own conceit isn't the issue.

My choice of Terry Thiese was done specifically because he does make the distinctions, but treats the personal behavior associated with those differences in a way so many people don't. He knows that taking it too far is being conceited and offensive. He won't apologize for having his views, won't hesitate to educate others about what he believes, but he won't insist that a person is worth less solely because they don't make the same choices he does.

What I see is a whole group of people who want consumers to believe that locally grown is ALWAYS better than locally made and that locally made is sub-par in principle. In broad strokes it is hard to argue the Twinkie example, but you can't codify it in so many cases. I can show you a producer locally that makes a better Finger Lakes Riesling than someone in the Finger Lakes. The local FLX zealot is going to split the hair and say well that producer isn't one of the best here so it still isn't better in general. They might be right, but where is the rule here? There isn't one!

When people separate the place from the people solely to make this case they are really being irresponsible. Everyone has a "local" something because someone has chosen to do it in that local place. When we say wine is special, and not local only because you don't grow it yourself or get it nearby, but don't do the same across the boards we really look stupid.

There is no prize to be won here, but the folks who want the distinctions to be more of a concern seem to act like there is.

Yes, Theise doesn't believe the person is less for their personal choice, but he does believe the choices they make can be lesser ones. If someone chooses to drink wines Theise does not feel are "authentic," he won't denigrate the person, but he doesn't accept their choice is as good as his own. Theise would believe, in general, that locally grown wines are better than just locally produced ones.

The Twinkie example was not meant to be an absolute. There are certainly exceptions everywhere, but it can be a valid generalization.